ASML – the outfit that oufits the chipmakers with chipmakers – believes the recent fire at its Berlin factory on 2 January will not have a "significant impact" on its output in 2022. 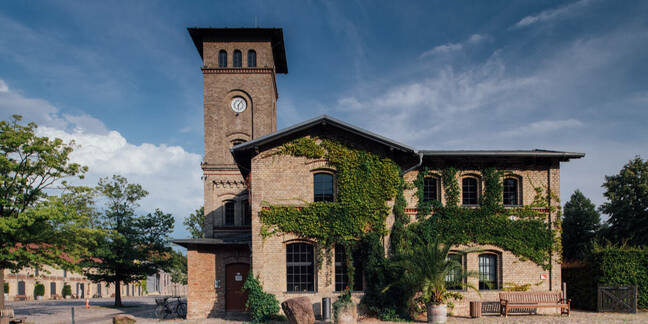 The Berlin factory is located a mere 700m away from Schloss Britz, the former manor-house of the historical Britz village, which is now part of Neukolln, a suburb of Berlin

The €262.42bn market cap company, which reported full year 2021 results today, went on to say it expected sales to jump by a fifth this year compared to last.

ASML CEO Peter Wennink spoke about the fire at ASML Berlin – which broke out at the old Berliner Glas factory site, acquired by ASML in 2020 – in a press conference. That part of the business is now known as ASML Berlin, and several key ingredients of ASML lithography systems are made there, including wafer tables and clamps, reticle chucks and mirror blocks.

Wennink confirmed the blaze took place in an area (estimated by firefighters to be 200m2) where ASML makes clamps for its EUV wafer systems. EUV, or extreme ultraviolet, is a step change in lithography tech, and allows semiconductor-makers to print chips in much finer detail and more cheaply.

He said that although firefighters were able to extinguish the blaze "in a couple of hours... still there was significant damage."

He added: "Now, I must say kudos to the ASML Berlin people, and the people here in Veldhoven [the Netherlands HQ] and in Wilton [its factory in Connecticut, USA]. With a lot [of] creativity, we are where we are today. Which is for DUV, although there were some initial disturbances, we don't think there is going to be any impact on our output for 2022.

"Where the fire happened, it was in the area where we make the EUV wafer clamp, which is a very complex but very significant module that goes into our EUV systems."

"But because of the ... creativity, we currently believe that we can manage the situation and that we will not see a significant impact on our EUV output in the year 2022."

'Low' Q1 revenue guidance not 'as bad as it appears'

The Dutch firm said the immediate downtick was due to differing revenue recognition and an attempt to speed up ship times with a different process for customers to accept the goods. Approximately €2bn worth of sales expected to ship in the first quarter were not included in the Q1 number, it said. Instead they will be recognized in subsequent quarters after formal customer acceptance tests are completed in the field.

The backlog is still significant. Echoing the bosses from across the tech industry, ASML's Wennink told the press conference the "biggest challenge" was that "demand significantly exceeds our capacity".

"DUV is particularly strong. It's across all industries: memory, logic. A very strong DUV demand driven by the chip shortage everybody knows about. We will probably see about a 20 per cent growth of our DUV business in 2022 as compared to 2021."

ASML also said it intended to declare a total dividend over 2021 of €5.50 per ordinary share – this was a 100 per cent increase compared to previous year. Investors on the Amsterdam Stock Exchange seemed pleased by this; its stock is up nearly 1 per cent since the market opened.

Gartner said today that worldwide semiconductor revenue grew 25.1 per cent in 2021, exceeding $500bn for the first time, with ASML client Intel in the number 2 spot after shipping a $73.1bn slice of that. It's a good time to be in semiconductors and everything you need to make them. ®