'Ensure that code you write works with these open standards'

Sir Tim Berners-Lee said today he believes many current global challenges can be solved if people can be convinced to share data – but on their own terms. 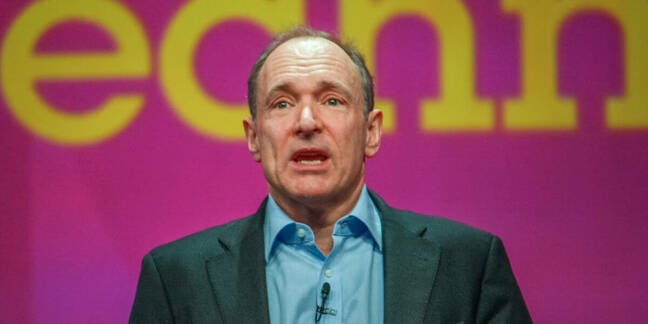 He also said that the internet faces a number of challenges such as getting everyone online and data being used against people, perhaps brought into focus by disinformation campaigns.

The creator of the world wide web was speaking at Fujitsu's ActivateNow: Technology Summit, a virtual event focused on the part technology can play in shaping a better future, and covered his vision for the internet.

Ensure that code you write works with these open standards. That's the way to build new levels. Be respectful of end users

Asked about the current problems facing the web today, Berners-Lee said it had already produced a lot of benefits for the world, such as employees being able to work remotely during the pandemic. However, he noted that many are now concerned about cybercrime and the web being used to manipulate them, citing targeted advertising campaigns ahead of key US and UK votes in 2016.

"If you ask anyone in the street, they will now say they are aware of disinformation as an issue, so there are lots of things we need to do to fix the web," he said.

Another facet of this is the privacy issue, where people's data is being used for inappropriate purposes by corporations to target and manipulate them. Meanwhile, data stored by the social networks, such as photographs, is stuck inside those social networks, creating silos that prevent people from using that data how they might wish to.

Sir Tim has already been working on ways to address this, such as the Solid technology developed by his Inrupt organisation, which allows individuals to store their personal information in "pods" – which the individual whose data it is controls access to. He describes these as "places where you have control over who gets to see your data. For health data, test results will go into your Solid pod, bank transactions go to your Solid pod."

Inevitably, this means that Solid pods will contain a huge amount of information about individuals, but they can decide how it gets used, Berners-Lee claimed, while the Solid protocol allows users to run apps that give insights about their life.

But Berners-Lee said having this level of control will build trust that will lead to greater sharing of data to drive innovation and address some of the problems that the world now faces.

"We find that people are coming to Inrupt saying that they want to introduce Solid technology between themselves and customers or employees, because they do trust them. They find when they do that, give the user control, the user will share more powerfully, share data not only with doctors, but also with researchers looking to cure cancer, for example."

The Solid vision is that people should use Solid pods for everything in order to enable the technology to deliver all these full benefits.

"Large companies want to partner with us, and governments are coming to us because they realise that if people have Solid pods with their data, like with their CVs for example, the country would just be better, you would be able to have a skill inventory of the whole public," he said.

One such partner is apparently the local government of Flanders, Belgium, which has set up a joint venture data utility company with Inrupt to give every citizen access to a Solid pod.

On the issue of the digital divide, Berners-Lee spoke of the "moral and ethical requirement" to fix that discrepency, and pointed to the work of the Web Foundation he helped set up, but said that stark inequalities still exist, even in developed countries like the UK.

"With the pandemic, we found one-third of kids could do work at home, but another third had no internet, while one third had access, but either didn't have a device powerful enough, or their connection was not good enough," he claimed.

The good news is that world is much more aware of this issue, but uptake of the web actually slowed a few years ago, according to Berners-Lee, and as the number of people goes up, the sorts of issues that are being encountered is changing.

"People in developing countries need mobile devices, and cheap data plans. We need to look at rural areas, and also literacy," he said, because if people are unable to read and write, they will have great difficulty in accessing the web.

Asked about the future, Berners-Lee said he wanted to see "the web of data" become very powerful, and talked about what he calls the data spectrum, which covers the range from public data, such as government figures published online, to data such as health tests that individuals will not want to share. But most data will be shared, even if just with work colleagues.

On AI, Berners-Lee echoed the calls from many others for greater openness and transparency. If algorithms are deciding what news feeds you see online, then the developer or publisher needs to be public about how it works, "so if there is bias, let me see it," he said.

This led to a wider call for openness across the web, and for developers to use standards to enable interoperability.

"Innovation on the internet started with Vint Cerf and TCP/IP. On top of that, as it was open, I could enable anyone to do anything, you don't need to ask my permission. Solid is another layer, another level that involves new protocols and a lot of application levels. So, we need lot of help with standards. Ensure that code you write works with these open standards. That's the way to build new levels. Be respectful of end users," he said.

Rounding off, Sir Tim expressed his hope that such moves would allow the broader use of data to tackle global challenges, perhaps justifying the accusations from some quarters about him having an "internet hippie manifesto."

"Let us build a platform so we can build apps and allow those apps to collaborate, so when we tackle a challenge like climate change, we can go to the web for powerful tools to help us solve those huge problems like cancer or climate change together, collaboratively," he said. ®