'Most of our supplies come from outside Europe. This is a dependency and uncertainty we cannot afford'

The European Commission will introduce legislation next month designed to turn the continent into a center of chip expertise and manufacturing.

The EC will propose the European Chips Act in early February, which will boost Europe's infrastructure for the production and supply chain of chip manufacturing, said Ursula von der Leyen, president of the commission, in an address to the World Economic Forum on Thursday.

The goal is to raise Europe's market share of global chip production to 20 per cent by 2030, which would mean quadrupling the EU's current output, she said, and would involve state aid to build "first of a kind" production facilities. 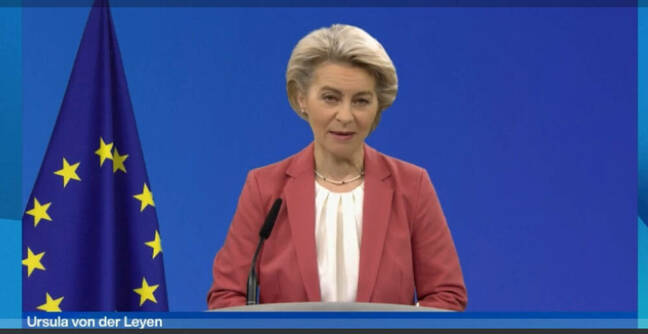 "Today, most of our supplies come from a handful of producers outside Europe. And this is a dependency and uncertainty we simply cannot afford," von der Leyen said. "We will create more balanced interdependencies and we will build supply chains we can trust by avoiding single points of failure."

Europe today relies heavily on factories in Asia for its chip supplies, with shipping and fuel adding to the cost of semiconductors.

The top three foundries in the world, Taiwan Semiconductor Manufacturing Co., Samsung, and Taiwan's UMC, have no presence in Europe, with most of their manufacturing based in Asia and to some extent in the US. These giants accounted for close to 77 per cent of worldwide foundry revenue in the third quarter of last year, according to Trendforce.

The fourth largest foundry, GlobalFoundries, has facilities in Dresden, Germany, which account for just about six per cent of worldwide foundry revenue.

Intel also has facilities in Ireland, which are being upgrading to make 7nm chips by 2023, and is considering expanding considerably on the European mainland. In mid-2021, the corporation said it hopes to invest as much as €80bn into the project, and indicated it will seek government subsidies to part fund this, as previously reported.

Conveniently, the European Chips Act could potentially open up billions in funding from governments to encourage chip companies to boost operations in the region.

"The European need for chips will double in the next decade. And this is why we need to radically raise Europe's game on the development production," von der Leyen said, adding: "The world's production itself will double so this means quadrupling today's European production."

A difference of approach

The US and China are also prioritizing semiconductors and focusing on localizing supply chains. The EU, on the other hand, is looking to strengthen its local infrastructure to supplement a stronger globalized supply chain.

"Europe will always work to keep global markets open and connected. This is in the world's interest and it's in our own interest," von der Leyen said.

The chip-supply concentration wasn't considered an issue until geopolitics, trade wars, and the pandemic highlighted the need to get extra manufacturing capabilities locally, John Abbott, an analyst at S&P Global Market Intelligence, told The Register.

"It has brought in funding from governments that realized that this is a critical matter for them as well if they can't control the supply chains," Abbott said.

At the same time, the globalization of chip research and supply is important for areas like HPC, which is highly collaborative and hard to disentangle, Abbott continued.

The EU-funded European Processor Initiative (EPI) in December concluded the first phase of its efforts to create made-in-Europe chips. One EPI achievements was the creation of Rhea, a processor that combines Arm and RISC-V CPU cores and is designed for Europe's first exascale computer scheduled to go live next year.

The Rhea chip is being developed by SiPearl, whose CEO Philippe Notton in a previous interview with The Register noted that he was looking at creating a processor based on the open-source RISC-V instruction set specification; we note that top-end Arm cores eventually made it into the mix. The goal is to create technology in Europe, and to cut the cost and bureaucracy involved in licensing intellectual property from companies, Notton said.

"Semiconductors, of course we need. Now it's a political fact," Notton opined. ®

PS: While we were preparing to publish this story, it emerged in Time magazine that Intel intends to build $20bn fabrication facilities in Ohio, USA.