As it destroys so it creates

US scientists have discovered that black holes can create as well as destroy, as the observed hot gas emitted from such a void in a dwarf galaxy could have contributed to the birth of stars.

A paper in the science journal Nature reveals how observations made with the Space Telescope Imaging Spectrograph on Hubble revealed the inner secrets of galaxy Henize 2-10, a distance of around 9 megaparsecs or about 30 million light-years (a parsec being a measure of distance, not time, so sit down Han Solo, let's not go down that black hole). 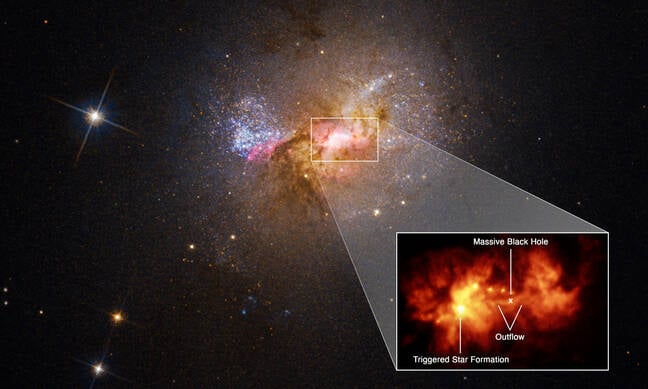 Larger galaxies experience an opposite effect. Gases sucked into a black hole are influenced by surrounding magnetic fields to form a hot plasma jet moving close to the speed of light. Gases in the path of these jets are assumed to be heated beyond the threshold needed to cool back down and form stars, an accompanying report from NASA explained.

"The extent to which black-hole outflows can trigger star formation in dwarf galaxies is unclear, because work in this area has previously focused on massive galaxies and the observational evidence is scarce," the Nature paper said.

"The present study not only adds to the evidence for a massive black hole in Henize 2-10, but it also demonstrates that a bipolar outflow from the black hole is enhancing and/or triggering star formation in its vicinity."

Schutte told the NASA team: "At only 30 million light-years away, Henize 2-10 is close enough that Hubble was able to capture both images and spectroscopic evidence of a black hole outflow very clearly. The additional surprise was that, rather than suppressing star formation, the outflow was triggering the birth of new stars."

Reines said she hoped evidence from dwarf galaxies could contribute to our understanding of the development of black holes in the early universe. ®

Hubble telescope in another tight spot: Between astrophysicists sparring over a 'dark matter deficient' galaxy