Erm... should we be concerned?

Remember how in Command & Conquer: Red Alert 2 you could produce anti-ship dolphin units with some sort of sonic cannon strapped to their backs? How we laughed.

But more than a decade later, Register headlines like "US Navy dolphins, sea lions hunt rogue robo-subs" and "Dolphins inspire ultrasonic attacks that pwn smartphones, cars and digital assistants" became so commonplace that it was clear the real-time strategy game wasn't joking.

World militaries actually train dolphins for all sorts of naval niftiness. Now Military.com, a news website centred on the US Armed Forces, has spilled the beans on something that feels like it should be highly classified.

"Militarized Dolphins Protect Almost a Quarter of the US Nuclear Stockpile," the headline shrugs.

Uncle Sam has 9,962 nuclear warheads at his disposal if he wished to make life on Earth considerably worse than it already is. Military.com says "roughly 25 per cent" of this stockpile is housed at Naval Base Kitsap in Washington state, some 20 miles (32km) from Seattle.

That's around 2,500 (give or take) doses of deterrent sitting in Puget Sound – and the single largest collection of nuclear weapons in the world.

So you'd expect security to be tight. But who did they shove on the front line? These guys (NSFW).

OK, that rather lewd example of the breed appears to be some sort of river dolphin (aka nightmare fuel). And the use of... "tools" is a major sign of intelligence among animals. So yes, dolphins are highly trainable, but what do they actually do at Kitsap? Per Miltary.com:

When protecting harbors and ships from mines, as they do at Naval Base Kitsap, the dolphins use their extraordinary biological sonar to detect hazards beneath the surface, whether tethered to the sea floor or buried beneath sediment.

If a mine or other weapon is detected, the dolphin returns to its handler, who gives the animal a buoy to mark the location of the device on the surface. Passing ships know to avoid these markers while Navy explosives ordnance disposal divers neutralize the threat below.

For protection against enemy divers, dolphins will swim up to the infiltrator, bump into them and place a buoy device on their back or a limb using their mouth. The buoy then drags the outed diver to the surface for easy capture. 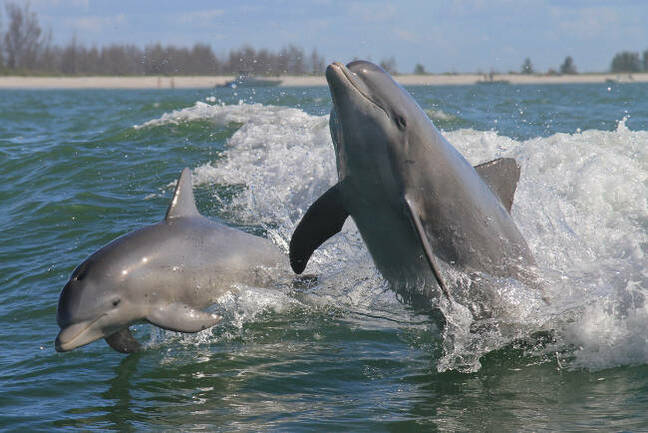 'Find any enemy divers?' 'No mate, I just attach buoys to kelp fronds and watch the chaos unfold. They still give me fish.'

Fascinating stuff. But we'd be interested to know how often a Kitsap dolphin finds mines or enemy divers within a reasonable distance of the stockpile, and surprised if a threat were able to get anywhere near enough for the dolphins to come into play without US intel agencies nipping it in the bud.

We'd also hope there'd be a line of defence that is less distracted by the promise of a decapitated fish.

Also, how do the dolphins feel about this? We know that the cetaceans enjoy interacting with humans, but Douglas Adams believed them to be smart enough not just to leave Earth when its demolition loomed, but also to pull an alternative Earth from a parallel dimension and shift every living thing on the planet to it.

If the dolphins knew they were sitting on god-knows-how-many-megatons of Mutually Assured Destruction, they'd be long gone. ®

After 15 years and $500m, the US Navy decides it doesn't need shipboard railguns after all