But work at US security-linked lab falls short of true ignition. 'This is physics,' they say

US scientists have succeeded in demonstrating self-heating plasma in a crucial step towards self-sustaining fusion energy.

Researchers at National Ignition Facility (NIF) at Lawrence Livermore National Laboratory in California have published a peer-reviewed paper describing how they achieved burning plasma — where the heat from fusing nuclei take over as the main source of fuel heating — across four experiments which each produced more than 100 kilojoules of energy.

The result marks an important milestone towards the promised land of nuclear fusion, but is only one step toward true ignition – where a self-sustaining reaction will produce more energy than goes in. Even then, engineering challenges of efficiency, scale and reliability remain on the road ahead.

Still, researchers at NIF, a $3.5bn US-security facility, maintain it is a significant step forward.

Their approach relies on laser fusion — as opposed to the magnetic confinement fusion approach used elsewhere — whereby 192 lasers focus on a cylindrical container or hohlraum. This 120mm-by-6mm jar converts laser energy into x-rays which heat a tiny plasma capsule at its centre. The capsule has 80 μm (micrometres) thick high-density carbon (diamond) walls and houses the nuclear fuel, a mixture of hydrogen isotopes deuterium and tritium.

As the outer surface of the capsule heats up, it expands, causing the fuel inside to implode and reach a temperature of 50 million kelvin. The conditions result in nuclear fusion — where two nuclei join together and release energy via the strong nuclear force. In the experiment, the fusion produces alpha particles — two protons and two neutrons bound together — which in turn continue to heat the fuel. 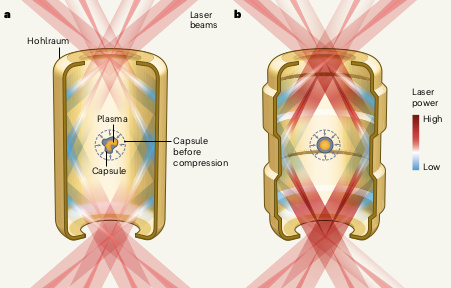 Self-heating plasma: On the left, lasers heat the interior of a hollow cylinder, known as a hohlraum, which holds a spherical capsule containing a plasma of the hydrogen isotopes deuterium and tritium. On the right is the optimised set-up, increasing the symmetry of the compressed plasma, resulting in an energy increase. Illustration: Zylstra et al

The result is reported in the science journal Nature this week, while the experimental design is reported in Nature Physics. In an accompanying article, York University physics professor Nigel Woolsey said the precision and control of the experiments were “extraordinary”.

Speaking to The Register, Woolsey said: "The Livermore work is really important in that they've actually demonstrated laser fusion. For the field — people like me — it is providing lots of confidence and it has sparked a lot of enthusiasm."

The researchers described an iterative process improving the design. The latest breakthrough was achieved by increasing the size of the capsule as a larger volume of fuel leads to a more efficient central hotspot.

Paper co-author Alex Zylstra told The Reg: "In trying to make the capsule bigger, one of the big challenges has been maintaining all the other aspects of the system. We want to make it bigger and keep everything else the same. Basically, it took us a couple of years to get all that right."

Fellow co-author Dr Annie Kritcher said: "We had tried slightly larger scale and we weren't able to optimise all these things at the same time. Another thing was optimising the thickness, the amount of fuel that's in there to give a little bit more protection to the plasma that's at the centre. But everything down the line is impacted and so then you have to go back through and iterate," she said.

While a significant breakthrough in terms of the physics of self-sustaining nuclear fusion, the researchers would not be drawn on what it might mean for practical fusion reactors.

Kritcher said: "For us, it's more realistic to put a timeframe on achieving physics milestones because that's what we've been doing here at the National Ignition Facility, which is a research facility. For fusion energy on the grid, there are so many more aspects that need to be developed in terms of lasers, target development and cost reduction of the targets and, several other things too. For us, it's really difficult to put a timeframe on that sort of technology development."

York University's Woolsey explained that although the experiment had produced more energy than was hitting the target capsule, it was a long way short of producing the energy which went into the surrounding lasers.

"They have demonstrated that the process works, but we have all the other inefficiencies," he said. "You would need need to make the laser more efficient than the laser they used. I don't necessarily know if they could afford to do it, but I think we have the technologies that would enable us to do that. The results have shown the approach is valid that it will be feasible, but not necessarily with the equipment we have right now."

The NIF result has joined other projects in generating excitement around fusion. Other projects include MIT's magnetic confinement experiment, North Carolina Fusion, STEP in the UK (which is looking for a site), and the International Thermonuclear Experimental Reactor funded and run by China, the European Union, India, Japan, Russia, South Korea and the United States.

Despite the significant investments already made, billions of dollars more would be needed to make viable reactors, which might still be decades away. While a promising, clean energy source, in the long term, it is unlikely to come soon enough to be a solution to the climate crisis, which the COP26 conference concluded requires immediate action, Woolsey said. ®