Astronomers have picked up something strange we've never seen before in space: bright bursts of low-frequency radio waves emitted three times an hour from a source within our Milky Way.

"This object was appearing and disappearing over a few hours during our observations," said Natasha Hurley-Walker, a radio astronomer at the International Centre for Radio Astronomy Research (ICRAR) and lead author of a paper about the transmissions published in Nature on Wednesday.

"That was completely unexpected. It was kind of spooky for an astronomer because there's nothing known in the sky that does that. And it's really quite close to us — about 4,000 light-years away. It's in our galactic backyard."

The signals were discovered by Tyrone O'Doherty, a PhD student at Australia's Curtin University, using the Murchison Widefield Array (MWA), a telescope in the outback Down Under. Some 71 pulses were identified as coming from an object code-named GLEAM-X J 162759.5-523504.3 in array readings collected between January and March 2018.

Powerful, periodic bursts of radio waves are a characteristic of a number of known transient celestial objects. Fast radio bursts, pulsars, and active galactic nuclei have been spotted before, though the signals studied by Hurley-Walker and her colleagues are different. These pulses would arrive every 18.18 minutes over the course of a few hours at a time. The team said it's "an unusual periodicity that has, to [their] knowledge, not been observed previously."

The mysterious signals appear to be coming from a type of object never encountered before. Fast radio bursts last just a few milliseconds, pulsars blink once every few seconds, and supernovae and active galactic nuclei tend to spew radio waves over even longer periods of time on the order of days or months. The radio beams from the strange entity, however, last anywhere from 30 to 60 seconds.

These flares are also highly polarized which indicates the presence of a strong magnetic field, Gemma Anderson, co-author of the Nature paper and an astronomer at the ICRAR, said. She believes the object is something very bright, and smaller than the Sun.

The regular pulses every 18 minutes suggest it is probably a single object rotating, Hurley-Walker told The Register.

"Orbital periods of 18 minutes are possible – but not for normal stars, they would crash into each other – only for two compact objects like exoplanets, white dwarfs, neutron stars, or black holes," she said. "There are no models that produce such bright radio emission from two objects in orbit with each other, with such precision, and any that would produce any kind of radio waves would also produce X-ray emission, which we don't see. So, if it's not orbiting, it's likely rotating."

It's possible that it could be an ultra-long-period magnetar, a type of neutron star formed from the core of a dead white dwarf star. Magnetars typically measure just 20 kilometres (12 miles) across, and have intense magnetic fields. They usually emit X-rays in short bursts and are associated with pulsars, however. If the mysterious object is a magnetar, it's unlike any astronomers have seen before. 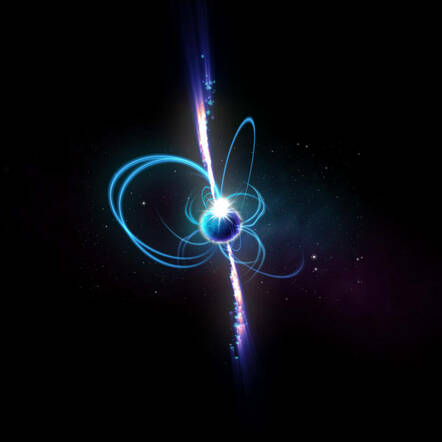 "Pulsars spin incredibly rapidly: a mass greater than the sun, a trillion times as magnetic, all trapped in a volume smaller than a city, rotating every second or even every millisecond. This generates a tremendous amount of energy [known as] 'spin-down luminosity' some of which gets converted in radio waves or 'radio luminosity,'" Hurley-Walker told us.

"As pulsars lose energy, they spin more slowly, and eventually 'die,' becoming radio-quiet. Our source is rotating slowly, so it shouldn't be powerful enough to generate radio waves - its radio luminosity is bigger than its spin-down luminosity."

In other words, it appears much brighter than typical magnetars despite spinning so slowly. The other possible option is it's a white dwarf star that is somehow capable of generating a temporary magnetic field.

"The next step I'm taking is to build a real-time monitoring programme of the Milky Way with the MWA, and I'm seeking funding to keep it going for a few years. This source was active in 2018, and it took two years to detect it, and another year to understand it," she said.

"If we had been looking for these sources every day, we could have detected it within 24 hours, and immediately followed it up with many other telescopes, and the MWA in a high time resolution mode. Then we would have been able to trace its activity over the full three months of activity in enormous detail."

If the object is a white dwarf, she believes it may be visible in optical wavelengths that could be detected using NASA's Hubble Space Telescope. "This experience has taught me that it's worth trying out looking at the sky in entirely new ways-you never know what you might find," she added. ®