Customers in mid-tier band facing up to 50% higher fees... and they're delighted

Updated HP is hiking the UK price of Instant Ink monthly plans by more than 50 per cent in some cases, although the company website is still showing the cost of the soon-to-be out-of-date bands.

The subscription service was launched in the UK in 2014, and "eliminates ink anxiety" according to the US vendor, with a small cartridge in the box re-ordering ink before it runs out. HP also said it "slashes ink costs" in half when compared to the cost per page using most low-end colour inkjet toners.

There were 10 million plus subscribers [PDF] to the service globally as of October 2021, according to HP's Securities Analyst Meeting. The firm said revenues generated by Instant Ink in fiscal '21 were forecast to grow 30 per cent year-on-year to more than $500m. HP reported pre-tax profit from printing for the whole financial year of $3.635bn, up from $2.49bn a year earlier.

Instant Ink's contribution to that income might be more pronounced from next month when HP introduces some changes to pricing, confirmed in an email sent to customers and shared with The Reg. 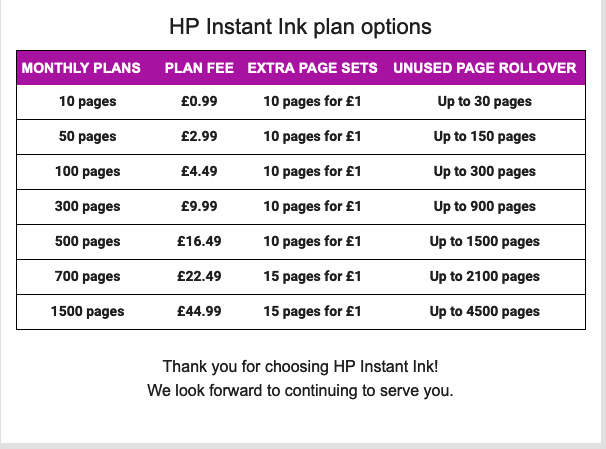 Cost for other plans are unchanged, these range from Light (15ppm) to the top end of 1,500 ppm. "All plans allow you to roll over unused pages up to 3x the plan amount," HP adds in the email. This again is no different to the previous policy.

"Your continued use of the Service after modification becomes effective will indicate your acceptance of the modified agreement. If you do not accept the agreement as modified, do not use the service and cancel it," it states.

Some customers affected by the price increase aren't best pleased. One told us: "The biggest annoyance for me is the fact that there's no increased rollover as an appeasement, its literally pay more or receive less by downgrading.

"Actually no, it's that fact that they're signing up suckers on the old rate today to tell them it's going up in price once they've roped them in. That's more annoying."

Print ink continues to be in short supply during the pandemic, and the cost of materials has risen, but that does not explain why HP chose to increase prices for only two of the seven plans. Maybe it simply wasn't happy with profit margins.

We have asked HP Inc to comment on this, and on whether the prices were going up in other countries in Europe and other continents. So far the company has resisted the temptation to give us an official statement.

The last time Instant Ink was in the spotlight is when HP decided to terminate the free entry level tier that allowed customers to print 15ppm gratis for life.

It subsequently buckled under pressure and told existing customers it would honour the pledge. New customers, however, were told they'd need to pay £0.99 per month. ®

The PC and print vendor has sent us a statement:

HP regularly reviews pricing and makes adjustments based on market conditions while continuing to meet the needs of our customers. For competitive reasons, we don't publicly discuss the details of our pricing strategy. HP provides partners, customers, and resellers with advance notification of price adjustments.

It added that the new pricing plan, which will be added its website from the start of next month, is taking place in each country where Instant Ink is sold.