The US Navy has managed to drop an F-35C fighter jet off one of its aircraft carriers into the South China Sea, just months after the Royal Navy did the same thing with an F-35B in the Mediterranean. 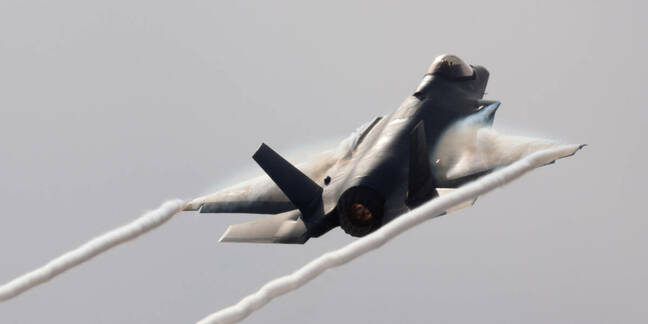 F-35C Lightning II in a high G maneuver (not the craft at issue).

The USS Carl Vinson had what the US Navy described as a "landing mishap" when one of its aircraft ended up in the sea. Its pilot ejected and was picked up by helicopter; he is said to be in stable condition. Seven sailors were reportedly injured in the incident, three of whom were evacuated to Manila for treatment.

Pictures of the $100m fighter jet wallowing in the sea inevitably found their way onto Twitter, echoing a similar situation from earlier this month when photos of a British F-35B jump jet which fell off the front of HMS Queen Elizabeth also ended up in the cold wet stuff.

This picture is an apt metaphor for the entire F-35 program, which after 21 years of development and countless $ billions spent, is still "at sea" https://t.co/bXGja4auJb pic.twitter.com/JZcRKl4SyD

As previously reported, a video of a British F-35B (the short takeoff, vertical landing version of the F-35 Lightning II) emerged when the aircraft suffered a takeoff mishap attributed to deck crew failing to remove a critical blanking cover. The aircraft failed to accelerate on takeoff and instead flopped over the bows of the 65,000-tonne warship.

Similarly, the US jet's landing mishap, which emerged this week, could have deeper repercussions. CNN quoted a former US naval bod as saying China could claim salvage rights over the sunken jet's carcass, gifting the Middle Kingdom direct access to all of its secrets.

Such a move is doubtful – the US is no more likely to let China fish up the F-35C wreckage than elect Xi Jinping as US president – but the fact someone brought it up highlights the tensions over China's territorial claims over the South China Sea, which are not widely supported. The international community largely sees them as an attempted landgrab.

Assigned to Carrier Air Wing (CVW) 2, the jet was carrying out a routine training sortie when the pilot encountered difficulties. The Register had a go on an F-35B simulator a few years ago (well, someone has to endure these harsh assignments to inform the wider public of what's really going on) and landing the aircraft appeared to be exceptionally easy with high levels of automation.

An automation failure would throw the pilot back to basic stick and rudder skills, potentially leading to an accident if he or she wasn't prepared for that. Aviation safety professionals identify such unexpected scenarios as "startle." ®