Now that's egg on your typeface

The decision, by Landgericht München's third civil chamber in Munich, found that the website, by including Google-Fonts-hosted font on its pages, passed the unidentified plaintiff's IP address to Google without authorization and without a legitimate reason for doing so. And that violates Europe's General Data Protection Regulation (GDPR).

That is to say, when the plaintiff visited the website, the page made the user's browser fetch a font from Google Fonts to use for some text, and this disclosed the netizen's IP address to the US internet giant. This kind of hot-linking is normal with Google Fonts; the issue here is that the visitor apparently didn't give permission for their IP address to be shared. The website could have avoided this drama by self-hosting the font, if possible.

"The unauthorized disclosure of the plaintiff's dynamic IP address by the defendant to Google constitutes a violation of the general right of personality in the form of the right to informational self-determination according to § 823 Para. 1 BGB," the ruling stated, as algorithmically translated. "The right to informational self-determination includes the right of the individual to disclose and determine the use of their personal data."

The decision says IP addresses represent personal data because it's theoretically possible to identify the person associated with an IP address, and that it's irrelevant whether the website or Google has actually done so. 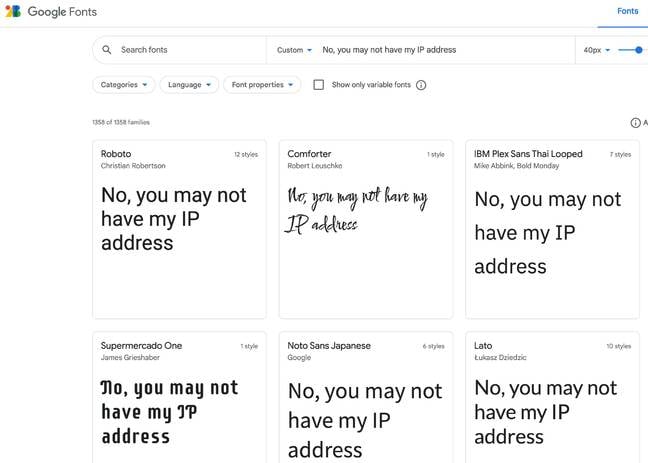 Google Fonts' typeface picker ... With some sample text of our own in light of this case

"The defendant violated the plaintiff's right to informational self-determination by forwarding the dynamic IP address to Google when the plaintiff accessed the defendant's website," the ruling says.

The ruling directs the website to stop providing IP addresses to Google and threatens the site operator with a fine of €250,000 for each violation, or up to six months in prison, for continued improper use of Google Fonts.

Google Fonts is widely deployed – the Google Fonts API is used by about 50m websites. The API allows websites to style text with Google Fonts stored on remote servers – Google's or a CDN's – that get fetched as the page loads. Google Fonts can be self-hosted to avoid running afoul of EU rules and the ruling explicitly cites this possibility to assert that relying on Google-hosted Google Fonts is not defensible under the law.

The German court ruling echoes two other recent decisions, one earlier in January by Austria's data protection authority that found the use of Google Analytics violated the law, and one in December last year when a different German court found that a Danish consent manager's CookieBot program shared European IP addresses with US-based Akamai in violation of EU data laws.

These data privacy judgments complicate how websites and applications can integrate remotely hosted content or services by requiring a legitimate purpose for doing so if personal data gets transferred or lawful consent.

They reflect the consequences of the EU Court of Justice's 2020 decision to strike down the Privacy Shield data protection arrangements that had previously allowed US companies to exchange data with European partners under "Standard Contract Clauses." That ruling is known as Schrems II because it originated with Austrian privacy activist Max Schrems 2011 complaint against Facebook in Ireland.

Google did not immediately respond to a request for comment. ®