Failure can be factored in when you're doing your sums, says vendor

Cloud storage and backup provider Backblaze has released a comprehensive report detailing reliability statistics for the hard drives it operated during the whole of 2021, with an interesting finding on its older kit.

The report leaves out boot drives (which are SSDs) and focuses on Backblaze's data drives, of which the firm had 203,168 under management as of December 31, 2021. These included various models sourced from all four major vendors: HGST, Seagate, Toshiba, and WDC. Of that figure, 409 drives were also excluded because they were used for evaluation or Backblaze did not have at least 60 examples of that model, leaving a total of 202,759 hard drives.

I would expect the larger capacity drives to ... fail more often as they age

Backblaze found that the drive model exhibiting the lowest failure rate was a 6TB Seagate drive (model ST6000DX000), with an annualised failure rate (AFR) of just 0.11 per cent. These also turned out to be the oldest in the Backblaze inventory, with an average age of over 80 months. 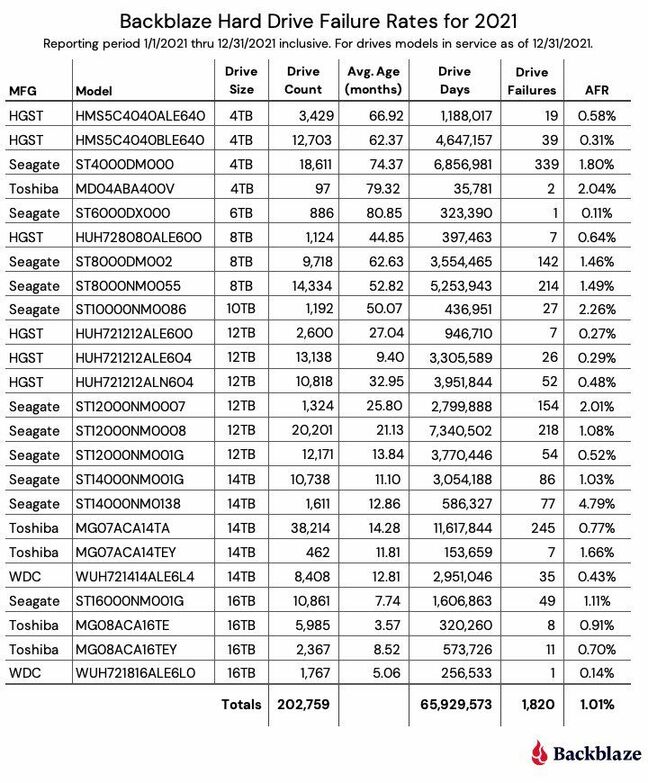 Across all drive models, the AFR during 2021 was 1.01 per cent, slightly higher than the 0.93 per cent that Backblaze reported for 2020. However, both years were down from the rate of 1.83 per cent in 2019, which the firm said indicates that the downward trend is not an anomaly.

Looking back at all the different drive models aggregated together by manufacturer over the last three years appears to show that Seagate's failure rates have fluctuated the most on a quarter by quarter basis, while HGST drives consistently delivered a failure rate of under 1 per cent. 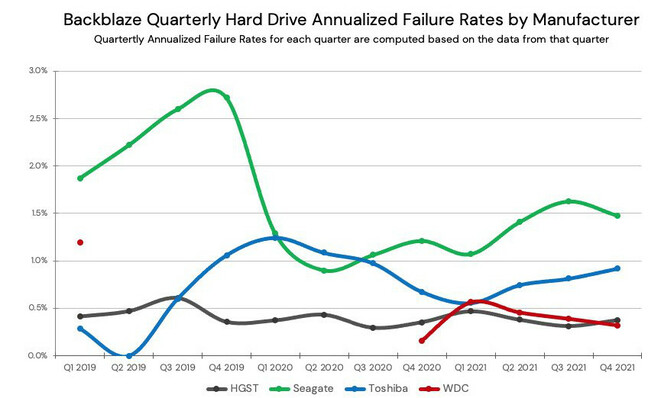 The figures as a chart (image: Backblaze)

Meanwhile, the 2021 figures shows that annual failure rates for the larger drive models (12TB, 14TB, and 16TB) all come in below the annual average of 1.01 per cent across all drives, compared with 1.27 per cent for those of 10TB and below.

Backblaze also managed to solve an issue it had previously reported with 14TB Seagate drives (model ST14000NM0138) failing at a higher than expected rate.

It had the failed drives examined by fault analysis specialists and a simple decision to upgrade the firmware of all the units still operating resulted in the quarterly failure rate dropping from 6.29 per cent in Q3 to 4.66 per cent in Q4, stabilising the rapid rise in failures, Backblaze said.

If any readers are wondering why Backblaze doesn't just focus on the drives that are most reliable, that isn't the way it works, because price is always a factor when procuring storage, Klein explained.

"Our architecture is built assuming drives will fail. We have multiple layers of protection to keep data safe when that happens. This allows us the flexibility to purchase drives based on price as long as they perform reasonably well in our environment," he said.

In addition, when there is a need to replace failed drives, the firm may not be able to purchase the same model again.

The Backblaze report also includes a table of annualised failure rate figures for every drive model it had in production use as of December 31, 2021, covering a reporting period that started way back in March 2013. 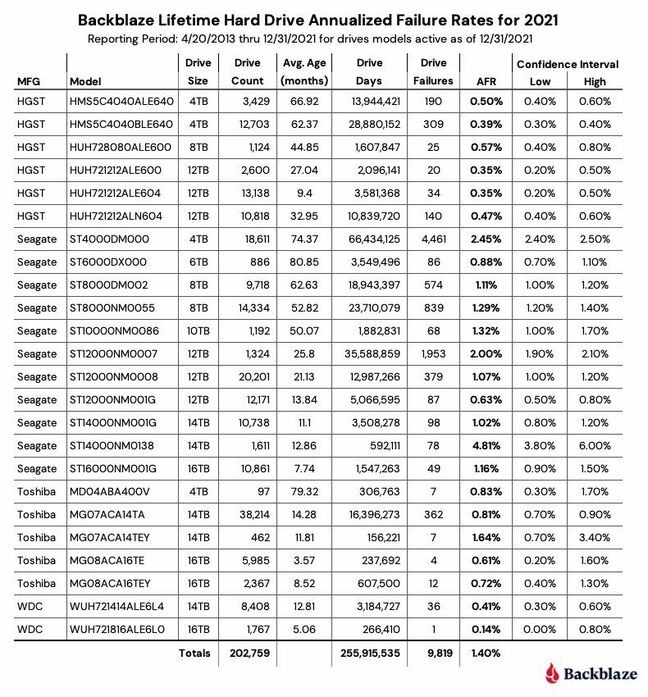 According to Backblaze, the lifetime AFR for all the drives in the table is 1.4 per cent, and continues to go down year after year. At the end of 2020, the comparable figure was 1.54 per cent and a year earlier the figure stood at 1.62 per cent.

However, Backblaze cautions that some of the drives in the table have a fairly wide confidence interval (greater than 0.5) which implies that there is not enough data about that model of drive's performance to have a reasonable level of confidence in the AFR listed, either because the drives are too new or there are too few of that model deployed.

Backblaze will be disclosing the annual failure rates for its SSD drives in a separate post sometime in the next few weeks. The hard drive data is also available to download from Backblaze for anyone who wishes to analyse the figures for themselves. ®