The chances of anything coming from Mars are a million to one, they said – but Perseverance samples just might make it

NASA has picked Lockheed Martin Space as the developer of the Mars Ascent Vehicle (MAV), one of the vehicles that will retrieve samples collected by the Perseverance rover on the Red Planet.

Perseverance is equipped with a drill and 43 sample tubes. Its mission plan calls for those tubes to be filled, then left on the Martian surface so that they can be retrieved and returned to Earth. The rover has collected six samples to date.

While the rover has merrily gone about its sample-collection business, much of the hardware for the Mars Sample Return Program remains on the drawing board. Until today, no contractor had even been appointed to build the rocket to lift the samples from Mars.

That changed when NASA announced that Lockheed Martin Space had been awarded the gig, as part of a contract valued at up to $194 million.

The firm has the task of building the MAV, which will journey to Mars with another craft called the Sample Retrieval Lander (SRL). 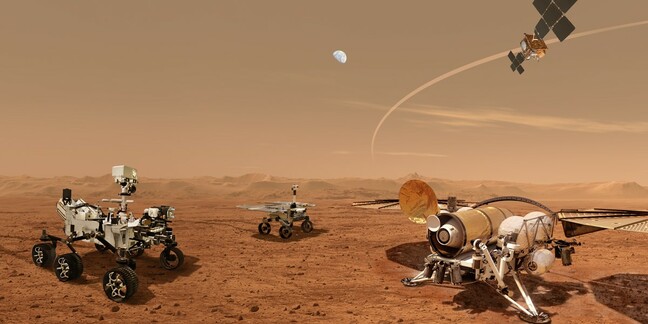 A NASA illustration of the
sample retrieval mission. Click to enlarge

NASA's plan is for the MAV to fit inside the SRL, with the latter craft also carrying whatever is needed to retrieve the cache of samples collected by Perseverance and load them into the MAV. That's probably going to require a robot of some sort.

Once the sample tubes are stowed on the MAV, it will launch into Mars orbit and meet yet another craft: the Earth Return Orbiter (ERO) spacecraft sent by the European Space Agency. The MAV will hand Perseverance's samples to the ERO, which will return them to Earth. Airbus has started work on the ERO design and in June 2021 its efforts passed a Preliminary Design Review conducted by the European Space Agency.

If all goes well, the SRL and MAV will launch in 2026, the ERO will return in 2030, and in 2031 The Register will come up with some fresh Mars-tastic puns to cover the initial scientific assessments of the samples.

Lockheed Martin built NASA's first Mars landers – the Viking program – and says it has been a part of every one of the space agency's Red Planet forays since. Now it has around four years to design something very novel indeed. ®