It's all about perspective

Research published today confirms that what scientists thought were two types of active galactic nuclei are, in fact, one: the features were simply tilted at different angles. 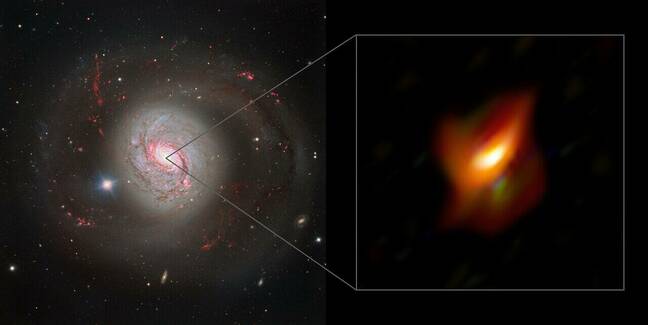 Active galactic nuclei (AGNs) are superbright regions at the centre of some galaxies – they create electromagnetic luminosity thousands of times greater that of entire galaxies from small regions no larger than the Solar System. The energy they produce is thought to be the result of matter falling into the supermassive black holes that lie at the centre of virtually all large galaxies, including the Milky Way. Our own galaxy is thought to have once hosted an AGN.

Type 1 objects exhibit a powerful variable continuum of thermal radiation from gasses heating up as they are sucked into the density of a nearby black hole. At the same time, type 1s show, well outside the continuum, a narrow region rarefied ionized gas reaching 10 to 1,000 parsecs (roughly 30 to 3,000 lightyears) into space. But type 2 nuclei only offer this second narrow line of plasma, which scientists have puzzled over for decades.

"The story of the unified model began around 1980 when I was in graduate school at the University of California, Santa Cruz. I was keen to work on active galactic nuclei, but my adviser Joe Miller described the field as mere 'stamp collecting' because of the wide variety of inexplicable behaviours seen among this seemingly highly heterogeneous group," said professor Robert Antonucci of University of California, Santa Barbara.

Antonucci had been part of a team that discovered "an extremely convenient natural periscopic mirror" which allowed researchers "to view a nucleus from a direction roughly perpendicular to our actual line of sight from Earth."

Polarised light from type 2 nuclei showed the same characteristics seen previously only in the type 1 objects. They figured there was probably something getting in the way of their view of type 2 nuclei, he explained in an article in Nature this week.

"In fact, if astronomers are distributed randomly in the universe, around half of them must classify our type 2 objects as type 1!" he said.

His theory has now been confirmed by extraordinarily detailed observations of the centre of the galaxy NGC 1068 (also known as Messier 77 or M77), at infrared wavelengths in the range of 3 to 12 micrometres, by Violeta Gámez Rosas, a PhD candidate at the Netherlands' Leiden University, and her team.

Their work, published in Nature today, used a powerful instrument called MATISSE, which combines data from the four units of the European Southern Observatory's Very Large Telescope Interferometer in Chile. It details a shadowy torus – or doughnut-shaped – gas cloud surrounding the centre of galactic nuclei which obscures the view if they are pitched at a certain angle to earthbound observers. 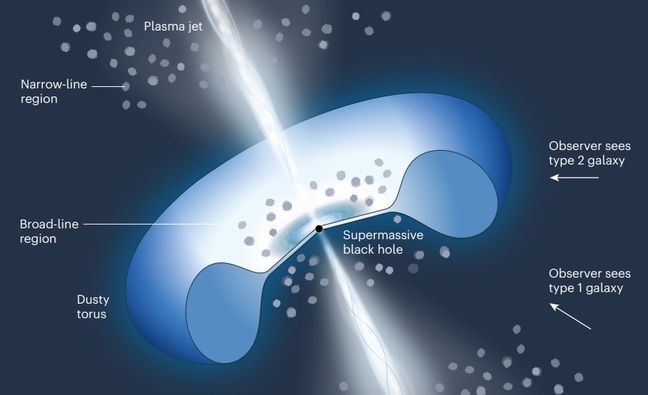 Imaging the dust around an active galactic nucleus (Nature)

Professor Antonucci said the work required "great judgement, technical skill and astrophysical knowledge, because the dust is distributed in a complicated, weather-like way and it absorbs as well as emits."

He said: "Gámez Rosas et al found a compact infrared source at the black-hole position, which, generally speaking, answers the requirements for the active galactic nucleus torus. This is great work!"

In a press briefing note, Gámez Rosas said: "The real nature of the dust clouds and their role in both feeding the black hole and determining how it looks when viewed from Earth have been central questions in AGN studies over the last three decades. While no single result will settle all the questions we have, we have taken a major step in understanding how AGNs work. Our results should lead to a better understanding of the inner workings of AGNs. They could also help us better understand the history of the Milky Way, which harbours a supermassive black hole at its centre that may have been active in the past."

But there is a snag. Professor Antonucci's work predicted the torus would be perpendicular to the plasma jet. In fact, Gámez Rosas' research showed it tilted at 30 degrees. "I predict that, with improved resolution, imaging will reveal that the torus is oriented east-west on the smallest scales," he said. ®