Food for thought on the return to the office

Something for the Weekend? How is your Great Resignation coming along? Still toying with that CV/résumé? Me too!

If you were one of those who switched to a new employer over the last few months, you are possibly in the leisure and hospitality sector, where quit rates are said to double the cross-industry average. Waiters everywhere have been changing tables, as it were; those in retail put themselves on sale; hotel workers went looking for a better reception; cruise line staff have been jumping ship. Heh.

But since you're reading The Register, it is more likely that you are among the usual 3 per cent to 4 per cent of IT workers who traditionally mail their huffy resignation memos to HR every January.

People leave their jobs for lots of different reasons, and it does not take a great deal of imagination to work out why quit rates are so high in leisure and hospitality, a huge industry ruthlessly sacrificed to COVID restrictions. Many of those people quit not just the job but the sector itself so they could work in one that is less precarious, such as skydiving, sword-swallowing or home pizza delivery.

What's your reason? I bet it's that call to return to the office. WFH was perfect, wasn't it? Let's face it, the reason you chose to work in IT in the first place was that you detest working alongside other humans. Me too!

The only surprising development in 2022 is how many non-IT workers suddenly realise they feel the same way. Thanks to the tech you installed for them, the previously office-bound workers of the world have grown a little bit too comfortable commuting between kitchen table and coffee table.

Sure, they hated it at first and complained bitterly at the vast personal expense of keeping their laptop battery charged.

They also quickly realised they'd have to spend hundreds a year on high daytime home heating bills when previously they could, er, spend thousands on commuting into a city centre so they could freeze in an air-conditioned open-plan office, chilblains in their hands and icicles drooping from their noses.

By the way, runny noses are now recognised as a particular IT-user affliction. Nipping into a random store the other day, I found these packets of pocket tissues on sale at the counter: 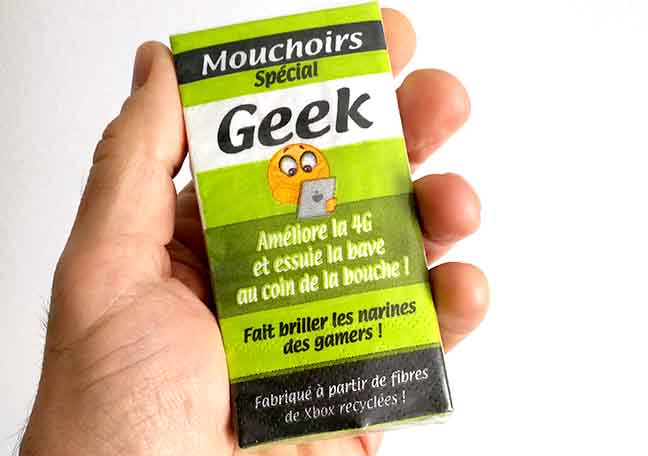 "Special Geek Tissues. Improves 4G and wipes the dribble from the corner of your mouth! Makes gamers' nostrils shine! Made of fibres from recycled Xboxes!"

And here's the back: 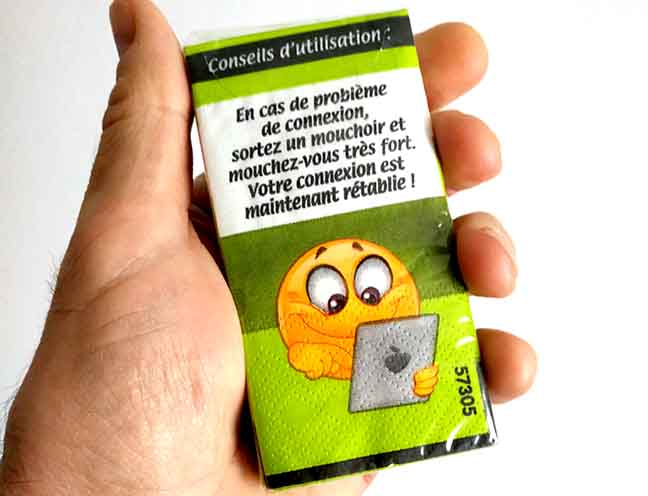 "Instructions for use: In the case of a connection problem, remove a tissue and blow your nose hard. Your connection will be restored!"

After months of complaint, however, many of those lucky enough to have the kind of jobs that allow them to work from home have been very unhappy about going back into the office. They had grown accustomed to those subtle WFH benefits that were previously denied them at their communal seat of employment, such as: a reliable internet connection; adequate hardware and up-to-date software; all-day bad hair and pyjama-wearing; toilets in which nobody has broken the seat or stolen the last roll; and that crucial daytime Netflix performance.

According to the head of consumer research at ParcelHero: "Half of all people lucky enough to keep working from home at least one day a week say it has reduced their spending.

49 per cent of all men and 43 per cent of women report savings on transport and commuting costs." Figures gathered by the UK's Office for National Statistics even indicate that consumer spending on personal credit cards actually fell every time there has been a period of enforced WFH. One must assume, therefore, that the most popular location for whiling away the hours doing home-shopping is the workplace.

To deal with the reluctance of certain employees, colleagues, and even clients to return to real life, organisations have been adopting the wheeze of hybrid meetings.

While these must seem old hat to those familiar with video conferencing, they are a veritable tech freakshow to the average office worker. A hybrid meeting is, of course, just a real-life meeting in a real-life meeting room (or other such venue) at which one of the attendees has logged into Zoom and pointed a webcam in the general direction of whoever they think will do most of the speaking.

Hybrid meetings combine the immediacy of real-life interaction and the convenience of remote communication, and end up with the worst features of both.

I attended one such this week, for the publication of some research into the trustworthiness of information sources. The organisers planned to invite people to a venue to make the announcement, foolishly assuming they would be desperate for some human interaction after so many months chained to their homes. But no: they were forced to open it up to remote accessors who were afraid to leave that funny little space that they reserve in front of their only bookshelf.

One thing I enjoy immensely about hybrid meetings is that nobody is in charge. This meeting was no exception, as we discovered when one remote attendee left themselves unmuted while taking a phone call at their desk. The speakers in the real-life meeting venue paused their presentation in front of their real-life venue audience, thinking that it was a question being hollered from the online audience.

They initially made what I thought was a laudable effort to engage with the person's irrelevant query concerning the cost of cavity wall insulation before realising what was going on.

And on he went for another three minutes while we listened intently to the details of his house-building project, disparaging opinions about his architect and complimentary comments about the plumber. Shouts from the venue audience and from other remote attendees for him to mute himself went unheard: as you know, you can't hear what other people are saying during remote meetings when you yourself are talking.

As for the Zoom host – the only person in the venue with muting rights – well, she was on camera and on stage at the time, some distance away from her laptop and shouting needlessly but instinctively at the projector screen behind her along with everyone else.

I host monthly remote membership and committee meetings for my union branch, and for all the talk about returning to meeting in person now that doing so is deemed safe enough, or even switch to a hybrid format, we still haven't done either.

Hosting remote meetings is too damn convenient. However, contrary to the reluctance elsewhere to return to offices, our old in-person meetings regularly attracted many more people than our Zoomers do.

So what makes a boring in-person meeting worth the physical effort of hauling yourself over, compared with the no-less-boring but ultra-convenient remote meeting you can log into while snacking at home?

Hmm, snacking. That reminds me, have you noticed that co-working spaces are opening up again? Not crappy city centre office-hire units, which are dying fast, but the good old hipster hotdesking, sofa-sprawling, untreated-wood furniture type of co-working space. You know, the ones with free coffee… and snacks. In fact, I keep getting offered 24-hour trial memberships to new co-working sites around the city. If I scheduled the trial days in sequence, I could probably live on the free snacks for a week.

Come to think of it, at our old in-person union meetings, we always arranged a table piled high with potato chips and sandwiches. Obviously we can't do that for our Zoomers. Surely that can't be why the former were more popular, can it? Crisps/chips and sandwiches… really?

The answer came this week as I hauled myself away from my warm desk and stepped out into the cold night to attend a super-dull, strictly in-real-life-only annual general meeting of my local hiking club. A bit of fresh air, I thought. When I arrived, the room was absolutely packed, with well over 50 per cent of the total membership right there in attendance, in person. Even the regional director of the national federation turned up, plus managers from the sports centre and even a mayoral representative from the town hall.

Wow, we could all learn a lesson here about enticing people back into IRL. All other local clubs have been forced to Zoom and Skype their mandatory AGMs due to lack of attendance. But no remote, no hybrid for these guys and the place was heaving. What's up here, I asked?

Alistair Dabbs is a freelance technology tart, juggling tech journalism, training and digital publishing. He would have liked to investigate more into the potential of hybrid meetings but felt a little hungry and went off in search of a real-life meeting instead. More at Autosave is for Wimps and @alidabbs.