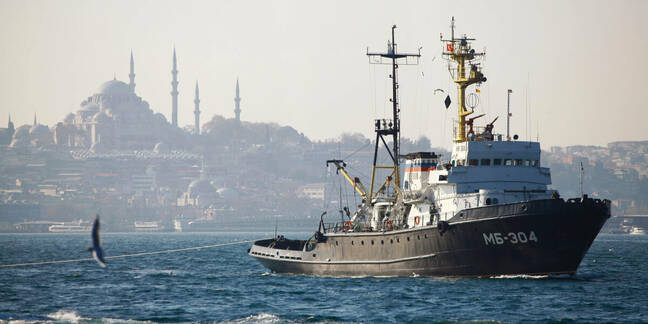 A Russian Navy ship crosses the Bosphorus in November 2021. Ukraine this morning asked Turkey to close the Bosphorus and Dardanelles straits to Russian warships, Kyiv's ambassador to Ankara said. Pic by: Atakan Divitlioglu/Shutterstock

In the eight years since Russia annexed the disputed territory of the Crimea, Ukraine’s IT services industry, which is based around outsourcing and bespoke software development, has grown by 36 per cent from $5bn to $6.8bn in exports, according to a 2021 National Study from local tech association IT Ukraine.

This morning, reports began to flood in stating that Russia had begun bombing military targets.

Earlier this week, ELEKS, a global IT company with offices in 13 countries worldwide, including in Ukraine, told The Register it had already started moving some staff to offices in the west of Ukraine and to offices abroad starting last December.

"For those specialists that have chosen to stay in Ukraine, we have recommended that they move to our delivery centers in the western part of Ukraine. These delivery centers are fitted with backup generators, satellite phones, satellite and dark fiber internet, and other tools to provide business continuity and support for our staff," the company said in a statement earlier this week.

Vitaly Sedler, the president of IT Ukraine Association and CEO of Intellias, a global technology partner, told us: "The Ukrainian IT industry always promptly responds to politically and socially significant events. The IT business is socially responsible and focuses on people, its customers' and partners' interests and aligned with the development of our country.

"We are aware of all possible risks, clearly see them and have operational plans to respond to emergencies. At the same time, we continue to operate in a standard mode and monitor the course of events carefully."

According to a recent survey of association members, 92 per cent assessed the possible escalation of the armed conflict risks in the foreseeable future as low to medium at the time. None of the companies was preparing for a full relocation, the survey found.

Kerry Hallard, CEO of the Global Sourcing Association (GSA) — which represents IT outsourcers — said she had been in touch with members in Ukraine. N-iX, an Eastern European software development service company, told the GSA its offices, including those in Kyiv and Lviv were unaffected. Eastern cities of Donetsk and Luhansk are more likely to be first affected.

"It's not quite business as usual but they have got to continue; these companies have spent years building up their industry," she said.

At the same time, as the market for software deployment booms, there may be few alternatives.

Hallard pointed out that Poland had been heavily recruiting software engineers from Ukraine, as salaries rose 35 per cent. "If you withdraw from Ukraine, it leaves the question of where you’re going to find an alternative," she said.

Kulraj Smagh, CEO of software development company Ciklum, said the company had a "well-defined business continuity plan designed to protect our associates and our ability to perform work for our clients in various scenarios that may disrupt our business."

"In short, our priority continues to be the safety and welfare of our people," he said. ®