Plus another phone, laptop, monitor

On Tuesday at one of Apple's periodic product reveals, the iGiant introduced a low-end iPhone, a mid-tier iPad Air, a 27-inch Studio Display, and a conjoined chip called M1 Ultra that powers a compact desktop workstation dubbed the Mac Studio.

Starting at $429, the latest iPhone SE is affordable by Apple standards but is still rather more than low-end Android devices. It's much like the old iPhone SE, apart from its 12MP ƒ/1.8 aperture Wide camera, which supports computational photography features that Apple makes special with insistent capitalization: Smart HDR 4, Photographic Styles, Deep Fusion, and Portrait mode.

The refreshed iPhone can be had March 18 with 64GB, 128GB, or 256GB of storage, in colors called midnight, starlight, and the somewhat bizarrely named (PRODUCT)RED. Pre-orders begin on March 11.

Apple CEO Tim Cook effused over "two gorgeous new finishes" for the iPhone 13 and 13 Pro: green and alpine green. And that's all that needs to be said about that.

The revised iPad Air, the second-largest screen size in an iPad product line of four, also got a refresh with the addition of an Apple Silicon M1 chip. The fondleslab offers a new Ultra Wide front camera, a USB-C port, and a 5G cellular option.

Starting at $599 for Wi-Fi only and at $749 for Wi-Fi and cellular, the iPad Air is available with either 64GB or 256GB of memory, in colors that include space gray, starlight, pink, purple, and blue. It can be accessorized with a $129 Apple Pencil (2nd generation), a $299 Magic Keyboard, a $179 Smart Keyboard Folio, or a $79 Smart Folio (sans keyboard). And as with the iPhone SE, pre-orders start March 11. Availability is promised for March 18.

The most significant announcement to come out of Apple's "Peek Performance" event is the mega-corp's 5nm-node 20-CPU-core M1 Ultra chip and the device it inhabits, Mac Studio.

M1 Ultra is basically two M1 Max chip dies joined together within the same package using an interconnect technology that Apple neglected to mention when it introduced the M1 Max last year.

It comes amid a growing move by Intel, preceded by AMD, to adopt multiple chiplets within single packages. Apple was noticeably absent from an Intel-led initiative launched this month for a standardized die-to-die bus; guess we now know why.

"M1 Max has a secret, hidden feature we haven't talked about until now," said Johny Srouji, SVP of hardware technologies at Apple. "It has a groundbreaking die-to-die interconnect technology that allows us to scale even further by building M1 Ultra from two M1 Max dies, which doubles performance. And we connect it to die with our innovative custom packaging architecture. This multi-die architecture is way ahead of anything else in the industry. And we call it Ultra Fusion." 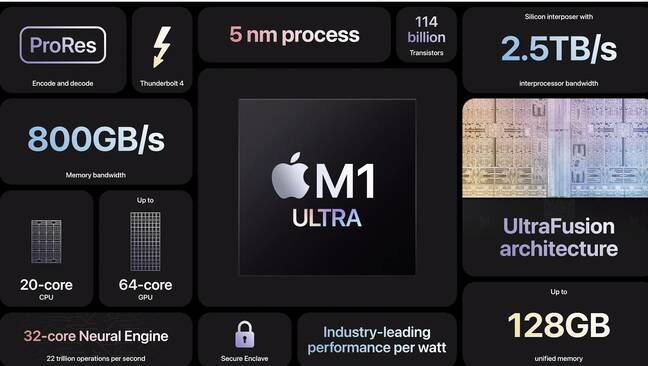 Apple's specs for its M1 Ultra ... Click to enlarge

The Ultra Fusion architecture, Srouji explained, uses a silicon interposer that has twice the connection density of any technology available. It connects over 10,000 signals, he said, and provides 2.5TB per second of low-latency interprocessor bandwidth between the two die using very little power.

"Thanks to the magic of the Ultra Fusion architecture, it behaves like a single chip for software and preserves the benefits of the unified memory," said Srouji.

The M1 Ultra, he said, has 114bn transistors, seven times more than the M1, a 20-core CPU, a 48-core or 64-core GPU, and 32-core Neural Engine. It offers memory bandwidth of 800GB/s and supports up to 128GB of unified memory and 8TB of SSD storage. And according to Srouji, it delivers 90 per cent higher performance than the fastest 16-core PC desktop computer and can match that machine's peak performance while using 100W less power.

Apple has put its twinned chip into a device it called Mac Studio, which is about the size of two Mac minis stacked on top of one another. With a footprint of 7.7x7.7x3.7-inches, it incorporates double-sided blowers for cooling, though we're assured you'll rarely hear them due to the M1 Ultra's power efficiency. 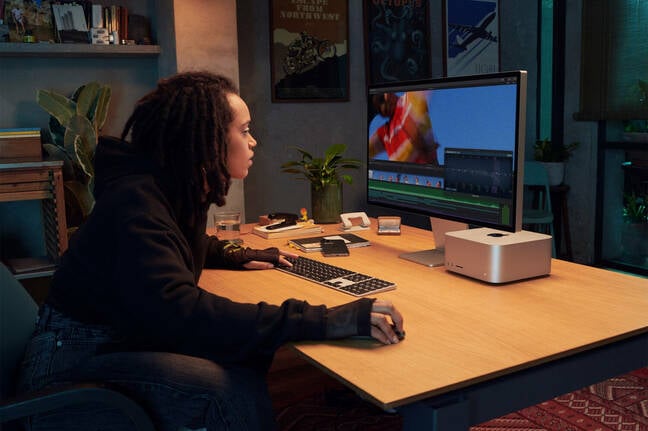 Apple is also introducing a display for its new desktop box, the Studio Display ($1,599 or £1,499), which features a 27" 5K Retina screen. Running its own A13 chip, the Studio Display has three USB-C ports and a Thunderbolt port that can deliver 96W for notebook charging. It includes a built-in 12MP Ultra Wide camera, three mic-array, and speakers that support spatial audio.

"It's the most powerful and capable chip ever for a personal computer," said Srouji. ®