Gee, could this be something Intel or IBM actually lead?

Neuromorphic chips that mimic the way brains work may have broad applicability for high-performance computing applications and could be a better fit than CPUs and GPUs in some cases, according to Sandia National Laboratories in the US.

Neuromorphic computing represents a fundamental change in the way data is processed and analyzed. Up until now, artificial intelligence has been promoted as the main use case, although IBM, which was far ahead of the commercially viable brain-inspired game with its True North devices once saw much broader applicability.

Intel, for instance, positions its Loihi neurochips as the future of AI computing but as Sandia researchers demonstrated in a recent article in the peer-reviewed journal Nature Electronics, Intel's Loihi chips "can solve more complex problems than those posed by artificial intelligence and may even earn a place in high-performance computing." This includes problems like tracking X-rays passing through bone and soft tissue, data flows within social networks, financial market movements and disease spread within a population, among other things.

This could be a big deal because neuromorphic computers can expend less energy and solve problems faster than traditional computers in best-case scenarios, according to the researchers.

That has potential implications for the architecture of future HPC systems, which have traditionally relied on CPUs but are increasingly reliant on power-hungry GPUs for heavy-duty processing. In one graph, the Sandia researchers showed that neurochips made by Intel and IBM were much more energy efficient than single- and multi-core CPUs as well as GPUs. 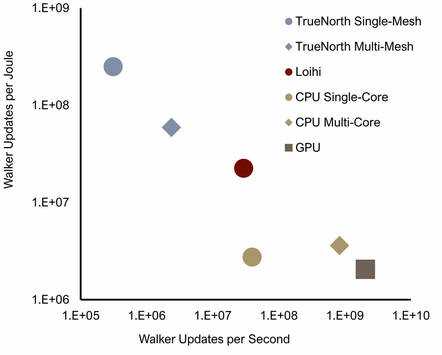 A graph from Sandia National Laboratories showing the energy efficiency benefits of neurochips ... Click to enlarge

"These problems aren't really well-suited for GPUs which is what future exascale systems are likely going to rely on," Aimone said. "What's exciting is that no one really has looked at neuromorphic computing for these types of applications before."

This means Intel and IBM's neurochip efforts could eventually have bigger payoffs in the future than they previously anticipated.

Key to the efficiency capabilities of neuromorphic chips is the way their pin-like structures replicate neurons in a brain, the researchers said. These pins only consume electricity, which comes from nearby sensors, when they contribute data. That's in contrast to traditional processors, where energy is used regardless of whether all the circuits are processing information.

Another benefit of neuromorphic chips: the computing and memory components exist in the same structure, which reduces energy consumption when data travels between the two, they said.

The irregular flashing of artificial neurons in neuromorphic chips may actually transmit data slower than the circuits in traditional computer chips, but they gain an advantage when scaled to larger numbers, which is the direction neuromorphic computing is headed. Intel, for instance, has increased the number of neurons from 128,000 to 1 million with its next-generation Loihi chip.

The Sandia researchers don't expect neuromorphic computing to dominate the future of HPC as it can be costly to move data on or off the brain-like chips when data sets get larger. But workarounds can be made — for instance, choosing to process and output summary statistics rather than raw data — and neuromorphic chips can be attractive because of their speed and low energy costs.

"Perhaps it makes sense that a technology like Loihi may find its way into a future high-performance computing platform," Aimone said. "This could help make HPC much more energy efficient, climate-friendly and just all around more affordable." ®