With more than $100m in software revenue last year, this is a natural next step.

During Intel's investor meeting last month, the semiconductor giant, which has ambitions similar to Nvidia's in software, revealed for the first time how much it's made from slinging code. Greg Lavender, the head of Intel's new software group, told shareholders software is a "great opportunity," and that he expects to grow the business to $150m this year.

Of course, this figure is a pittance compared to the chipmaker's roughly $70bn in annual revenue, most of which comes from silicon, but remember Gelsinger's software business pedigree as former VMware CEO during that virtualization titan's boom.

"It's not much at that level for a company our size," Gelsinger said at the February 17 meeting, commenting on his "software-first" approach. "We're going to grow it rapidly, but we're going to pull through platform differentiation, which is going to [have a] very disproportional business benefit, even though the near-term revenues are rather small."

Intel's paid software efforts span across its business units, including the PC-oriented Client Computing Group, the Datacenter and AI Group, and the Network and Edge Group. Its stable of offerings today represent a mix of homegrown products and those gained through acquisition.

Gelsinger said this strategy – like Nvidia's – will allow Intel to collect recurring revenue on top of the money it receives from one-off sales of silicon such as microprocessors and other components. "We're going to begin layering in differentiated software that pulls through our platform value and creates SaaS service revenue on top of it," he said.

An example of how this software revenue puzzle fits together is the recently acquired Israeli startup Screenovate, whose technology will debut in select Intel Evo laptops by the end of the year. The startup has developed screen duplication technology – demonstrated below – that supports interaction between different devices with different operating systems. This will enable, for instance, users to easily set up a tablet as a second screen for a laptop or access the functions of a smartphone or wearable on a PC.

Gelsinger said Screenovate is all about "driving the ecosystem experience for the PC," and that Intel will monetize the technology – though The Register suspects computer makers and not end users will likely foot the bill.

Another example is with a recent Intel acquisition called RemoteMyApp. The Poland-based startup enables businesses to provide cloud gaming services. During Intel's investor meeting, Gelsinger said the company will use the technology for a cloud gaming service code-named Project Endgame, which will arrive later this year and make use of Intel's upcoming Arc discrete GPUs.

Responsible for the execution of Intel's SaaS and software strategy is Lavender, who was Gelsinger's former CTO at VMware and was hired last year to serve as the chipmaker's CTO and lead the newly configured Software and Advanced Technology Group.

In a statement that will likely make small and medium businesses a little jealous — OK, maybe a lot — Lavender said Intel built its $100m software business "without us really trying to sell it."

During his breakout session, Lavender said Intel's new SaaS and platform products represent "market-making technologies" that are built on top of the chipmaker's frameworks, tools and libraries — which includes Intel's oneAPI toolkits —  as well as the BIOS, firmware, operating system and virtualization technologies that serve as the foundation of the company's software efforts. 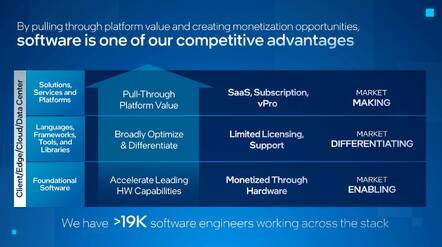 Intel's software strategy, explained in one slide from the chipmaker ... Click to enlarge

Intel's paid software efforts also include artificial intelligence products from Cnvrg.io and SigOpt, two software startups the company acquired prior to Gelsinger joining Intel as CEO in 2021. Cnvrg.io is a managed AI service that aims to make it easy to run and move workloads across cloud instances, on-prem servers and edge gateways while SigOpt provides optimization software for large AI models.

Those two businesses, combined with Intel's homegrown OpenVINO software for deep learning inference, represent key products that "drive much larger valued, market-making capabilities that enable customers, partners, [independent software vendors] and Intel itself to monetize that level of the stack," according to Lavender.

Lavender displayed these and other solutions at the top of Intel's software stack in a diagram during his presentation, but he said Intel has "significantly more technology" than what was shown. 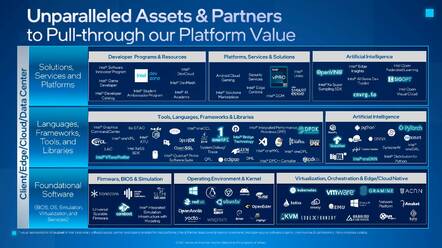 Lavender said Intel will continue to build new paid software offerings through internal development and through acquisitions in the future.

"We intend to continue to invest and grow our offerings in this SaaS subscription service level and the platform layer both organically and in organically," he said. ®