Astrolab up against competition but has secret weapon: Cosmic crooner Chris Hadfield

Space startup Astrolab, led by ex-SpaceX manager and NASA engineer Jaret Matthews, has successfully tested a lunar rover prototype that can operate telerobotically or ferry around a crew of two astronauts.

A full-scale prototype was lately tested in the California desert near Death Valley. The five-day field test (which included the participation of retired astronaut and orbital artiste Chris Hadfield) demonstrated both the rover's ability to carry large payloads and cope with challenging terrain. 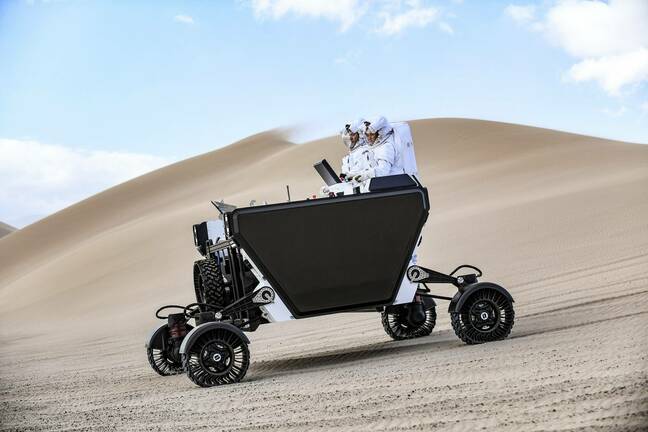 Hadfield, also an Astrolab advisory board member, was unsurprisingly upbeat about the vehicle: "It was not only a joy to drive FLEX but also see its size, capability, and get an intuitive sense of what this rover can do."

The Flexible Logistics and Exploration (FLEX) rover joins other proposals from the likes of Northrop Grumman and Lockheed Martin.

The final build of FLEX will feature a steerable high-gain antenna to maintain high-bandwidth communication with Earth and three square metres of solar arrays (which can be stowed "during highly dynamic operations") to keep the batteries topped up. As well the potential to carry a pair of astronauts, the trundlebot can lug three cubic metres of payload slung beneath it (weighing in at 1,000kg).

Performance-wise, an Astrolab spokesperson told The Register this week: "The nominal speed of FLEX is 15kph but we hope to push this a bit and set a new lunar speed record at just over the 18kph that Eugene Cernan did in 1972.

"We anticipate astronauts being able to cover 60+km during a typical EVA, or extravehicular activity, at lower speeds this range will be extended considerably."

It is approaching half a century since a lunar rover last turned its wheels on the Moon, and NASA is looking for something from commercial industry to support its Artemis program. "As we plan for long-term exploration of the Moon, the LTV won't be your grandfather's Moon Buggy used during the Apollo missions," said project manager Nathan Howard.

The expectation is that the unenclosed rover will need to last at least 10 years and support multiple Artemis missions.

With actual wheels rolling over the Californian desert sands, Astrolab appears quite some way along in terms of lunar rover development. It has teamed up with electric vehicle specialist Venturi for batteries and materials able to withstand the harsh lunar environment and appears to be following the rapid, iterative development approach of companies such as SpaceX.

However, the FLEX rover (if selected by the US space agency) might be in for a bit of wait for a ride as part of NASA's Moon program. The LTV is due to arrive on the Moon's surface as part of the Artemis V mission (perhaps in 2027, perhaps a bit later.)

The Register asked Astrolab when it reckoned the FLEX rover might rumble over the regolith and were told by a spokesperson: "We plan to send FLEX to the Moon at the first possible opportunity. FLEX can enhance Artemis missions by deploying infrastructure and conducting exploration and science in advance of astronaut arrival.

"FLEX is sized to fit on both HLS class landers, such as SpaceX’s Starship, and also several of the landers under development in the Commercial Lunar Payload Services (CLPS) program." ®

If we're going to go beyond the Moon, we'll need food, a way to build stuff, and health diagnostic technology
Science28 Nov 2022 | 14