We sent it off 'to tweak a dragon's tail, and it did that and more'

Feature We might be nearing the 50th anniversary of the last Apollo Moon landing, but spare a thought for NASA's Pioneer missions. Pioneer 10, the first mission to the outer planets, was launched 50 years ago this month.

It is difficult to grasp the sheer number of unknowns facing scientists and engineers with the Pioneer 10 and 11 spacecraft. Earlier Pioneer probes had been launched to study the Moon and space weather, but with twin spacecraft 10 and 11, scientists would be venturing outwards, past the asteroid belt and past Jupiter. 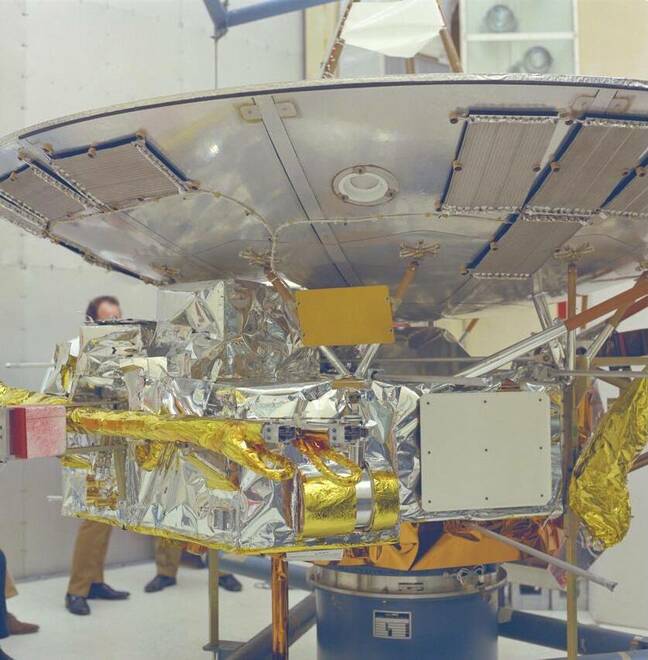 The Pioneer 10 before launch. Pioneer 10 sent its last signal to Earth in 2003. According to NASA, it's currently on a path to interstellar space, heading "generally" for the red star Aldebaran, 68 light years away, and it will "take Pioneer more than 2 million years to reach it."

The missions were a precursor to the famous Grand Tour of the Voyager probes. The Pioneer spacecraft would be used to assess possible hazards in the asteroid belt and the environment around Jupiter (Pioneer 11 would go on to perform a Saturn flyby) as well as gathering as much data as possible.

Could it get through the asteroid belt? ... Would it be like trying to walk across Oxford Street in rush hour and having to dodge all the cars – or what?

In addition to being the first spacecraft placed on an escape trajectory and the first to fly past Mars and Jupiter, Pioneer 10 was also the first to use all-nuclear electrical power from a pair of SNAP-19 radioisotope thermal generators (RTGs). If all went well, it would be too far from the Sun to use solar power.

"Pioneer and Voyager were both launched," recalled Dr Garry Hunt, a member of the Voyager imaging team, "before anybody thought 'Hang on guys, what happens if these spacecraft keel over and crash into Florida?'"

They didn't, although protests around the launching of RTG-powered spacecraft would become commonplace (for example, the protests over plutonium on board Galileo and Cassini).

Pioneer 10, however, launched atop a three-stage version of the Atlas Centaur on 3 March at 0149 UTC without a great deal of drama.

"The spacecraft was really quite simple," explained Hunt, "The key thing was – could it get through the asteroid belt? We had no idea how difficult it would be or how easy it would be.

"Would it be like trying to walk across Oxford Street in rush hour and having to dodge all the cars – or what?"

Indeed. One spec of space dust striking a probe could easily disable it. And then there was Jupiter: "We knew by this time that Jupiter had a large magnetic field, but we (the space community) weren't sure what it was like close up."

So, armed with 11 instruments, Pioneer 10 launched 50 years ago this month with a long list of unknowns to tick off. Four months after launch it encountered the asteroid belt, and the good news? It sailed through.

Some strikes were recorded although, according to NASA, "fewer than expected." It emerged from the belt in February 1973, the same year it would make its closest approach to Jupiter at just 82,000 miles (131,966km)(considerably closer than the one the Voyagers would make a few years later).

A decrease in the solar wind and a 100-fold increase in temperature indicated that Pioneer 10 had entered Jupiter's magnetosphere. The closest approach occurred on 3 December 1973. The spacecraft snapped images of the planet (only blue and red colours were available, which were combined to produce a synthetic green image for the full three colours) and more than 500 were transmitted back to Earth. The Pioneer program would later receive an EMMY award for its real-time display and release of images of Jupiter to the media.

As Robert Kraemer, NASA's director of Planetary Programs, put it at the time: "We can say that we sent Pioneer 10 off to tweak a dragon's tail, and it did that and more. It gave it a really good yank and ... it [Pioneer 10] managed to survive."

Indeed it did. Engineers and scientists watched as detectors on the spacecraft climbed toward their limits; according to a NASA history paper on the subject "One of the investigators used up 99 percent of the range on his instrument to obtain data despite the radiation, but the instrument made it through the encounter with just the remaining one percent to spare." Pioneer 10 survived with only minor glitches.

Kraemer said at the time again: "It is very hard to see how it [Pioneer 10] could have done its job any better. All elements went beyond the project teams' expectations getting off to a good launch a couple of years ago, tracking the spacecraft, getting all the data back, has been just a beautiful effort."

The Voyager team realised that their own instruments need protection – sure, Pioneer 10 had made it through the asteroid belt, but it had still registered some hits; was this luck or was this normal? The sophisticated electronics would also need protection as more was learned about the environment around Jupiter. It would all stand the Voyagers in good stead for their extended missions to Saturn and beyond. In comparison, Pioneer 10's mission was, as Hunt put it, "Jupiter or nothing... and it did it..."

Pioneer 10 had no further encounters. It passed Saturn's orbit in February 1976, recording that Jupiter's enormous magnetic tail covered the distance between the two planets and crossed the orbit of Neptune in 1983. NASA kept in routine contact with the probe until 31 March 1997, when budget cuts meant that only intermittent communication occurred.

Still, the spacecraft's instruments continued functioning, and threw up an interesting puzzle: the "Pioneer anomaly" where both Pioneers were noted as travelling ever so slightly slower than expected, a phenomenon put down to the emissions from the RTGs (although analysis continued long after the data stopped being received).

In 1998, Pioneer lost its "farthest human-made object" crown to Voyager 1 and the last telemetry data was received on 27 April 2002. Less than a year later, on 23 January 2003, the final signal was picked up from the spacecraft. After this time, engineers reckoned that the RTG power source could no longer drive the radio transmitter. A final attempt to contact Pioneer 10 occurred on 4 March 2006.

No longer in communication, Pioneer 10 sails on. "So Pioneer actually did open our minds," said Hunt, "A very, very important mission. It's possibly the first spacecraft to leave the solar system*; I say 'possibly' because we lost contact in 2003. Voyager, we have been able to track all the way through, but the first one could have been Pioneer 10.