One screen sits above the keyboard, another is where you'd expect to find it. And we think you'll find a use for both

Desktop Tourism PCs and alternative devices have increasingly diversified into myriad and marvelous forms, so I've decided that in 2022 I'll use a different one each month and share the experience.

I think of it as "desktop tourism". It's easy to take a regular trip because my browser-centric world is marvellously portable. It takes less than an hour to personalise a machine with almost everything that matters to me – my browser of choice, access to cloud storage, a desktop hypervisor, a few macros – so changing machines won't disrupt my productivity.

My baseline is that any device I test must include Wi-Fi, Bluetooth and USB-C. On-board HDMI and USB-A are preferred, but failing that I have a USB-C dongle. I'm not wedded to an operating system, but for over a decade I have used a particular Logitech keyboard that relies on the firm's proprietary USB-A wireless widget. If that widget doesn't work, I'm in a world of pain.

My plan is to test some mainstream boxes from big names, some devices that show off new desktop directions, plus some rarities or oddities. I'll assess overall usability and perceived performance, rather than running benchmarks – because direct comparisons will be hard to achieve across the diverse devices on my wish list.

The second screen is surprisingly handy. ASUS suggests it will be most appreciated by folks who work with specialist toolbars used in graphics apps, games, or software development tools. 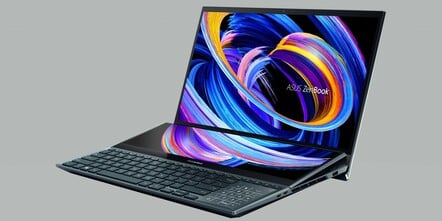 I found it most useful when participating in video conferences, because I could put Zoom or Teams on the small screen and see enough of the action. I then used the main screen for whatever document I needed during the event. This arrangement meant my eyes were focussed up towards the laptop's webcam, so I was making decent eye contact even though I was taking notes, reading slides, or doing whatever else the occasion demanded.

Through the rest of the day the second screen housed apps I pop in and out – image editors, music streamers and the like. The screen was somehow a better way to access those apps than dragging them out from beneath a stack of other windows, or an ALT-TAB frenzy.

While not cleverly context-sensitive like the Touch Bar Apple places atop the keyboard on some MacBooks and which displays oft-used function keys, I found that when I needed the second screen I was happy to spend a little time to create the context I needed. For video conferences I'd prepare by dragging windows into useful positions. When editing slideware, I'd shove toolboxes where they were persistently accessible, but not intrusive.

I tried the small display as a home for the Twitter window I use to keep a stream of possible news leads drifting past my peripheral vision – but it was too small to make enough of Twitter legible.

This is a desktop replacement – not a machine for nomads

Aside from size, though, the second screen is no poor cousin – it displays colour and handles touch input as well as the main display. I think that almost anyone who uses the Zenbook Duo will find a use for it and be glad of its presence.

But I don't think the screen is a reason to rush out and buy the machine, which at around $3,000 competes with plenty of other laptops that straddle the line between a portable workstation, a desktop replacement, and a gaming machine.

It quickly grew too hot to use comfortably on my lap. Brushing the machine's chassis to do things like connect a USB device had me pulling away in worry that a longer touch could find dangerous heat that could singe, or worse. So much heat radiated from the machine that it felt prudent not to leave it running overnight.

After a day or two I felt reassured. The machine was warmer than most, but it did not deliver on its threat of danger.

By then I'd hefted it a few times, walked 2km with it in a messenger bag, and concluded that this is a desktop replacement – not a machine for nomads.

The keyboard is pleasingly large and responsive but is positioned off-center on the left edge of the machine. To its right is a touchpad that, when prodded in the right spot, reveals illuminated numerals and becomes a numeric keypad. I found I needed to learn a new physical vocabulary to use the machine – a chore no other laptop has ever asked of me and which was therefore challenging and unwelcome.

The second screen probably contributes to modest battery life – three hours and forty five minutes in my tests of how much everyday work I could get done before power expired. The machine also slowed notably when running on battery.

There's an Intel Core i9 10980HK under the hood – a 14nm, eight-core Comet Lake bruiser that can work at between 2.4Ghz and 5.3Ghz. That's a CPU built for speed, not comfort (as my too-warm lap can attest), but even when throttled to preserve power the machine was never laggy or frustrating. An Nvidia GeForce RTX 3070 GPU drives the dual displays and did not break a sweat, even when also handling an external 28-inch monitor over HDMI.

The PC had no trouble handling my daily workload – typically simultaneous use of about 30 Chrome tabs, Spotify, MS Word, Slack, GIMP, and at lunchtime some embarrassingly retro 32-bit games. When I gave the machine something a tad tedious to do – converting a five-minute 4K video to 1080P using Handbrake – it got the job done in 4:20. The same job in an Ubuntu VM under VMware Workstation required 7:54 to finish the job while I kept working in the Windows 10 host.

The machine disappoints right out of the box because it is accompanied by a large and unwieldy power brick that uses an L-shaped barrel connector which gets in the way of the sole HDMI socket until twisted to a certain position. A pair of USB-C sockets tease as power-capable by each including Thunderbolt's energetic little logo – but they can't power the machine. So forget about the modern convenience of placing a USB-C power supply wherever you might find yourself working. Solitary USB-A and 3.5mm audio sockets complete the I/O options.

I liked this laptop. The dual screen design is well executed, the machine is speedy, easy on the eye in all regards, has pleasing speakers, and demonstrates design ingenuity.

But because this is one of so few dual-screen laptops it is hard to know if it represents the best of the breed. It's also challenging to make an outright recommendation as it's not clear who needs the extra screen, and for what. If you're able to spend some time with the laptop before purchasing, preferably using an application that really matters to you, please do so – that will let you understand if the novelty of the second screen is worthy of investment.

If test time isn't an option and you take the plunge anyway, I'm confident you'll still come into possession of a very solid machine capable of handling all manner of demanding workloads – but may also find yourself irritated by an unusual keyboard, limited I/O options, and a heavy and hot laptop that doesn't travel well. ®