The OVHcloud datacenter in Strasbourg, France, that was destroyed in a fire last year had no automatic fire extinguisher system nor an electrical cutoff mechanism, according to a report from the Bas-Rhin fire service.

The incident report was obtained and published by Journal du Net (JDN), a French-language IT site. It describes several issues that contributed to the destructiveness of the blaze, including the presence of toxic fumes from lead batteries, a wooden ceiling rated to resist fire for only an hour, and two inner courtyards that acted as "fire chimneys."

The fire occurred at 0046 on March 10, 2021 and destroyed SBG2, a five-story datacenter occupying 500m2. Servers in adjacent buildings SBG1 were also damaged in the incident while SBG3 and SBG4 remained operational.

"We have a major incident on SBG2," said OVH founder and chairman Octave Klaba via Twitter at the time. "The fire declared in the building. Firefighters were immediately on the scene but could not control the fire in SBG2. The whole site has been isolated which impacts all services in SGB1-4. We recommend to activate your Disaster Recovery Plan."

OVHcloud operates 15 datacenters in Europe, with four in Strasbourg and a fifth being built. 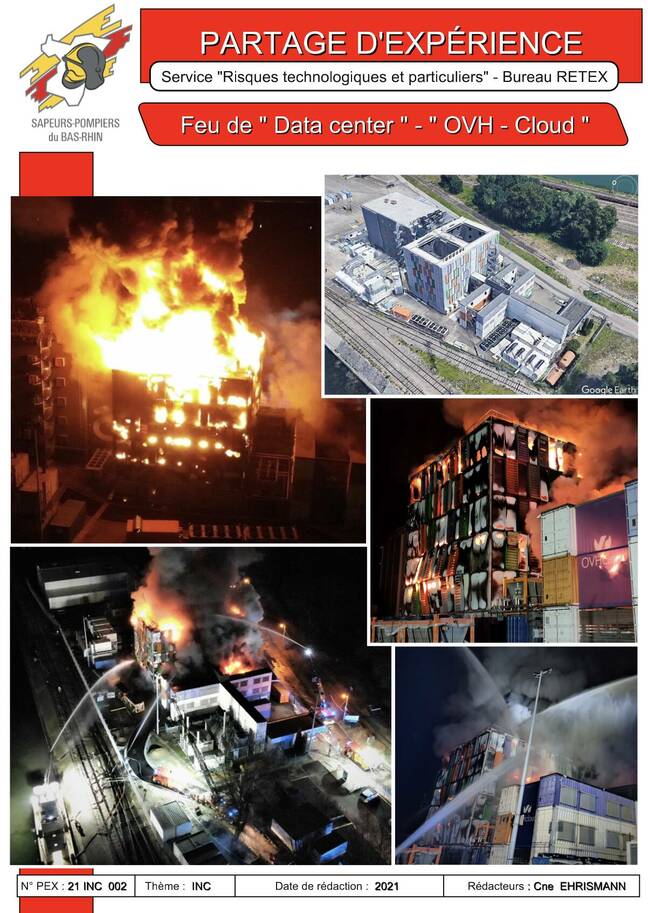 The Bas-Rhin report describes an electrical inverter fire that began on the first floor of the five-floor SBG2 structure. The cause of the fire has not been officially declared by OVHcloud and the company did not immediately respond to a request for comment.

JDN describes how arriving firefighters were met with "electric arcs of more than one meter around the exterior door of the energy room" where the fire is believed to have originated. The report, as algorithmically translated says, "The technicians of ES (Electricité de Strasbourg) met difficulties in cutting off the electricity in the room." ES personnel arrived on-scene about 0120 and didn't manage to cut the power until about 0329.

The report describes the firefighter group leader stating that the temperature in the ground floor room measured 400 degrees Celsius using a thermal camera.

Over 140 customers have filed a class action lawsuit against the company seeking damages for losses arising from the fire. According to the law firm handling the complaint, Ziegler & Associates, numerous French government websites were affected by the fire, including data.gouv.fr, the National Education website, the Center Pompidou website and Meteosky. The law firm claims many customers lost their data as a result of the fire and did not understand the need to pay for additional backups. ®

Residents in westernmost municipality of Solund praise new mobile coverage, but others have been left behind
Networks1 Dec 2022 | 60