A robotic system armed with AI-powered cameras can grow and image skin cells from test tubes to diagnose Parkinson's disease with minimal human help, according to researchers from Google and the New York Stem Cell Foundation.

Parkinson's disease is estimated to affect 2 to 3 percent of the population over the age of 65. Nerve cells located deep within the basal ganglia region of the brain slowly die over time, impacting motion. Patients find it difficult to control their movements; their limbs may shake or feel stiff. Scientists aren't sure what causes the disease, and it is currently incurable.

The non-profit research institute developed a robotic system capable of performing lab experiments in a controlled environment. Known as the Global Stem Cell Array, the robotic system is made up of a series of machines with robotic arms capable of manipulating test tube samples for cell culture.

Fibroblast cells are extracted and grown from skin cells – the process takes about four weeks. Engineers at Google Research pushed the system one step further by installing AI software trained to diagnose Parkinson's disease from skin cells with 79 percent accuracy, according to a research paper published on Friday in Nature Communications.

"This was a new avenue of research in which we wanted to see if we could identify a signature in patient fibroblasts using artificial intelligence," he explained. "Other groups have previously described alterations in the behavior of fibroblasts grown from Parkinson's patients, specifically dysfunction in mitochondria and other organelles, though these have largely been small studies."

First, cells obtained from patient skin biopsies are grown in test tubes. Next, these samples are stained and placed under a fluorescent microscope. Cameras snap images of the cells and feed them into a convolutional neural network to study. The model is trained to home in on individual cells and determine whether or not they belong to a patient with Parkinson's disease and the robots can run 24/7 without human assistance.

Skin cell biopsies obtained from 91 participants were used to train and test the system. The AI-powered Global Stem Cell Array was able to diagnose the disease with 79 per cent accuracy. It was able to trace cells to individual patients, even when new samples collected years after the first biopsy were analysed. 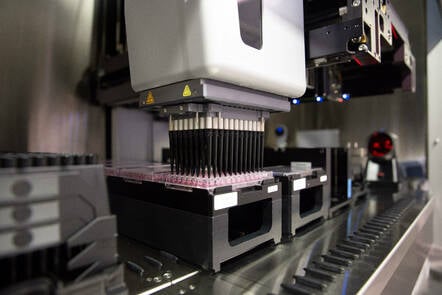 Solomon said the project was a proof of concept that showed Parkinson's disease could be diagnosed by looking at skin samples from patients. The technology – using a robotic system armed with AI software to culture cells – could also potentially aid scientists in drug discovery. "You could apply drugs to the diseased cells and, using the AI, see if you can find drugs that make the diseased cells look like the cells from healthy individuals," she told us.

It's difficult to tell a diseased skin cell apart from a healthy one – something humans can't do with their own eyes. The machine learning algorithm had to analyse over 1,200 features. "Our analysis indicates that the detected [Parkinson's disease-specific] morphological signatures are extremely complex, much like its clinical manifestation, and comprehensive disruption studies will be required to delineate the underlying molecular mechanisms," the paper explains.

Combining the robotic lab worker with AI algorithms will allow researchers to study a wide range of diseases more thoroughly, said Paull. "This is the first tool to successfully identify disease features with this much precision and sensitivity. Its power for identifying patient subgroups has important implications for precision medicine and drug development across many intractable diseases."

Solomon said the NYSCF is planning to keep developing the technology so it can be used in therapeutic or diagnostic applications in clinical settings. "We are continuing to improve on our abilities to accurately stratify diseased patients from controls. We are now advancing this approach in other disease areas from very common diseases like aging to extremely rare conditions," she told The Reg. ®