Meta's plans to build hyperscale DC in Netherlands on hold

Plus: It's looking for more Metaverse engineers in Canada

Meta's plans to build a 166-hectare 200MW datacenter in the Netherlands' central Flevoland province have been put on hold. 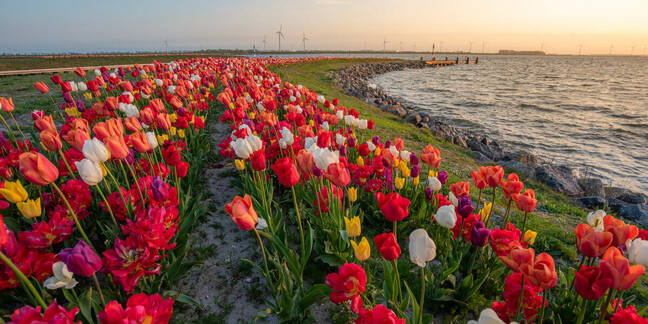 An island full of tulips in Zeewolde, Flevoland

Last week, the Dutch Senate voted to make it impossible to implement the zoning plan for the land – understood to be reclaimed agricultural land – meant to be used for the DC until it can be sure the application by the Facebook parent is consistent with the so-called "National Environmental Vision," on the basis of conflict with the public interest.

A local council in the Flevoland town of Zeewolde signed off on the hyperscale datacenter in 2019, but opposition has built up since and had become a campaign issue in the region. Despite having about half of its land under agricultural use, the Netherlands is one of the most densely populated countries in Europe, and residents pay close attention to land use. The project, which was to be sited on "Tractor Field 4" in the outskirts of Zeewolde, was reportedly code-named "Operation Tulip" amongst Facebook insiders, a Buzzfeed report earlier this year uncovered.

But the town elected a new council just a fortnight ago – on 16 March – under the party name Leefbaar Zeewolde (Livable Zeewolde), and the authority quickly sent a letter [PDF, in Dutch] to the Senate last week with an urgent request to stall the zoning process for land Meta planned to use.

Last month, The Hague placed a nine-month moratorium on the building of large datacenters while new planning regulations are worked out.

For its part, Meta told newswire Bloomberg that it had been "invited" by national, local, and provincial reps to consider the build.

It added in an emailed statement: "We strongly believe in being good neighbors, so from day one of this journey we stressed a good fit between our project and the community is foremost among the criteria we consider when initiating and continuing our development processes... Given the current circumstances, we have decided to pause our development efforts in Zeewolde."

According to the Senate website, the municipality is still discussing the legal requirements for the sale of the land – which is owned by the central government – for the datacenter. These include energy consumption, energy recovery, and a number of environmental requirements.

Engineering jobs – for the Metaverse

Meta also announced a new engineering hub in Canada this week, claiming it had "plans to create up to 2,500 new jobs over the next several years, with recruitment already under way."

The majority of roles are engineering focused and expected to span across building extended reality experiences and Meta technologies. It's also giving half a million dollars to 17 Canadian research labs for what it called "innovations" in the Metaverse."

It unveiled plans to hire 10,000 in the EU last year for the same reason.

Meta already has three European datacenters. The first, established in 2013 in Luleå, Sweden, is a 27,000 square meter DC powered by a hydroelectric dam. The other two are in Odense, Denmark, and Clonee in County Meath, Ireland.

According to a post late last year by Meta's VP of Infrastructure, Tom Furlong, the company had "48 active buildings and another 47 buildings under construction" in November 2021. According to Meta's own public records, the company has 20 DC campuses covering over 3.9 million square meters.

Some might view the construction of this particular DC in the Netherlands as a way of dealing with the increasingly thorny issue of data sovereignty, meaning the information on Facebook's European visitors would be kept in Europe. However, with the US seemingly supporting stateside storage of EU citizens' data, Meta might be less worried about pumping the brakes.

According to a White House statement last week, when data flows from the EU to the US, the Trans-Atlantic Data Privacy Framework will ensure that "signals intelligence collection may be undertaken only where necessary to advance legitimate national security objectives." So that's OK then.