Wing launches drone deliveries in the US where people actually live

Everything's bigger in Texas, even the flying package-slinging robots

Wing will this Thursday launch a commercial drone delivery service in a major US metropolitan area, a first for the Alphabet-owned startup.

The company was spun out of X, Google's moonshot lab, in 2018 to build and operate a drone-delivery business. Since then, Wing has set up operations in Helsinki, Finland, and Canberra, Australia to bring shoppers all sorts of items, from biscuits to burgers, to their doors. It also operates in the US in Christiansburg, Virginia, and is expanding to its first urban area within the country this week: the Dallas-Fort Worth metroplex. 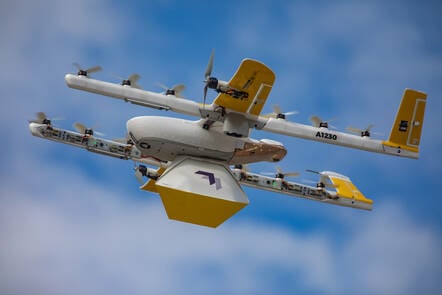 "We're going to be starting small in the Dallas-Fort Worth Metroplex, with service to tens of thousands of suburban homes in the City of Frisco and Town of Little Elm," the upstart announced on Monday.

Over the next few months, residents in certain neighborhoods within those areas will be invited to start placing deliveries via Wing's smartphone app. "Not everyone who lives within range of our drones will be able to order on Day 1. We're going to invite customers in groups to make sure everyone has a good first experience with drone delivery," the biz confirmed.

People living in the Dallas-Fort Worth Metroplex region will eventually be able to order products from Walgreens, ice cream from Blue Bell Creameries, pet medications from easyvet, and first-aid kits from Texas Health.

Wing's drones each have a metre-long wingspan, weigh 5.2kg, and are powered by rechargeable electric batteries. Each device also carries black and white cameras. They're capable of flying at speeds up to 29 metres per second at a height of 45 metres away from airports, and can complete round trips up to 12 miles, carrying goods weighing up to 1.2kg.

When an order is placed, human operators plan and coordinate a drone's flight. After a few minutes it arrives at its target destination, and the product is lowered onto the ground for buyers to collect. The delivery service is only available during daylight hours, and if the weather is clear. At its peak, Wing said it completed 1,000 deliveries a day and has flown over 200,000 times as of last month.

You can see it in action in a video below. ®

Free Forever, or Free Until We Decide It Isn't policy criticised in filing
Legal8 Aug 2022 | 41