IBM has lifted the covers off the z16, the newest member of its Z Series mainframe family, which focuses on the financial services industry with a processor that has built-in AI acceleration for real-time fraud detection.

The z16, generally available from May 31, is the successor to the z15 that launched in 2019, and Big Blue will be hoping that it can replicate the success of that system, which was adopted by many banks. A new mainframe typically delivers a spike in revenue to IBM because plenty of such customers rely on them as a mission-critical part of their business and are keen to upgrade.

For the z16, the new capabilities come in the shape of the 7nm Telum processor, which adds on-chip AI inference capabilities that IBM claims can be used to run real-time fraud detection checks against a transaction while that transaction is taking place.

IBM dropped hints about its new mainframe during the firm's Q4 2021 earnings call in January, and our sister publication The Next Platform was given a full technical briefing of the features in the Telum z16 processor last year.

It appears that the Telum chip contains eight processor cores that run at "more than 5GHz clock frequency." The Z15 ran at 5.2GHz and had 10 cores, and IBM is putting two eight-core chips into a single socket with the z16 processor, linked by a proprietary interconnect.

According to Big Blue, fraud detection models are usually only run on less than 10 percent of high-volume transactions because of the performance issues in running deep-learning models at scale. This means that potentially many instances of fraud are going undetected. 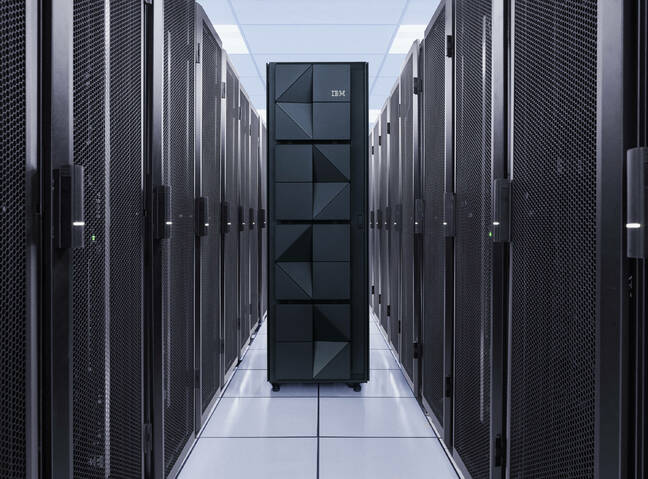 In contrast, IBM claims that the z16 can process 300 billion inference requests per day with one millisecond of latency, with the disclaimer that this figure is based on results extrapolated from IBM's own internal tests running local inference operations using a synthetic credit card fraud detection model.

Nevertheless, Gartner analyst Mike Chuba, managing vice president of the infrastructure and operations group, said this will likely prove a valuable capability for those in the banking industry.

"The value of fraud detection at the point of the transaction is something that IBM started messaging with the Z14 and this AI accelerator strengthens that capability," he said. "When you consider that 85-90 percent of the world's credit card transactions probably touch a mainframe, you can see the value this could deliver."

It could deliver a reduction in revenue loss both for merchants and card issuers, IBM said, as well as cutting down on consumer frustration at having to deal with fraudulent transactions on their credit card.

The new AI capabilities of the z16 could find applications in other areas, according to Big Blue, which cited examples such as speeding up loan approvals, and determining which trades or transactions may have a high-risk exposure before settlement.

"IBM has done a pretty good job of building out other AI-accelerator use cases for business applications in other verticals, such as insurance, healthcare, algorithmic trading, etc," said Chuba. "It can also be used within the z16 environment to anticipate possible outages or optimize operations. So it is a pretty neat addition to the mainframe architecture."

Meanwhile, IBM also asserts that the z16 is the industry's first quantum-safe system. This implies the computer has mitigations against the threat posed by quantum computers, which may in future be able to crack today's encryption algorithms used to secure sensitive information.

In this case, the mitigations are underpinned by lattice-based cryptography [PDF], which was previously touted by researchers at places such as NIST as a technology that may be resistant to quantum-based attacks.

IBM claims the z16 with the new Crypto Express 8S adapter card provides quantum-safe APIs and access to quantum-safe algorithms which were selected as finalists during the PQC standardization process conducted by NIST.

However, this assertion also comes with a disclaimer since it is impossible to know what might happen with quantum computers in future. While many experts believe that truly useful quantum computers may be a decade away, miscreants may be intercepting and storing data now that might still prove damaging if it could be decrypted by a quantum computer in five or 10 years.

"Who knows what the realm of the possible will be over the next 10-25-50 years?" said Chuba. However, he said IBM deserves kudos for trying to tackle this problem for its customers now.

"I do think that IBM's message that the bad guys can harvest now, decrypt later is an interesting point that sensitive data stolen that may not be accessible today could still be exploited years from now. If the bad guys can steal now and decrypt my 18-year-old's social security number in five or 15 years that would be worth avoiding."

Big Blue also said it has spent the last three years making significant investments in open-source technology on the IBM zSystems platform to establish a common developer experience across the hybrid cloud for customers. These are designed to help clients use investments in their existing IT infrastructure, clouds, and applications, while giving them the flexibility to run, build, manage and modernize cloud-native workloads on their choice of architecture, IBM said.

IBM's commitment to the it's highly proftabile mainframe stands in contrast to Fujitsu, which last month announced a roadmap to cease manufacturing and sales of its mainframe systems by the end of the decade, with support services being withdrawn five years later.

As Wall Street analyst Bernstein pointed out in January, IBM always benefits from mainframe refresh cycles and the latest could add $600m-800m in revenues in 2022, with a pre-tax profit of between $120m to $200m. ®