Xiaomi has added an earthquake alert system to some of its smartphones, starting with a trial in Indonesia, as a result of a collaboration between the smartphone maker and Indonesian and Chinese government-supported agencies.

Available on handsets running versions 12, 12.5 and 13 of Xiaomi's "MIUI" Android fork, the Earthquake Early Warning (EEW) feature alerts users in Indonesia of nearby tremors – if they have data service and authorize the service. 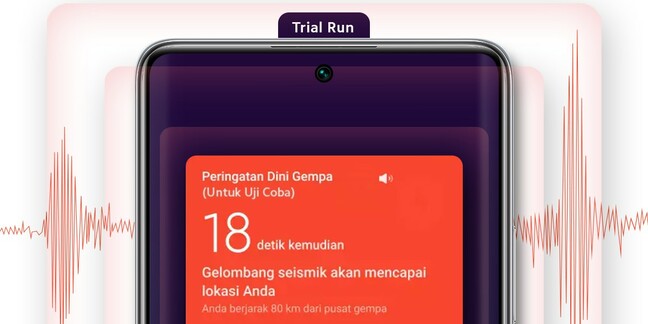 A quake alert on a Xiaomi handset.
Click to enlarge

Users in affected areas receive on-screen and audible warnings – the former detailing the magnitude, estimated time of arrival and intensity of an imminent earthquake. The service only triggers for quakes rated four or more on the Modified Mercalli Intensity scale. If that seems a bit light, know that Indonesia is the most volcanically active nation on Earth and little rumbles are extremely common.

So are big ones, thanks to the nation's position on the Circum-Pacific seismic belt. The United States Geological Survey records over 150 earthquakes in Indonesia with a magnitude above seven between 1901 and 2019 – equating to one around every nine months. Quakes of that magnitude are the ones you read about in the news, along with death tolls in the thousands and repair bills in the billions.

The EEW system is a collaboration between the Institute of Care-Life (ICL) in Chengdu, China, and Indonesia's Meteorology, Climatology and Geophysics Agency (BMKG).

Supported by the Chinese Ministry of Science and Technology, ICL began working on the tech back in 2008. The org said it has successfully sent out up to 65 warnings of destructive earthquakes in China without any false alarms. Over a decade from the start of development, ICL teamed up with BMKG to do the same for Indonesia.

In China, the notifications appear through the internet once the user installs the proper tech – like an opt-in version of the US Emergency Broadcast System. ICL has extended the earthquake alarm system tech to 13 cities and prefectures in Sichuan.

The Indonesian version takes that modernization one step further by teaming up with Xiaomi. Although Indonesia is the second market in the world to receive the EEW, it's the first nation to use it with smartphones. China's state-funded research organizations are therefore helping Xiaomi to differentiate itself in the world's fourth-most-populous nation and 16th-largest economy (and rising fast on both metrics).

There have been efforts to alert folks of earthquakes and other natural disasters before. In 2016, an app from UC Berkely and Deutsche Telekom used the accelerometers built into modern smartphones to sense seismic activity and alert users.

"This special function exists because Indonesia is one of the countries that are prone to natural disasters such as earthquakes, volcanic eruptions and tsunamis," stated Xiaomi.

Xiaomi's director for Indonesia, Alvin Tse, thanked the government of Indonesia for its support, adding: "Through this initiative, we hope that we can help Indonesian people and give back to the local community." ®