NASA: Telework doesn't work when you're building a Moon rover

Progress on NASA's Volatiles Investigating Polar Exploration Rover (VIPER) mission to search for useful chemicals at the Moon's South Pole has been delayed by two tech-related issues springing from the COVID-19 pandemic.

As explained by the space agency's Office of Inspector General and Office of Audits in a report [PDF] published on Wednesday, NASA staff "reported they experienced collaboration challenges due to limitations of remote, virtual interactions caused by the pandemic and resulting mandatory telework for much of the NASA workforce."

Scratch building Moon rovers off the list of jobs that are suitable for the new normal of hybrid work.

The pandemic also made it hard for NASA to get the hardware needed for the rover.

"VIPER long-lead acquisitions – such as the rover solar power array and avionics unit – have been affected by aerospace industry supply chain delays caused by COVID-19, as have delivery of computer boards and motor parts," the report states.

The avionics unit arrived 28 days late and the team worked for 37 days more than planned due to the pandemic. The total cost of COVID-related delays is $16.3 million as of November 2021.

That sum matters, because NASA designed the mission to cost less than $250 million. Above that threshold NASA is required to conduct a Joint Confidence Level (JCL) analysis – a process that considers cost, schedule, risk and uncertainties so NASA can understand if its missions are on track to meet budgets and timelines.

VIPER hasn't undergone a JCL analysis, and the audit document suggests it should have done so – not least because the project's budget has already reached $236 million and the designs (and therefore costs) of its lander and rover are yet to be finalized.

The report rates finishing off those designs as a risk to the project, but concludes VIPER should be ready to strike, as planned, in November 2023.

Whenever it flies, the mission plan calls for the rover to spend 100 days exploring the Moon's soil in the hope of spotting ice nestled within craters. It's hoped a meter-long drill will stir things up nicely. 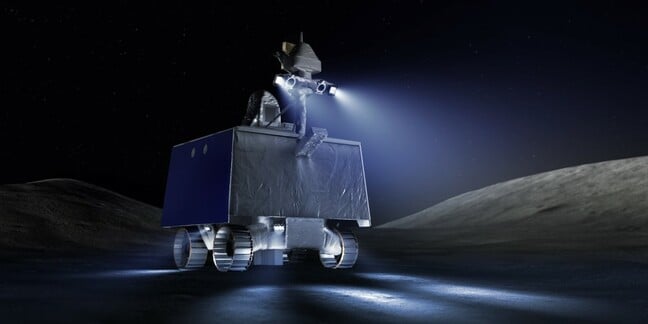 Artist's impression of the VIPER rover.
Click to enlarge

NASA bills the mission as "the first-ever resource mapping mission on another celestial body" and hopes it will reveal where we can find water to fuel future human space exploration. That ambition covers drinking water – hauling H2O into space is stupidly expensive – and using hydrogen and oxygen as rocket fuel.

The mission is also notable for using both a private launcher – SpaceX's Falcon Heavy – and a privately built lander – the Griffin unit developed by an outfit called Astrobotic. ®