Boston-based auction house RR Auction currently has an out of this world item up for bid: IBM computers collectively used aboard twenty Space Shuttle missions.

Between 1981 and 1991, NASA used computers with separate CPU and IOP (input/output processor) components. The CPU and IOP on offer saw the insides of the Columbia, Challenger, Discovery and Atlantis shuttles, including four missions they flew together. In 1991, two-piece general purpose computers (GPCs) became obsolete and NASA upgraded to single units.

The kit on offer appears to be an IBM model AP-101, a device that NASA historians rate as capable of handling "up to 2,048 microinstructions, 48 bits in length."

As IBM tells it, the machines "used the basic instruction set architecture from IBM's mainframe System/360" and could process 480,000 instructions per second. 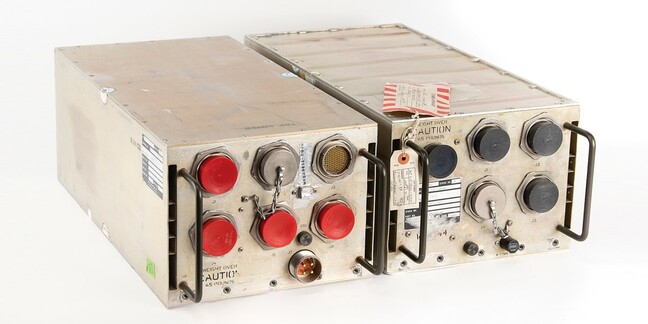 Thanks to modifications made after the loss of Challenger in 1986, the manufacturing date on the units is 1988. The CPU counter indicates it has given up 4,104 hours of operating time and comes with a "flown hardware" tag. The IOP hours meter is covered with silver tape. Both have inspection seals indicating that they are complete and intact.

Both have IBM/Rockwell tags and circular ports on their backs to connect to airducts.

The systems were one of five pairs in the Space Shuttle Orbiter – four operated in sync and the other used to run backup software.

RR Auctions points out that at the time the units flew, they were the brains of the most technologically advanced spacecraft to ever take flight.

The auction house has sold other space type stuff before, including a watch worn by Commander Dave Scott on the Moon during the Apollo 15 lunar landing. That item went for over $1.5 million in October of 2015.