OpenBSD 7.1 is out, including Apple M1 support

The OpenBSD Project has released version 7.1 of its eponymous OS for 13 different computer architectures, including Apple's M1 Macs.

OpenBSD is the security-focused member of the BSD family. Project leader Theo de Raadt co-founded the NetBSD project in 1993, but after disagreements with other core team members, he left and forked the NetBSD 1.0 codebase, releasing OpenBSD 1.2 in 1996. As a generalization, OpenBSD focuses on robustness and security, NetBSD focuses on supporting as many different platforms as possible, and FreeBSD focuses on providing a rich modern OS for the most popular platforms.

Version 7.1 is the 52nd release since then, in which time only two remote holes have been found in the default installation.

As with Linux distros, it's hard to measure usage numbers, but according to surveys such as BSDstats both it and NetBSD trail fairly distantly behind FreeBSD in popularity – then again, installing a data-collecting survey app is the kind of behavior one might expect an OpenBSD user to assiduously avoid.

The Reg FOSS desk ran up a copy in VirtualBox, and we were honestly surprised how quick and easy it was. By saying "yes" to everything, it automatically partitioned the VM's disk into a rather complex array of nine slices, installed the OS, a boot loader, an X server and display manager, plus the FVWM window manager. After a reboot, we got a graphical login screen and then a rather late-1980s Motif-style desktop with an xterm.

It was easy to install XFCE, which let us set the screen resolution and other modern niceties, and there are also KDE, GNOME, and other pretty front-ends, plus plenty of familiar tools such as Mozilla apps, LibreOffice and so on. 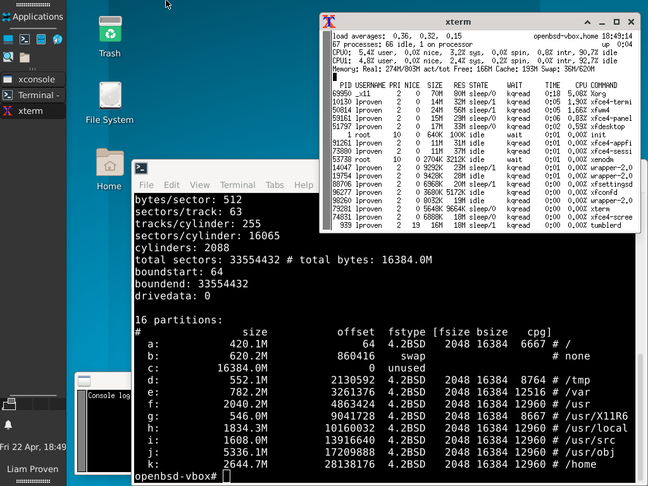 Under the hood, it's all a bit strange. It's not very much like Linux or even macOS: this is a different branch of the Unix family tree, and it's not aimed at newbies. For instance, there's a doas command in place of sudo, but by default it's not configured and doesn't work.

Despite a 16GB virtual hard disk, the automatic partitioning left /usr, /usr/X11R6, and /usr/local distinctly on the small side: 2 GB, 0.5 GB, and 1.8 GB respectively. That meant there wasn't enough room to install Firefox.

Overall, though, we were rather impressed. We were expecting to have to do a lot more work. Yes, OpenBSD is a niche OS, but the project gave the world OpenSSH, LibreSSL, the PF firewall as used in macOS, much of Android's Bionic C library, and more besides. It is more significant than raw usage numbers might suggest.

In a world of multi-gigabyte OSes, it's quite refreshing. It felt like stepping back into the early 1990s, the era of Real Unix, when you had to put in some real effort and learn stuff in order to bend the OS to your will – but in return, you got something relatively bulletproof. If you take the time, this is a good environment in which to improve your Unix skills. ®

What did Unix fans learn from the end of Unix workstations?

From original author Brian Kernighan, one of the original Unix team
Applications23 Aug 2022 | 47