Robots are creepy. Why trust AIs that are even creepier?

We know where we stand with wonky-faced hardware. It's the ones we don't recognize as AIs we should worry about

Something for the Weekend Robots want my face. This is horrifying – not just for me, but for you too. Just imagine: it means robots will be walking around with my face, stuck on their face.

Luckily for me, the process is likely to be virtual, not physical. Nor will I have to do a swap, thank goodness. Knowing my luck I'd end up with neither John Travolta's darling dimples nor Nicolas Cage's vacant visage, but the freaky mush of a post-surgery Bogdanoff twin.

However I'm getting ahead of myself; all of this is in the future. For the moment, we've just about reached a stage where it is possible to present a convincing-looking AI-powered synthetic video of a natural human face that speaks whatever you tell it to in any language you choose – in real time. You can use it, for example, to put a nice face on your product promos, training vids, and weather reports without having to hire an actor and book studio time.

One of the companies working in this tech, HourOne, now says it plans to invite people to enter their own likenesses into the commercial arena. The idea is to allow anyone to add themselves to its database of AI-voiced characters and potentially earn a cut each time their physiognomy gets rented out.

Without any acting skills, you too could become an instant celebrity – an international star of the handheld screen, recognized everywhere you go as the public face of Poopr Suppositories.

You will then discover, as countless actors have before you, that your fans have trouble distinguishing between the real you and the virtual one. You might be flattered by the attention and wowed by the adulation earned by your beautiful face. But in fact you'll be signing autographs and shooting selfies with fans who are utterly convinced that you spend half the day using torpedo pills.

The blurring of the virtual into the realm of reality is a one-way trip. People have no trouble at all accepting a digitally created face fronting an AI that interacts with the real world. If anything, an anthropomorphic look puts the general public at ease: they know they're being fooled and they're fine with it. No problem. But try to stick an artificial human face on a physical robot already in the real world and everyone freaks out. Eww, how creepy! they insist.

Perhaps… but at least you know where you are with a wonky-faced hardware robot. It's the ones you don't recognize as AIs that you should worry about.

We're reaching a crossroads in robot interaction where some choices will have to be made. Me, I prefer my robots to be clunky and dim-witted. That's the only way to be sure they will not take over the world. For example, could a robotic shop assistant ever have come up with this imaginative window display that I spotted over Easter? 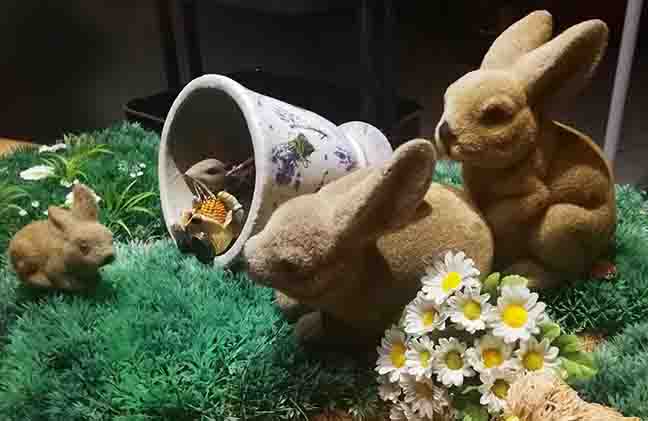 Only a human would think of positioning the bunnies in a shop window like this. Our soon-to-be robot overlords will never be bored teenagers on work experience

Better still, I prefer my robots to look industrial and menacing. If they look as if they could rip your arms off, it keeps you on your toes – assuming they haven't pulled those off already.

For example, in the burgeoning market for automatic cocktail dispensers, my favorite is the MakrShakr bartender which can mix 250 drinks an hour. No offence, but I'll stay on this side of the bar thank you very much. They gave it a name – Toni Veloce – to make it seem friendly. But it has arms that look like they could crush a bus. No tip? How do you fancy being folded into a cocktail shaker?

The honesty of this approach puts me at ease and there's no danger of me getting so sloshed that I'll try to chat it up later in the evening.

What scares me more is the likes of Ai-Da, the robot artist. Not content with creating an AI that can draw and paint independently using its robot arms, the developers gave it a torso, legs, and head which were entirely surplus to requirement… unless that requirement was to get lots of press coverage and a TEDx platform. They even refer to Ai-Da's humanoid features as "ultra-realistic" – which does make me wonder if they thought Gerry Anderson's Terrahawks was a live action series.

It's the obvious lack of realism that makes Ai-Da somewhat disturbing to look at. When that faceless little robovac did a runner from a Travelodge hotel in January, it made us smile. If it had been bipedal and had a wonky rubber face while making its sprint to freedom, we'd have called in the snipers and converged on the Travelodge as a braying mob carrying pitchforks.

As I say, at least you know where you are with ugly hardware. In the virtual world, though, there's no such abhorrence or terror. It's as if being fooled by a purely digital robot is harmless and unproblematic – a victimless crime, as it were. And because we can't hack it to pieces with an ax, we can't see the wiring under the board. We've no idea whether the nice AI personality we were interacting with yesterday has secretly been replaced by evil AI usurpers and is now running on a potato battery as a Portal 2-like punishment imposed by the psychopathic new regime.

So here were are at the crossroads. Shall we continue on the road of hardware fronted with rubbery robot faces that will one day morph into dismemberment machines that look like Arnold Schwarzenegger?

Or shall we go with the uncreepy virtual robot fake humans in the metaverse and eventually be turned, each and every one of us, into figurative potato batteries that keep them running?

Terminator or Matrix? Take your pick. And don't complain nobody warned you.

Alistair Dabbs is a freelance technology tart, juggling tech journalism, training and digital publishing. He would feel more comfortable if legislation could be passed to enforce the design faces of virtual AIs to resemble someone you didn't trust: Tony Blair, Richard Nixon or whatever. That way, we can always be on our guard. More at Autosave is for Wimps and @alidabbs.