Remember the 12-year-old who revived the Unity desktop? Both that and fellow unofficial remix Cinnamon are looking great

Two unofficial Ubuntu remixes came out on the same day as the official flavors: Ubuntu Unity, a 12-year-old wunderkind's revival of what used to be the official Ubuntu desktop, and Ubuntu Cinnamon, which is Linux Mint's flagship desktop environment.

Ubuntu Cinnamon is the older of the two and first appeared in 2019, while Ubuntu Unity came out in May 2020, soon after the release of Ubuntu 20.04.

Ubuntu Unity was created by youngster Rudra Sawaswat, and has the macOS-like desktop that was Ubuntu's standard offering from 2011 until the company pensioned it off in 2017.

To be fair, this was not the first unofficial remix to keep Unity going. That was UMix from TeejeeTech, whose first release was based on Ubuntu 18.04.

The big difference is that UMix isn't free: you have to buy a subscription to get it. TeejeeTech hasn't announced a 22.04 version yet, but it's probably coming soon: the company is still tracking the short-term releases, about a month after Canonical releases them.

Ubuntu Unity is as free as Ubuntu itself, and the new remix continues to evolve. In 22.04, most of the GNOME-based accessory apps have been replaced with the MATE equivalents, such as the Pluma text editor and Atril document viewer. (A handful remain, such as the GNOME system monitor rather than the MATE one, but the differences are trivial.) The System Settings app is the original Unity one, and the Unity Tweaks app comes pre-installed. 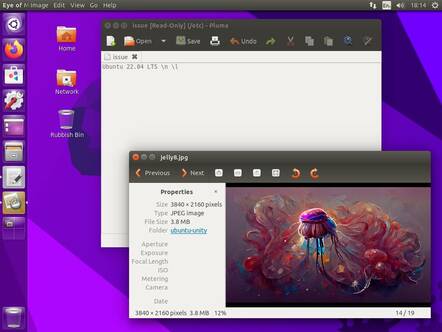 Ubuntu Unity 22.04 showing the Unity desktop and a couple of MATE accessories

The file manager, meanwhile, is Cinnamon's Nemo, which has some handy features, such as space-usage bars under locations in the sidebar, or a tree view if you prefer, and the right pane can be split into two for single-window drag-and-drop. Nemo also displays traditional desktop icons without needing a separate extension. Nautilus used to do some of this, but the GNOME Project is steadily removing features in its efforts to simplify and strip down what it now just calls "Files."

The result is a more "traditional" desktop look and feel: apps have proper title bars, with full menus that appear in the global menu bar at the top of the screen – or in each window's title bar, if you prefer things to be more Windows-like. Call the author a reactionary old git if you wish, but I much prefer this layout. The more "modern" appearance of GNOME, Pantheon (and some modern KDE) apps, which GNOME calls Client-Side Decorations or CSD, removes the menu bar, and combines toolbars, buttons and title bars into a single strip at the top of the window. To the author, this feels like a clunky phone or tablet UI, with functionality hidden away for power users who know the hotkeys. Presumably the hope is to make desktop OSes less intimidating for novices. Handy functions like middle-clicking the title bar to send a window behind all the others, or rolling a window up into just its title bar, are either hard to use or are simply gone.

The new "Jammy Jellyfish" version of Ubuntu Unity also adds support for Flatpak packages alongside Ubuntu's native Snap packages. To do this, it replaces Ubuntu's Software Store with version 41.5 of GNOME Software. Interestingly, this also supports Snap packages, so sometimes, when you search for a package, you might get multiple results: one for the OS-native DEB package, possibly one for a Flatpak, and maybe a Snap version too. This is not ideal – if this happens, it's up to the user to check which is the latest – but it's good to have options.

Speaking of Snap apps, the installed Firefox is also the upstream, Snap-packaged version. It works fine, but it doesn't integrate with Unity's menu bar. We installed the Mozilla browser fork Waterfox instead and it worked fine, complete with global menu support.

In terms of drivers and so on, this is still just Ubuntu. We installed it in VirtualBox, and the standard guest additions from the repository enabled the desktop to resize to fit the window, folder sharing, copy-and-paste between host and guest and so on. On our testbed Thinkpad W520 with an nVidia Quadro 1000M GPU, the installer correctly detected, installed and configured the appropriate version 390 of the binary driver without even asking.

There are some very minor glitches. For instance, the desktop theme: Ubuntu Unity defaults to a modernized theme called Yaru. For some reason, this doesn't appear in the Appearance settings pane: the "theme" entry was blank, meaning that all we could do was pick "high contrast" or the rather broken-looking GNOME "Adwaita" theme – which left no way back. Installing the light-themes package restored the classic Radiance and Ambiance themes, and made it possible to switch between them.

There are dozens of Ubuntu remixes and flavors out there. The official Ubuntu Derivatives page links to 30, and DistroWatch has more than five times as many, including many which are no longer maintained. Most offer variants of the same desktops that Ubuntu itself offers, although a few do their own things.

Unity was controversial at the time, and it still is. Some people liked it, some hated it. If you're a Mac user, or at least have some basic familiarity with macOS, then it's straightforward and easy. It even has a few advantages over Apple's OS, such as how easy it is to open a new window (just middle-click any dock icon), multiple activity indicators per icon so you can see how many instances are open, and familiar Windows-like control keys such as Alt+F4 to close a window and F2 to edit.

Cinnamon – with a bit of Windows-like spice

On the other hand, if you dislike both the Unity and GNOME desktops and want something more Windows-like, but you don't mind GNOME's CSD windows, then Joshua Peisach's Ubuntu Cinnamon remix may appeal.

Cinnamon is the default desktop of both Ubuntu-based Linux Mint and its Debian variant. 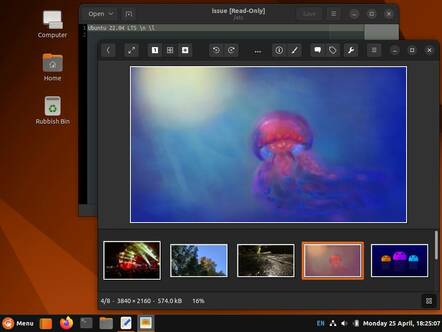 Ubuntu Cinnamon 22.04 has a brown-and-orange look and distinctly gnomish apps

This means most of its apps lack menu bars, except for the Nemo file manager and LibreOffice. For these classic-style apps, the Ubuntu Cinnamon distro has tweaked the GNOME title-bar layout to be more Windows-like: minimize/maximize/close buttons at top right, and a window-management menu at top left.

The result is a bit of a mismatch. The Linux Mint project has forked most of the GNOME accessories to create cross-desktop X-Apps, with the classic separate title bar, menu bar and optional toolbar. This means a fairly consistent feel across the OS, with a handful of CSD apps that stick out.

Ubuntu Cinnamon doesn't have any of the X-Apps, so you get the reverse: CSD-style GNOME accessories everywhere, except for the file manager and office suite.

As of yet, no Ubuntu flavor includes the X-Apps, which is why Ubuntu Unity went with the MATE accessories instead. We feel that Ubuntu Cinnamon should do the same, for a more consistent look and feel.

If you want that, of course, you could choose the official MATE or Xfce remixes, but Cinnamon's roots as a fork of GNOME 3 do offer a significant potential feature that MATE, Xfce and indeed Unity cannot do: fractional scaling. This is clearly labelled as an experimental feature, and in testing, we couldn't get it to work, so for now, this remains a theoretical advantage. If some future update activates it, it will allow you to set scaling factors of 75, 100, 125 or 150 percent on a per-monitor basis, which is very useful if you have both standard-definition and Hi-DPI screens attached. For now, though, you'll just have to pick a lower resolution and put up with some fuzziness.

These caveats aside, though, Ubuntu Cinnamon is maturing nicely in the new version. While Ubuntu and Ubuntu Unity are now purple-toned, Ubuntu Cinnamon has switched to a restrained theme in shades of dark orange and brown, which reminded us of the tasteful earth-toned Ubuntu of the old GNOME 2 days. It looks significantly better than the most recent short-term support release.

TIme to make it official?

Both these desktops are X.11-based, so there's not a trace of Wayland in either distro. Both also benefit from having working 3D acceleration: neither is ideal for use in a virtual machine, but Cinnamon is especially laggy without 3D passthrough.

There is an option on the Ubuntu Cinnamon login screen to use software-accelerated rendering, but in testing, it didn't make much visible difference. Unexpectedly, there is also a fallback option of a complete Xfce desktop, which worked fine (and quickly). Neither Unity nor Cinnamon are especially lightweight environments: in our tests, Unity used about 720 MB of RAM at an idle, while Cinnamon used about 940 MB. Compare this to GNOME 3, which took about 960 MB. There's still room at the bottom for Lubuntu and Xubuntu.

Both the Unity and Cinnamon remixes are aiming for inclusion as official Ubuntu flavors, which shows in their choice of accessories, synchronization with the upstream release schedule, and so on. In the longer term, Cinnamon probably has more chance, as that desktop is in active upstream development, while Unity 7 is in bugfix-only mode now. We also fear that bundling Flatpak won't help Ubuntu Unity's chances.

The UBPorts community is continuing work on the mobile version of Ubuntu, which uses the touch-capable Unity 8. Whether this ever matures enough for use on the desktop remains to be seen. The Ubuntu Unity project is working on its own desktop, UnityX, but it is still in its early stages. (Sadly, the old Qt-based Unity-2D, which Canonical stopped work on back in 2012, seems to be forgotten now.)

Both remixes are good steps forward compared to their older versions.

For the author, Unity remains the best Linux desktop there's ever been, and I'm delighted that it's still available for new installs, but if you want the combination of modern GNOME apps, a Windows-like desktop, and the possibility of fractional monitor scaling, then Ubuntu Cinnamon is shaping up well. ®