Intel has shed some light on its participation in a DARPA program set up to aid the development of autonomous combat vehicles that can go off road.

The x86 giant on Tuesday outlined its involvement in the US government agency's Robotic Autonomy in Complex Environments with Resiliency – Simulation (RACER-Sim) project.

RACER-Sim is part of DARPA's wider RACER program to foster the advancement of self-driving machines that can keep up with human-controlled vehicles over tough terrain amid conflict and other real-world situations. RACER-Sim, as its name suggests, involves the creation of simulations in which these autonomous systems can be developed and tested before being tried out in the real world. That's useful because it's a good idea to perfect the code as much as possible in a virtual world, where it can do no actual harm or damage, before putting it behind the wheel of pricey and dangerous hardware.

In January, DARPA said Duality Robotics and Intel were chosen to be the prime contractors for RACER-Sim. "The RACER-Sim portion of the program looks to expand current simulation capabilities and physics-based models to support the testing of off-road autonomy in virtual environments," said RACER program manager Stuart Young. "These simulation environments will allow teams to test and validate portions of their autonomy stacks without having to spend large amounts of time and money with field testing."

Duality said it will work with Neya Systems, a division of Applied Research Associates, on its contributions to RACER-Sim, which include a "20 km x 4 km photoreal and tunable virtual environment to simulate vehicle's diverse operating conditions."

This week, Intel said, as part of its participation in the study, it is collaborating with the Computer Vision Center in Barcelona, Spain, and the University of Texas at Austin in the United States. DARPA's budget for phase one, at least, for RACER-Sim was set at approximately $6 million; Intel acknowledged "this research is funded in part by the US government." 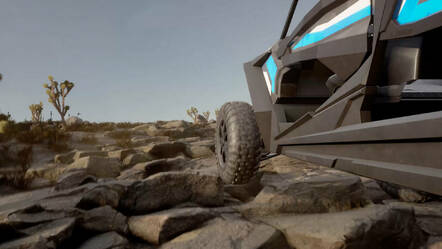 Intel said there are plenty of simulation environments out there that mimic real-world conditions, "but few are optimized for off-road autonomy development at scale and speed," which this project aims to provide. The conditions a vehicle experiences over difficult terrain, Intel said, are simply too much to make off-road simulations anything but expensive and slow ... though presumably not too expensive or taxing for an organization like Intel.

The chip factory behemoth said its approach to RACER-Sim will play out over 48 months over two phases. The first phase of Team Intel's plan "is to create new simulation platforms and map generation tools that mimic complex off-road environments with the highest accuracy," including physics and vehicle sensor modeling. In particular, Intel wants to create a simulation area at "never seen before" scales of more than 100,000 square miles.

Once Intel and its partners jump that first resource-intensive hurdle, phase two will involve joining up this Star Trek Holodeck-like technology with the wider RACER program's contributors so that their robot vehicles can be not only tested and validated but trained in the virtual worlds.

Self-driving tech has been an area DARPA has been funding for years. In 2004 the research arm of the US Department of Defense ran its first Grand Challenge, with a $1 million prize for an autonomous vehicle that could drive a 150-mile (240km) course in the Mojave desert without a human taking control. The results were hilariously bad, with none of the contestants making it more than a few miles.

The next year DARPA reran the challenge, this time with a $2 million prize; a team from Stanford University won it in a Volkswagen Touareg R5 kitted out with seven Pentium-M processors in a rack to do the computation. Intel brought the car to its Developer Forum that year, nearly choking conference members by driving a diesel vehicle into the San Francisco auditorium.

Intel persisted in the field, buying autonomous vehicle systems outfit Mobileye in 2017 for $15 billion. Last year, the Xeon processor giant announced it would be taking Mobileye public to get its money back, while still retaining control of the biz. ®