3-year deal with Toshiba to run tech with customers across the CIty, West End, and Slough

Updated BT and Toshiba have announced the trial of a commercial quantum secured metro network in London, set to run for three years to evaluate the use of the technology.

The London quantum secured metro network has netted accounting firm EY (formerly Ernst & Young) as its first customer. The company will use the network to connect two of its sites in the capital, one at Canary Wharf in London's Docklands, and the other near London Bridge. However, BT said there will be other users over the three-year period of the trial.

It's not a pure technology trial, as we now have a good grip on the maturity of the technology, but we want to see how customers react... and we need to figure out what to charge for it

Toshiba is providing the QKD hardware and the key management systems, and last year announced it had managed to shrink the optical circuits required for QKD systems into discrete transmitter, receiver and random number generator chips. 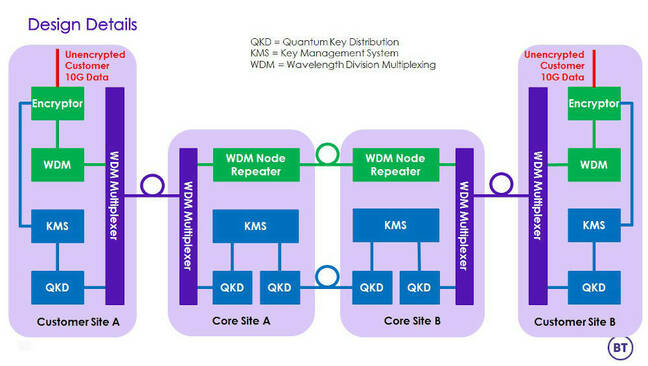 Quantum network diagram according to a BT presentation

QKD is a way to securely distribute encryption keys, which are then used to encrypt and decrypt data for end-to-end transmission using standard public key algorithms. It encodes each bit of the key using a single photon, and because of the quantum nature of these, any attempt to read the photons would alter their quantum state, which can be detected.

The trick to enabling a working quantum secured network is to enable both the QKD and the data traffic to use the same optical fibres, rather than a dedicated fibre connecting a couple of endpoints - as BT did with a test deployment in Bristol in 2020. BT said it has addressed this by operating the QKD on a hop-by-hop basis, with intermediate QKD systems at nodes in the network path.

Prof Andrew Lord, BT's head of Optical Network Research, told us that the three year trial is not to evaluate the technology itself, but to assess how it is received and how to proceed with larger scale rollouts of the technology in future.

"It's not a pure technology trial, as we now have a good grip on the maturity of the technology, but we want to see how customers react to it, and we need to figure out what to charge for it, and these are more commercial questions," he said.

The current quantum secured metro network comprises three nodes, with two in London and a third at Slough in Berkshire, about 32km (20 miles) to the west, but the network technology "could scale up to the whole country if necessary," Lord said, adding that any future plans will depend upon the success of the three-year trial.

Those 10Gbps links can also be upgraded to 100, 200 or 400Gbps in order to carry traffic from multiple customers, according to Lord, and Toshiba's QKD hardware is capable of generating thousands of keys per second to support scaling up to a large number of users.

"Quantum secure data transmission represents the next major leap forward in protecting data, an essential component of doing business in a digital economy," EY UK and Ireland managing partner for Technology, Media and Telecoms Praveen Shankar said in a statement.

Meanwhile, the UK government has previously signalled its intent to develop the country into a "quantum-enabled economy", and BT said that the new London network represents an important step towards building a national network for quantum secured communications. ®

EY contacted us to point out that the quantum secured metro network is currently being used for testing purposes only. BT confirmed to us that it is working with EY to explore services / use cases, and that it expects the network to carry some of EY's live traffic in the coming months.