US Linux boxshifter System76 has released the new LTS version, 22.04, of its custom Ubuntu remix, Pop!_OS (or "Pop" for short). The Reg FOSS desk took it for a spin.

There are, as we mentioned recently, a lot of Ubuntu remixes out there. Some are official, some unofficial; some track every release, and some only the Long Term Support (LTS) versions. This means that every time a new Ubuntu LTS release appears, a host of other distros follow close behind. System76 is a little different from other distro remixes, though.

System76's primary business is selling laptops, desktops, and servers specifically built to run Linux. We covered a little of the company's history when we looked at Pop!_OS 21.10 last year. Back in 2017, it decided to do its own custom version of Ubuntu – and in a move that's won it both publicity and popularity, it makes the remix available to everyone, not just its customers. 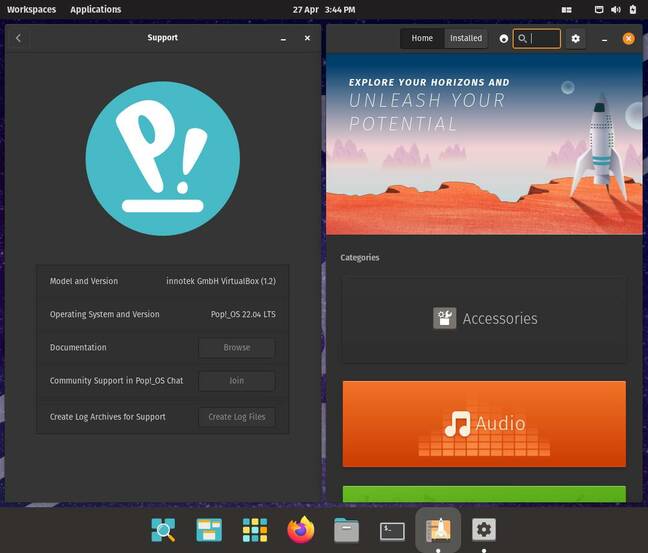 Pop is one of the more radical remixes out there: it changes many aspects of the upstream OS, with a different installation program, desktop, accessories, even a different bootloader. They're not all in-house – the installation program was co-developed with Elementary OS, on UEFI machines it uses systemd-boot to load the OS rather than GRUB, and its COSMIC desktop is based on GNOME with various custom extensions to change the look and feel.

We've covered the OS and its desktop before, as well as the company's plan to build a totally new desktop in Rust. That's not here yet so in version 22.04 the desktop remains GNOME. This time, it's a customized GNOME 42. The changes are wide-ranging and quite impressive. It has automatic window tiling, which is off by default but worth a try because it works surprisingly well, especially on bigger screens. This version claims improved support for Hi-DPI displays and multiple monitors.

The COSMIC desktop has its own dock, based on the same Dash-to-Dock extension as Ubuntu's Dock but with different customization. The dock can be at the bottom, left or right, and can span the width of the screen like a panel or float – whichever you prefer. Pop also has a vertically oriented workspace switcher, as GNOME did before version 40, which we feel makes better use of widescreen displays.

There are some welcome changes in this version. You can pick custom mount points for multiple partitions without formatting them – so Pop can readily use a pre-existing /home partition. This fixes an issue we had with the previous release. If you install on a BIOS-based machine, it uses the ordinary GRUB bootloader. However, the os-prober package isn't installed by default, and even if you install it yourself, it doesn't work and GRUB won't detect other OSes. You need to manually enable it by adding the line GRUB_DISABLE_OS_PROBER=false to /etc/default/grub, then it works as you'd expect.

The installation program is noticeably quick, and by default it enables full-disk encryption, although that's easily turned off if you prefer. A drawback is that Pop does not support Secure Boot. Most experienced Linux users probably turn that off, but it may be off-putting for a few.

Pop does not include Canonical's Snap packaging format, instead bundling Flatpak. It also has a native installation of Firefox, so the browser can handle GNOME Shell extensions, unlike in Ubuntu. Pop includes its own software store, the Pop Shop, in place of Ubuntu's Software Center, and there are extra apps in there, such as Google Chrome, Skype, Steam, the Franz messenger and others.

Pop has also customised the GNOME Settings app quite extensively, with options to control the various added and customised features, all in the same place, which is very welcome. New functionality in Settings includes a Support section which connects you directly to Pop's online documentation, support chat channel on Mattermost, and can generate logs and config files to send to System76 tech support if you're using their hardware.

Less visible but equally significant, Pop uses the Pipewire audio server in place of the more common PulseAudio. Pop comes with kernel 5.16, a newer version than upstream Ubuntu's 5.15, and you can expect to get newer kernels as they become stable. Like any modern distro, the OS will automatically prompt you about outstanding updates – but just once a week, and that interval is configurable. The display server is X.org, and Wayland isn't installed by default.

We were quite impressed with Pop!_OS 22.04. It installs fast, boots fast, and feels fast. The COSMIC desktop gives GNOME 42 a distinct boost: while vanilla GNOME can feel like it's really aimed at users who live in one maximized window most of the time, COSMIC's tiling windows felt like a power-user feature, and it's easy to use, maximizing and minimizing and quickly getting to a convenient layout. If you want to dual-boot with other OSes, we found that using BIOS boot proved a lot less painful than UEFI boot was in the previous version.

Lots of distros adjust and tweak GNOME. Both Linux Mint's Cinnamon desktop and Zorin OS mold GNOME into something more Windows-like. Ubuntu adds a dock and some theming to lend GNOME a faint resemblance to the older Unity environment. COSMIC's changes are bolder, add useful new functionality, and we like the result: it feels fast, modern, and powerful. ®