Your software doesn't work when my PC is in 'O' mode

Code so clever it is like perpetual motion. In C++

On Call Modes of operation always present a challenge for users. Especially when they invent their own. Welcome to a mysterious On Call with an all-too-obvious solution.

Today's contribution comes from a reader Regomized as "Ivor" and concerns a particularly puzzling support call from a customer struggling with Ivor's software.

It was regarding a PC setting he'd never heard of. We should explain that Ivor worked as a developer and development manager for his employer for well over a quarter of century and would be forgiven for thinking he'd heard it all. But there's always that one ever so special case.

"Your software doesn't work," was the complaint. Simple enough, right?

Maybe not. Ivor explained that the customer "reported our software would only work if the computer was in 'I' mode."

Ivor was baffled. "This was the '90s," he said, "and no one could think of such a config option in our software."

There were different modes in the platforms of the era. Who can forget Windows 3.1's "constant crashing mode" (aka "standard mode") versus the "crashes a bit less mode" (aka "enhanced mode") or the MS-DOS MODE command, responsible for setting the mode of operation for printers or the serial interface?

But "I" mode and "O" mode were new to Ivor and the team and they gently probed the increasingly frustrated customer to work out what the problem was.

The customer explained again: "Your. Software. Does. Not. Work. In. O. Mode."

Perhaps this was a reference to the MODE command of the BBC Micro Model B. MODE 0 would put Acorn's finest into 80 column mode while MODE 1 was a bit more graphical. The BBC Micro (along with its successor, the Archimedes) was, after all, only discontinued in the 1990s. So not too far-fetched… if it wasn't for the fact that this software was designed to run on a PC.

The questioning went on and when "we managed to ascertain it was a button with 'I' and 'O' on it," the penny dropped.

The customer was referring to a rocker switch on the PC. "To be precise," said Ivor, "the on/off rocker switch."

There's no record of how the conversation with the customer went as Ivor explained that "O" meant the PC was off and just about nothing would be running, not even his software. We imagine that the sentence "'O' is for Off and 'I' is for Idiot" wasn't too far from his mind. 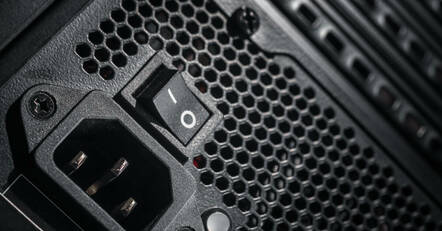 Ever had a user who such a high opinion of your software that their expectation was that it would run even in the absence of power? How did you reset their hopes and dreams? Share your tale of support shenanigans with an email to On Call. ®

On-Call Even with instructions staring them in the face, this genius couldn't get it right
Software27 Jan 2023 | 156

New IT boss decided to 'audit everything you guys are doing wrong'. Which went wrong

Cleaner ignored 'do not use tap' sign, destroyed phone systems ... and the entire building

This can’t be a real bomb threat: You've called a modem, not a phone

Don't lock the datacenter door, said the boss. The builders need access and what could possibly go wrong?

An IT emergency during a festive visit to the in-laws? So sorry, everyone, I need to step out for a while

Server broke because it was invisibly designed to break