Meetings in the metaverse: Are your Mikes on?

You thought Zoom was bad? Welcome to the Thunderdome

Something for the Weekend The bloke next to me is acting strangely. Sitting bolt upright and staring straight ahead, he is holding his hand, palm forward, level with his face.

"You don't need to raise your hand, Mike. It's not Zoom, ha ha," laughs the meeting's chair.

Mike remains motionless, stiff as a board, hand still up, not saying anything. So we ignore him and carry on with the discussion.

Such a thing was commonplace in conventional virtual meetings back in 2022. But now we're doing it in the metaverse, sitting next to what looks like a three-dimensional person whose internet connection has frozen makes me feel rather uncomfortable. It's like I've been invited to a Day of the Dead dinner party down at the metaverse Mexican morgue.

It's doubly alarming when he vanishes. Even though everyone in the meeting room knows there is no actual meeting room and that we're all just virtual 3D representations in the metaverse, Mike's sudden disappearance makes our avatars jump in surprise. This is going to take some getting used to.

I noticed this when entering the now-obligatory waiting room before the meeting began. In the pre-pandemic era, you could turn up for a real-world meeting, walk in and sit down. Or if it was on of those 8am "stand-up" meetings so beloved of inadequate project managers, I'd walk in and sit down anyway. Heh. But these days we have to kick our heels in a purgatorial pre-meeting airlock before being allowed in, as if we're waiting for a dental appointment except without any copies of Readers' Digest or an out-of-date Ikea catalogue to keep us amused.

Pre-pandemic, nobody gave me a list of rules when walking into a real-world meeting. Nobody told me to make sure my name was correct. Nobody asked me to tape my mouth shut when not speaking. Nobody felt obliged to remind me not to flash the other attendees. But since the era of Teams/Meet/Zoom, all this obligatory net community baggage – and more – has been lugged into the metaverse.

The insistence of real names is a shame in itself. I used to enjoy early Zoomers in which poshly spoken company executives would inadvertently be listed on-screen for the first half an hour as DRTYMUTHAFKR thanks to the intervention of their teenage kids.

While idling in the waiting room prior to this metaverse meeting, a copious list of dos and don'ts were presented to me and I had to tick them off a 3D clipboard with a 3D pen. Real name [tick]. No scary heads [tick]. No offensive language [tick]. No weapons [tick]. No forgetting your trousers [tick]…

I put some of this down to poor education. I left school armed with rudimentary tools for daily interaction with humans and my immediate surroundings but I get the impression this is no longer obligatory on the curriculum. Everything these days needs an idiot-guide.

Mme D bought some shoes this week and they came with instructions, including the sage advice: "Try on shoes before purchasing as the wrong size could result in blisters or other problems," and the incontestable "Using in slippery places may cause the wearer to slip or fall down." 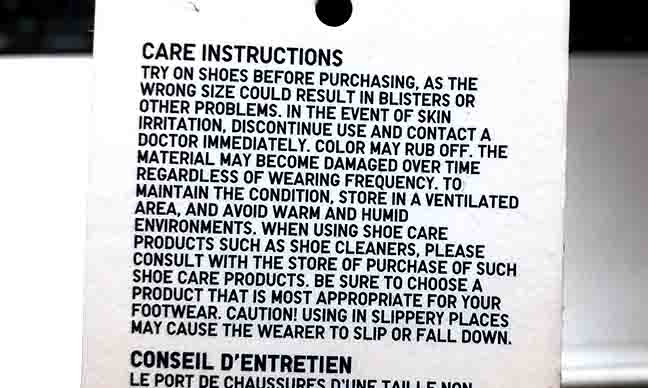 By the time I had completed the waiting room checklist – the final items were "Do not punch yourself repeatedly in the stomach," "Do not gargle wristwatches," and "Do not wear shoes in a slippery place" – I was allowed into the meeting room itself.

Piped muzak began playing as I entered. After a hiatus of several years during which it was considered impolite for a website or app to launch audio automatically when you land on any of its pages, unsolicited music is very much back in fashion. Not just in restaurants and rag shops, crap pop now blares out from every retail website you visit, and it's utter cacophony everywhere you go in metaverseland. If only somebody had warned folks what a stupid trend this was back in 2022 but it's too late now, I guess.

In the present, my meeting is continuing without Mike, which is a shame as he'd brought all the documentation for us to read. One great thing about metaverse meetings is that you can read a document while you are engaging with your colleagues, just like in real life, instead of flinging everyone against the wall or hiding them altogether whenever a document is shared full-screen. Mike had brought the docs and dumped the 3D virtual sheets in a virtual 3D stack on the 3D meeting table for us to pick up and read.

But when he froze, so did the docs. We cannot turn the pages or indeed put the bloody things down on the table. Whatever page each attendee is looking at is superglued to our hands.

Another attendee interrupts the conversation by waving his hand (the page glued to it flapping in the metabreeze): "Excuse me, Mike's just sent me a message. He says he's back in the waiting room. Could someone let him in?"

Mike reappears. The docs we are holding are freed up for a couple of seconds – we all mutter "Ah, good…" – before being whipped out of our hands and returned to the pile on the desk. We reach across and pick up our copies again.

Mike apologizes for dropping out, blaming the poor Wi-Fi in his kitchen. He assures us he has moved to a location in the house with better signal. This is confusing as he is sitting next to me as before. He is also sitting opposite me, which is odd. Both Mikes are speaking in unison.

"Oh yes, sorry," say the Mikes. "I thought I would connect using my phone as well as my tablet, just in case. Look, I wanted to say something…"

Both Mikes go very still. We wait. We listen to the piped muzak for a while. The Mikes don't move a muscle and sure enough, after a few more seconds, they both vanish.

The chair, exasperated, walks over to the waiting room door, yanks it open violently and props it open with some virtual Ikea catalogues. He tells Mike to get in, stop messing around, and let himself in next time.

Three Mikes walk in and settle down in available chairs, allowing the meeting to continue without further interruption. They keep quiet and we try to ignore them. From time to time, another Mike walks in and joins us around the table.

By the end of the meeting, there are a dozen Mikes in attendance. Three of them are making paper planes from the pile of documents; four have stood up and wandered over to look out the window; another two are having an argument and calling each other "Boomer"; the Mike next to me is muting another one.

"How are we doing for time?" I ask, putting down a financial report that has changed into a set of videos of cute cat mishaps and various idiots doing alarming 15-second dance routines.

"No doubt the end is coming," confirms the chair to our mutual relief. "We're out of time."

Those of us who were supposed to be there stand up and walk out the door, past another 17 Mikes who are trashing the waiting room, and into the psychotic pandemonium of the open-plan metaverse office, where 30 more Mikes are pulling up the carpet tiles, spray-painting the walls, running up and down the aisles stark naked and shouting "Millenial!" at the tea robot.

Phew, it's a relief to be out.

Alistair Dabbs is a freelance technology tart, juggling tech journalism, training and digital publishing. If nothing else, he wishes the revival of ugly piped music in shops could be stopped immediately. The music is getting worse, he says, but it is also getting louder. More at Autosave is for Wimps and @alidabbs.