Applications in lunar exploration and Earth-bound locomotion are possible

Scientists with a grant have done what none thought possible – perhaps few even gave any thought to – and smashed the world record for the highest jumping robot.

With a design resembling two bicycle wheels held together with rubber bands, the engineered jumper can leap more than 30 metres high, 100 times its own height and could one day lead to applications in lunar exploration.

Designed by Elliot Hawkes, Santa Barbara assistant professor at the University of California, the human-made hopper outperforms any known mechanical device and equals the best biological bouncers – relatively speaking – according to a paper published in Nature this week.

The findings could change the way we use jumping robots, and demonstrate a new level of performance for artificially engineered jumping, the researchers argue.

For decades, engineers have designed jumping machines that often mimicked or took inspiration from biology. Weighing just 30g and measuring 30cm, the specialized artificially engineered robot can jump 32.9 meters high. It employs a rotary motor to multiply the work and uses specially selected springs and rubber bands that allow the system to store energy.

"Muscles and motors cannot generate the high-power outputs necessary to propel these jumpers on their own. Instead, many biological and engineered systems use muscles and motors to store energy in spring-like structures. They then use latch mechanisms to release the spring energy to launch (actuate) the jump. This method of amplifying muscle power is known as latch-mediated spring actuation," Sarah Bergbreiter, professor of mechanical engineering at Carnegie Mellon, said in an accompanying article.

Using this approach, the froghopper, a tiny plant-sucking insect, can jump to a height of 70cm, around 115 times its body length. But the engineered device reported this week performs a similar feat relative to its size, at a much larger scale.

"A surprising feature of Hawkes and colleagues' robot is its relatively large size. The best jumpers propelled by springs in biology are typically limited to having masses of several grams or less, whereas jumpers with larger mass (such as humans) benefit from direct muscle power instead of spring actuation. But this robot has a mass of 30 grams, which makes it more than 10 times heavier than the largest spring-actuated jumping organisms that inspired it," Bergbreiter points out. 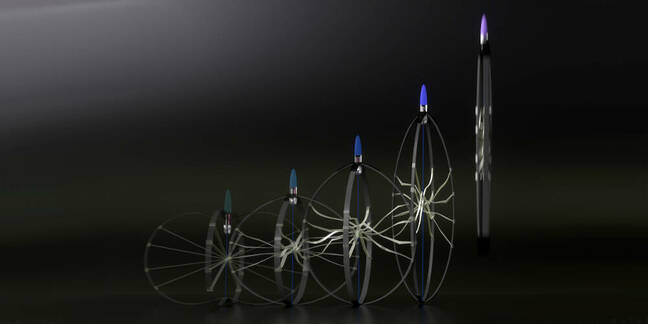 The researchers hope the rubber band and carbon fibre combo will find applications in the real world, and beyond.

"Our results change the implications of jumping as a means of locomotion, changing how and where jumping could be used," the research paper said.

On Earth, jumping robots could overcome obstacles previously only navigated by flying robots while collecting vision-based data of the ground below, the researchers said.

"On the Moon, the leaps of the presented jumper would be even loftier: 125m high while covering half a kilometer in a single bound," they added. ®