Datacenter energy use has eclipsed power consumption among all rural homes in Ireland, according to figures from the country's Central Statistics Office (CSO). The trend is set to continue if 2020-2021 data holds with datacenter power draw growing by nearly one-third between 2020 and 2021. 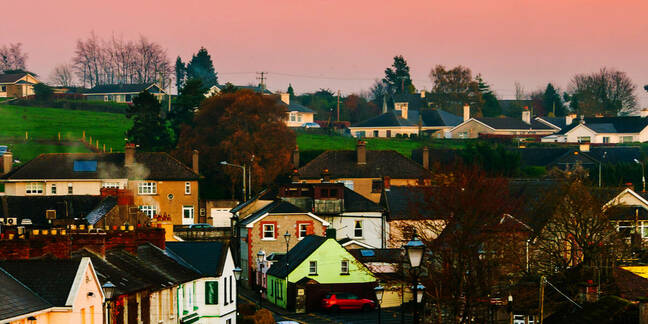 Aerial view of the town of Cashel in Tipperary, Ireland. population 4,422 according to a 2016 census

The National Planning Framework, published in 2018 by the Irish government, defines rural as all areas outside towns with a population of less than 10,000 [PDF]. Ireland has a large rural population, with 1.8 million people (36.35 percent) who live in rural areas, well above the EU average of 27.3 percent.

As reported by The Irish Times, the latest figures from the CSO show that the percentage of metered electricity consumed by datacenters in Ireland has risen from 5 percent in 2015 to 14 percent during 2021. This compares with 12 percent for the total power consumed by rural residential consumers during the same year, although still less than the figure for residents in urban areas, who accounted for 21 percent of electricity consumed.

There are now estimated to be about 70 datacenters in Ireland, operated by internet giants such as Amazon, Facebook and Google, and not forgetting Microsoft, which opened its first datacenter outside of the US near to Dublin in 2009.

Concerns were expressed in the past about the amount of energy consumed by datacenters, but according to figures from the International Energy Agency (IEA), while datacenters account for approximately 1 percent of global electricity use, improvements in energy efficiency mean that their global energy consumption has only increased 10 percent over the past decade despite workloads having grown by 9.4 times over the same period.

However, tech firms have committed to measures to make IT infrastructure more energy efficient in future. For example, AMD this week gave a progress report on its 30x25 plans to deliver a 30-fold increase in energy efficiency across its high-performance compute (HPC) platforms by 2025, which would mean reducing the power required by 97 percent compared with 2020 levels. ®

Grid-interactive UPS tech to feed some power back to the grid from backup energy storage systems... for a price
On-Prem8 Jul 2022 | 15