Released yesterday, "DingTalk XR" extends the DingTalk experience into what the company has called "extended reality" by running on smart glasses from an outfit called Rokid.

The Rokid Air smart specs work when tethered to a smartphone and project a 1920x1080 display that appears to float before wearers' eyes. 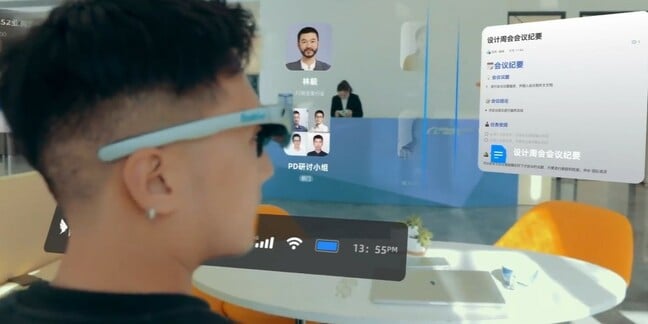 A demo video shows a user effortlessly using DingTalk with a combination of glances, swipes on the tethered smartphone, and a wireless keyboard.

Alibaba claims it has over 500 million users across 30 million businesses, so there's a substantial potential audience for this offering.

However, buyers might rightly pause when they learn that the smart specs required cost ¥3899 ($584) apiece. In China they're sold on Alibaba's own Tmall shopping services, and elsewhere they're available through crowdfunding site Indiegogo (which currently warns shipments are delayed) for $489. DingTalk has apparently made the specs available through its own store, too.

Wherever you buy the device, you'll be able to acquire a low-end laptop for the same sum. And that device will likely have longer battery life and be more mature than any smart specs.

But a low-end laptop will also lack any kind of VR-related cool factor, and DingTalk XR clearly has plenty of that. Which is nice, although there is precious little evidence that VR/AR makes a difference to everyday productivity. The tech has found a niche in applications like architecture and design that can benefit from experiential simulations. ®