Sonoma Creek to target non-AI experts, according to docs seen by El Reg

Exclusive Intel plans to start selling a software platform that promises to simplify and speed up the training of AI models for computer vision, according to internal company documents seen by The Register.

The software, code-named Sonoma Creek, is set to launch this fall, and the semiconductor giant plans to sell it as a subscription or license, which is part of a fresh push by the x86 giant to buoy chip sales with a growing stable of commercial software products. Intel also sees Sonoma Creek as a way to boost adoption of its free OpenVINO software toolkit for AI inference work.

The chipmaker thinks Sonoma Creek will benefit multiple industries. This includes manufacturing, where computers can monitor assembly lines and look for defects, and healthcare, where computers can detect anomalies in medical imaging. Other industries cited include smart agriculture, smart cities, retail, and video safety.

Development of Sonoma Creek has been under wraps for some time. However, there have been some public references to the software. This includes a publicly accessible online workshop Intel held for users in South Korea last year that featured a company representative discussing the software. The CEO of Intel's Korea business also mentioned Sonoma Creek in a Korean news article in December.

In one presentation, Intel says Sonoma Creek brings together five important steps of AI model training said to be fragmented across multiple services in a "single workflow." These five steps are data collection, data labeling, model selection and training, model optimization, and deployment. 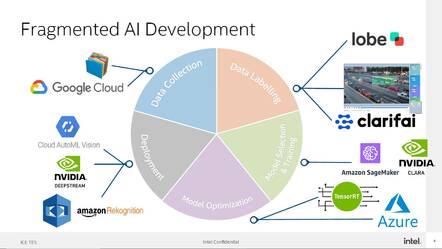 The software works like this, according to multiple documents: 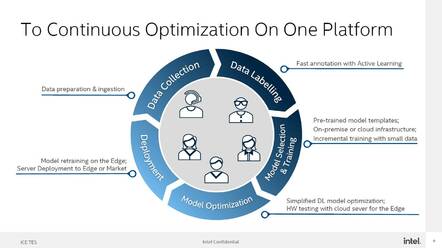 Sonoma Creek starts training computer-vision models using the PyTorch and TensorFlow frameworks with as few as 10 to 20 images, or a video.

Once enough data is annotated, Sonoma Creek will automatically train the model and make predictions, which users will approve or edit to also improve the model's accuracy.

After that, users export the model for inferencing using the model's original framework or using Intel's OpenVINO toolkit, which optimizes the model for a variety of Intel hardware, including CPUs and GPUs.

If a model isn't accurate, users can make corrections by adding new images and labeling those images before exporting the model again. This process of continuous model improvement is dubbed "active learning."

In an internal explainer for Intel employees, the company says Sonoma Creek comes with an intuitive web-based graphical user interface. This, combined with the annotation assistants, "help[s] expedite annotating data and reduce[s] time to deployment," according to Intel. Sonoma Creek also allows users to "combine multiple tasks," such as detection and classification, "for a more granular model development."

Intel says these and other features "set the platform apart from other" no-code or low-code development platforms that have become popular.

Sonoma Creek runs on Intel CPUs and Nvidia GPUs for desktop PCs and servers, though Intel plans to support its own GPUs in the future. 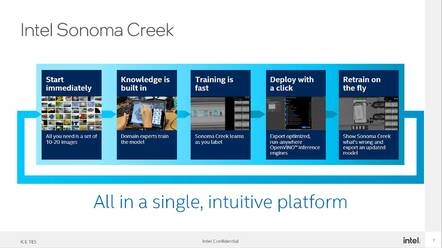 Intel began prototyping Sonoma Creek with early users in the second half of last year, and the software has been in an early access program for the past few months, according to one document. All of this is building up to the company's plan to launch the software as a commercial offering this fall.

The x86 giant plans to sell Sonoma Creek as a subscription service or software license. The software will be available for on-premises servers and through cloud services providers. For cloud deployments, users will be able to access the software in virtual machines or Kubernetes containers.

One route to market Intel is looking at are system makers, which is how the company has already been selling some of its current software products.

Intel is working on Sonoma Creek as the company hopes to buoy chip sales with software revenue and become a bigger player in the AI space.

The x86 giant has been working to catch up with Nvidia, which has built a comprehensive portfolio of hardware and software for AI over the past several years that has made it a favorite on Wall Street.

On the hardware front, Intel is taking multiple tracks, putting new AI features into its CPUs, while expanding its portfolio of specialty chips, which will eventually include new discrete GPUs the company plans to release for servers later this year.

As one document states, Intel views Sonoma Creek as the "next level" in the company's AI strategy. The big questions are whether enough organizations will find the software useful and whether it will fall in line with the "ecosystem-friendly" promise Intel CEO Pat Gelsinger has made.

Sonoma Creek will join a growing stable of commercial software offerings that Gelsinger believes will help Intel better compete against rivals by making its hardware more attractive. After making $100 million on software last year, the biz hopes to increase that to $150 million this year.

That $150 million figure may be a pittance compared to the $76 billion Intel expects to collect in sales this year, though Gelsinger has promised that software will have an outsized impact on the company.

"We're going to grow it rapidly, but we're going to pull through platform differentiation, which is going to [have a] very disproportional business benefit, even though the near-term revenues are rather small," he said at an investor meeting in February. ®