Intel Vision Intel has said it has put "desktop-caliber" silicon in a mobile package to provide its fastest 12th-generation Core laptop processors yet.

The chipmaker unveiled the seven 12th-generation Core HX laptop chips at the Intel Vision event Tuesday, where the company also revealed AI chips meant to challenge Nvidia and a roadmap for its fledgling product line of infrastructure processing units for datacenters.

These latest Core chips are expected to power more than 10 laptops coming out later this year from Dell, HP, Lenovo, and other PC makers, and they are based on the same Alder Lake hybrid architecture that debuted with Intel's 12th-gen Core S-Series processors for desktop PCs last fall.

What makes the 12th-gen HX chips different from other Alder Lake laptop processors that came out earlier this year is that they are said to be more powerful and come with features that are geared toward heavy-duty users, such as PCIe 5.0 connectivity, error-correcting code memory and RAID support. Like other processors in the broader 12th-gen lineup, select models include Intel's vPro enterprise-level management and security features.

The HX chips consist of a total of seven Core i5, i7, and i9 models, and they feature up to 16 CPU cores — split between eight performance cores and eight efficient cores — a 5GHz max turbo frequency, a 2.3GHz base frequency, and a 30 MB L3 cache. For integrated graphics, the chips feature up to a 1.55GHz max graphics unit frequency, and all but one of the models pack 32 execution units.

But in exchange for the high performance and advanced features, the processors require a great deal of power. The base power for all the latest chips is 55 watts, and it can go up to 157 watts to squeeze every ounce of performance out of the silicon. This is higher than the power envelope for the regular 12th-gen H-Series processors, which have a base power of 45 watts and a turbo power of 115 watts. 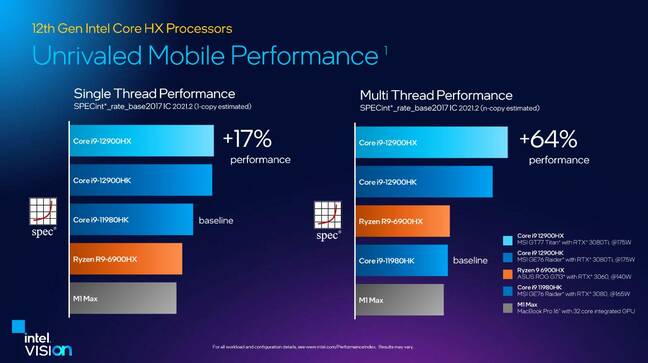 A slide showing how Intel's Core i9-12900HX allegedly compares to other processors across single-threaded and multi-threaded performance benchmarks. Click to enlarge.

Intel alleged the Core i9-12900HX is faster than the best laptop silicon from AMD and Apple. Specific benchmark figures were not provided for the tests it performed, though Intel shared various performance comparisons [PDF] that put its flagship chip above Apple's M1 Max and AMD's Ryzen 9 6000 H-Series chips across multiple tests. 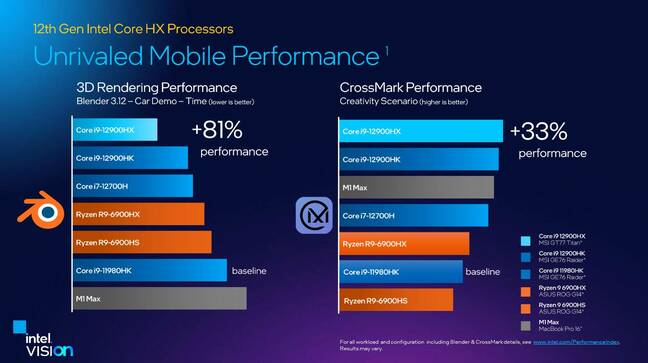 A slide showing how Intel's Core i9-12900HX allegedly compares to other processors, including those from AMD and Apple, across Blender and CrossMark benchmarks. Click to enlarge.

"With the new core architecture and higher power limits of 12th-gen Intel Core HX processors, we're enabling content creators to tackle the most demanding workflows like never before – for example, executing 3D renders in the background while continuing to iterate on other 3D assets in the scene," said Chris Walker, head of mobility client platforms at Intel. ®