Latest version of Red Hat's free distro family arrives, a day after the paid one

And let it be known that there's a lot more to Fedora 36 than just the well-known distribution, with its different desktop spins.

There are multiple parallel products under the Fedora banner, and they've all got new versions out, too.

The default desktop is GNOME 42, accompanied by spins with KDE, Xfce, LXQt, MATE, Cinnamon, LXDE, Sugar, and i3.

There were a few delays before the release, but that's not so unusual with Fedora releases. We covered the highlights of what's new when we looked at the beta back in March and that still holds true now. The release version isn't massively different, and the release notes and changeset give all the details. 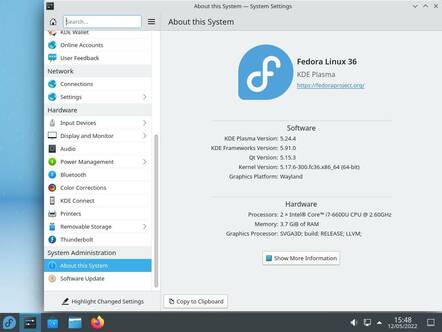 As well as Workstation, there is also Fedora Server, which has no graphical desktop (although you can install one if you want) but offers Modularity – parallel installations of different component versions.

Alongside them is Fedora IoT, which has been its own edition since Fedora 33. Like openSUSE Kubic, SLE Micro, and Ubuntu Core, this is a small, lightweight (3GB disk, 1GB RAM) distro with transactional software installation and updates.

This means that the root filesystem is read-only, and updates are via ostree. It runs on x86-64 and some selected Arm SBCs.

Speaking of transactional software, Fedora Silverblue version 36 is also out. Silverblue is a desktop distro, but it uses the same sort of transactional installation system as the IoT edition. The root filesystem is read-only, the only way to add new software is via Flatpaks, and it doesn't have a conventional package manager at all.

Silverblue is based on GNOME, just like the primary version. If you're not a GNOME fan, there is also a KDE-based immutable version of Fedora, called Kinoite.

Both Silverblue and Kinoite can trace their ancestry to CoreOS, which Red Hat acquired in 2018. Fedora CoreOS is another, separate project, although for now its stable version is still on 35: version 36 is available in the testing and next streams.

Finally, we ought to mention Fedora Rawhide, even though it doesn't have specific versions. Rawhide isn't a release as such, but it is an option. It's Fedora's equivalent to Debian "Sid": a continuously-changing snapshot of the work-in-progress next version of the distro. It's not exactly a rolling-release like Arch Linux or even the new Ubuntu rolling rhino, but if you want the latest and greatest versions of everything, it's there for you. 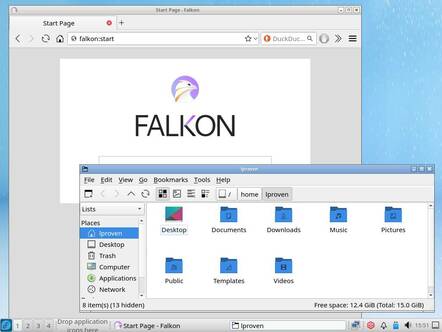 There's a lightweight version with LXQt and only essential apps preinstalled

One reason we specifically mention Rawhide is to talk about disk formats. Fedora defaults to formatting the hard disk with Btrfs, as it has since version 33, but it's worth noting that this doesn't confer much benefit yet.

Much like Fedora Silverblue, both Canonical with Ubuntu Core and SUSE with Kubic and MicroOS are experimenting with immutable distros. The difference is that they are using copy-on-write (COW) filesystems: Btrfs for SUSE and ZFS for Ubuntu.

One of the big benefits of a COW-capable filesystem is that it makes it very fast to create snapshots: essentially, the OS can say "make a snapshot of this directory at this point", and the filesystem automatically and invisibly starts redirecting any changes to those files to new, separate copies.

The idea is that if an update goes wrong and something stops working, then you can just reboot and revert back to an older snapshot in which everything worked. This works via a tool called Snapper in SUSE distros, and Ubuntu is working on something similar, although neither this nor ZFS are enabled by default yet.

In SUSE distros, including both openSUSE Leap and Tumbleweed, if an update goes wrong, you can pick an older snapshot in the GRUB boot menu and immediately bring your computer back to life. Then you can either just continue working, or if you have the time, troubleshoot what went wrong. This is the big feature that makes Tumbleweed so usable as a rolling-release distro.

It would be easy to conclude that because Fedora now uses Btrfs, that automatically brings it to parity with openSUSE, but that's not the case. Fedora has no snapshot support at all by default. You can enable it, but it's not trivial, and as Fedora keeps its /boot directory in a separate partition formatted with plain old ext4, it won't automatically include kernels. If you want that too, it's a significant task.

Without it, there isn't really any significant benefit to using Btrfs. RHEL doesn't include Btrfs at all, nor ZFS, which is why it had to develop OSTree: to deliver snapshot-like functionality on non-COW filesystems. Since it's spending money and effort on that – and special OSTree-based editions such as Silverblue, Kinoite, and Fedora IoT – this effectively means less reason to work on snapshot support on Btrfs.

Indeed, not only is there no gain from using Btrfs, there are potential costs. Btrfs can be fragile, which is why SUSE has a whole page on how to recover from errors, complete with the worrying line:

WARNING: Using '–repair' can further damage a filesystem instead of helping if it can't fix your particular issue.

This is why the new bcachefs filesystem uses the strapline "The COW filesystem for Linux that won't eat your data".

Btrfs is less of an issue on a server, such as a SLE box, probably protected by a UPS – but Fedora is predominantly a desktop and laptop distro, and as such, Btrfs is potentially a liability rather than a benefit. Because Red Hat has its own next-gen filesystem effort, Stratis, Fedora is unlikely to adopt bcachefs in the foreseeable future.

Overall, as we said of the beta, Fedora 36 is a solid, mature distro. The lack of stable releases, unlike Ubuntu LTS or openSUSE Leap, mean it's not the most boring, safest choice – we note, for instance, that Slack no longer supports Fedora. GNOME fans who enjoy customizing their desktop might also want to be wary of self-updating extensions. Unlike Ubuntu, each version gets updates until a month after the release after next, so when you upgrade, you can skip a version. An annual upgrade cycle isn't so bad.

The Reg FOSS desk feels that in some ways, the interesting stuff is happening with modularity in the Server edition, and with the immutable filesystems of the IoT, Silverblue, and Kinoite editions.

We gave Kinoite a short test-drive, and at GUI level, it feels just like any other distro. It's fast and responsive, and you can add graphical apps from the Software Centre just like a normal distro. The differences are only apparent at the command line: there's no dnf command, no package manager at all, and even the superuser can't make a new directory in the root folder. 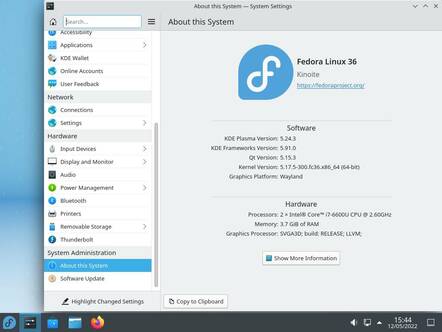 A read-only root filesystem means that these editions should be more robust, safely immune to problems such as sudden power outages, unlike any other mainstream distro. It might be a shock to the system for a more experienced Linux power user, accustomed to popping open a shell and customising their installation, to find that they can't.

But this is probably the future of Linux distributions, and Fedora, more than any other mainstream distro, is delivering the first taste. ®