We speak to scientists involved in historic first snap – and no, this isn't the M87*

Astronomers have captured a clear image of the gigantic supermassive black hole at the center of our galaxy for the first time.

Sagittarius A*, or Sgr A* for short, is 27,000 light-years from Earth. Scientists knew for a while there was a mysterious object in the constellation of Sagittarius emitting strong radio waves, though it wasn't really discovered until the 1970s. Although astronomers managed to characterize some of the object's properties, experts weren't quite sure what exactly they were looking at.

Years later, in 2020, the Nobel Prize in physics was awarded to a pair of scientists, who mathematically proved the object must be a supermassive black hole. Now, their work has been experimentally verified in the form of the first-ever snap of Sgr A*, captured by more than 300 researchers working across 80 institutions in the Event Horizon Telescope Collaboration. 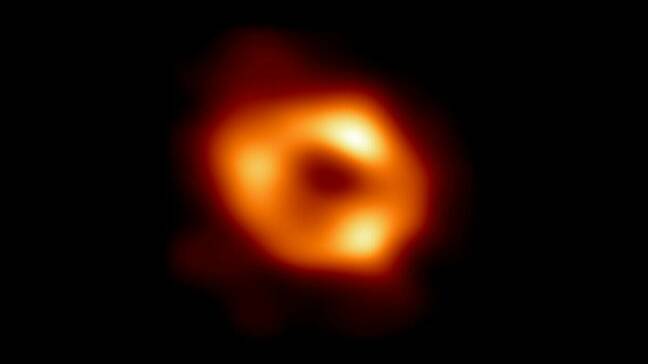 Doesn't look that gigantic to us ... The pic of Sagittarius A*. Click for much bigger. Source: EHT Collaboration

This gathering of somewhat blurry orange blobs may not seem impressive at first glance, but the shape and structure are hallmark signs of a supermassive black hole: a circular, doughnut-shape; the inner hole marks the edge or event horizon and is surrounded by a glowing ring of radiation.

Eight ground-based telescopes located around the world were used to capture light from Sgr A* starting in 2017. Researchers gathered 3.5 petabytes of observations and fed that into complex image-processing algorithms running on supercomputers to construct the image. The data from these telescopes have to be carefully compared and processed; scientists have to take into account factors such as instrument position and the rotation of the Earth to build up a stable, direct image.

"The mass and distance of the object were known very precisely before our observations," said Luciano Rezzolla, professor of Theoretical Astrophysics at Goethe University Frankfurt, this week.

"We thus used these tight constraints on the size of the shadow to rule out other compact objects – such as boson stars or wormholes – and conclude that: 'What we're seeing definitely looks like a black hole.'"

Rezzolla said constructing the image from the telescopes is like trying to form a photo of a mountain peak from a series of time-lapse images; as clouds roll by and the Sun rises and sets, the peak is changes from shot to shot. The mountain peak in this case is a supermassive black hole is not only far, far away and tiny but also invisible.

Richard Anantua, an assistant physics and astronomy professor at the University of Texas at San Antonio, described the algorithms applied to the telescope observations. "In order to convert sparse data into images, we use established methods like the CLEAN algorithm for removing the point spread function of the beam intrinsic to the observing instrument," he told The Register. "We also confirm our images by maximum likelihood methods including priors for smoothness, sparseness and maximum entropy."

This code was run on various supercomputer clusters. "We have used a wide variety of research computing facilities – both connected to EHT-affiliated universities and other institutions. Some of the facilities primarily used include the Black Hole Cluster at the University of Illinois Urbana-Champaigne and the Texas Advanced Computing Cluster and the Open Science Grid," he added.

Sgr A* looks very similar to M87*, a 6.5-billion-solar-mass supermassive black hole located in the M87 galaxy 50 million light-years away. Scientists reckon both images taken by the EHT Collaboration indicate all types of black holes look similar to one another regardless of their size since they're governed by the laws of Einstein's general theory of relativity.

"We now have a consistent image that looks like general relativity is working on both ends of supermassive black holes," said Kazunori Akiyama, a research scientist at MIT's Haystack Observatory.

Armed with these pictures, astronomers can now compare both objects to learn more about supermassive black holes and their effects. "We are now dealing with images from a population of black holes, so we are in a position to study black hole demographics. Both images have global ring structures, but only M87* has an azimuthally lopsided profile. Sgr A* has patches of coherent flux uniformly distributed throughout the ring," Anantua told us.

Boffins in the ETH Collaboration have their eyes on several supermassive black holes they believe they can image, such as the possible binary OJ 287 object, 3.5 billion light-years away, Anantua said.

The research from the ETH Collaboration detailing everything from Sgr A*'s shadow, mass, and shape, to how the image was snapped and processed has been published across numerous academic publications listed here. ®