Cars in driver-assist mode hit a third of cyclists, all oncoming cars in tests

Autonomous cars may be further away than believed. Testing of three leading systems found they hit a third of cyclists, and failed to avoid any oncoming cars.

The tests [PDF] performed by the American Automobile Association (AAA) looked at three vehicles: a 2021 Hyundai Santa Fe with Highway Driving Assist; a 2021 Subaru Forester with EyeSight; and a 2020 Tesla Model 3 with Autopilot.

According to the AAA, all three systems represent the second of five autonomous driving levels, which require drivers to maintain alertness at all times to seize control from the computer when needed. There are no semi-autonomous cars generally available to the public that are able to operate above level two. 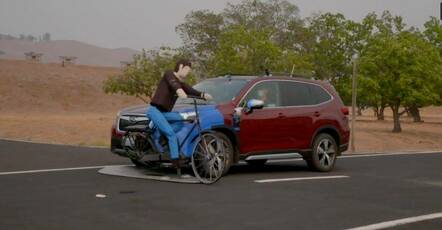 A semi-autonomous car hits a test dummy on a bicycle during testing ... Source: AAA

The first two scenarios evaluated adaptive cruise control (ACC), which decelerates or brakes a vehicle in response to slower or stopped objects ahead. All three vehicles detected their vehicle and cyclist targets and were able to match speed or stop in response.

The AAA said that their tests of ACC systems were encouraging and supportive of "previous AAA research concluding that the ACC component of ADA systems are well-developed and perform according to expectations for typical closed-course scenarios and naturalistic driving environments," the report reads.

In tests involving an oncoming car passing into the lane of the ADA-enabled vehicle, only one, the Tesla Model 3, detected the oncoming car and slowed the vehicle, but still hit it.

To make matters worse, the AAA said the head-on test was performed at "unrealistically low vehicle speeds" in which the ADA vehicle was moving at 15mph (24kph), and the target vehicle at 25mph (40kph).

Were the tests done "at higher speeds characteristic of rural two-lane highways, it is unlikely that evaluated ADA systems would provide meaningful mitigation in the absence of driver intervention," AAA wrote in the report.

Greg Brannon, AAA's director of automotive engineering, said that the ACC tests were encouraging, but the head-on test should be enough to give drivers pause: "A head-on crash is the deadliest kind, and these systems should be optimized for the situations where they can help the most."

The response to collisions with cyclists was a bit more encouraging, but not by much. Instead of all three vehicles smacking into the cyclist without slowing, only the Subaru failed to detect and struck the cyclist in each of the five test runs.

The driver of the ADA-enabled vehicle reached a predetermined speed in each scenario, engaged the system, and allowed the vehicle to hit, or avoid, its target without making any action to slow, stop or swerve. The cyclist and vehicle targets were both lightweight and designed to be harmless to the test vehicle and driver.

From its work, the AAA concluded that ADA systems are incapable of operating without continual driver supervision, contrary to what it said is misleading marketing material on the part of auto manufacturers. The AAA said that a 2018 survey it performed found that 40 percent of consumers believed names like "Autopilot" indicated the vehicle was capable of fully autonomous driving.

On the one hand, driver-assistance software is just that: a tool for attentive human drivers, and should not be used or relied upon as a true self-driving system; on the other hand, poor performance of level-two driving systems had better not be indicative of the safety performance of higher levels. And complicating this issue is some of the marketing around driver-assistance technology already painting it as a no-hands, competent solution.

"Drivers tell us they expect their current driving assistance technology to perform safely all the time," Brannon said. "But unfortunately, our testing demonstrates spotty performance is the norm rather than the exception." ®