Bill McDermott thinks companies need workflow on top of enterprise apps, whether they replace them or not

Interview In a month that has seen nearly a fifth wiped from his company's share price, Bill McDermott is remarkably cheerful.

For context, it is not just ServiceNow that is getting a rocky ride. Some estimates suggest Big Tech stock has lost $1 trillion in value in the last week, with all the big players down.

But McDermott's pitch for ServiceNow – the workflow software company which grew out of an IT helpdesk vendor – is that it will be different: the "defining enterprise software company of the 21st century," as he put it on one investors' call. 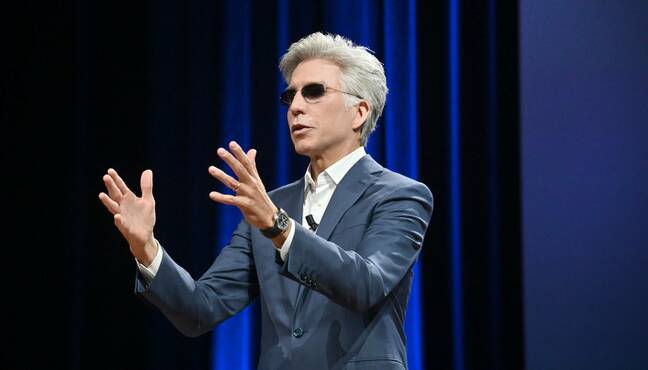 One of the reasons McDermott is so optimistic about his chances in this market is because of the positioning of the biggest players. SAP and Oracle dominate the market, although there are other enterprise application vendors, but they are leaving behind a massive population of users on their ageing systems.

While SAP is struggling to get its ERP users from ECC to S/4HANA, Oracle is challenged with getting customers from E-Business Suite (EBS) to Fusion – its cloud-based software-as-a-service offering.

Research from Oracle and SAP support company Spinnaker found that the majority of customers on Oracle's on-prem E-Business Suit were satisfied, while 39 percent of respondents expect to be using EBS "indefinitely."

Despite revenue for SAP S/4HANA cloud increasing 78 percent compared with the year-ago quarter, German-speaking SAP user group DSAG has found the proportion of organizations to which S/4HANA was relevant to their SAP investments fell to 50 percent in early 2022, down from 56 percent the previous year.

According to Gartner figures from 2021 of SAP's 35,000 existing ERP customers, only 26 percent had bought anything to do with S/4HANA. Meanwhile, only 14 percent had actually gone live with the software.

But these Oracle and SAP customers want to give their business users a better experience than the clunky old gray-screen environments, desktop dialog boxes, and what McDermott termed "swivel-chair" integration. And this is where ServiceNow comes in.

"SAP and Oracle's architectures have been established. However, they are something very different to what ServiceNow does. ServiceNow resides above the architecture of Oracle and SAP and many of the other big [application] companies," he explains.

ServiceNow claims to offer a person-focused view of tech – rather than focus on a business department. So, for onboarding new employees, that might mean introducing them to payroll, HR, performance management systems, but also IT and security. These processes have been captured in disparate systems that can be difficult to navigate. To save time, ServiceNow can create an integrated workflow on top of that to ease the experience and present it in a phone app or web interface.

"Businesses are still using swivel chairs [between apps], spreadsheets and emails to communicate across departments, and in ServiceNow everything is digitized into an automated workflow, where there are no more spreadsheets and swivel chairs and departments that can communicate very well with each other. On the ServiceNow platform, all that work is automated," McDermott says.

That explains ServiceNow's appeal to IT departments that deal with a vast estate of legacy applications they sometimes have a secret cry over in the janitor's closet.

Switch to an automatic

But this story of workflow and automation sounds familiar because Oracle and SAP also have stories to tell in this department.

ServiceNow's recent announcement with comms giant BT is a case in point. The UK-based telecoms and IT services group is replacing 56 legacy workflow systems used by support teams and is forecast to make around $30 million (£25 million) savings in five years. But BT is also in the process of rolling out SAP S/4HANA for its financial processes and payroll and HR system SAP SuccessFactors and SAP Fieldglass to transform learning, talent acquisition, and management of contingent workers.

ServiceNow has expressed a desire for BT to implement its workflow in these areas, even though it is not part of the current project. But wouldn't SAP be first in the queue to implement its automation and workflow technology because it already owns such a large chunk of the enterprise estate? To broaden the argument, as Oracle and SAP gradually get customers onto their latest technology, ServiceNow's opportunities shrink.

Not so, McDermott says.

Firstly, there are always more applications out that that need integrating with a workflow layer on top. McDermott claims that 750 million net new applications will be built or introduced by businesses in the next three years, more than have been developed in the last 30 years.

Because the entrenched enterprise application vendors do not address this problem it will be an opportunity for ServiceNow to build a "super productive" layer to "increase productivity" by linking applications together from a users' perspective.

Secondly, as enterprise application vendors move customers to the SaaS system, they ask them to get rid of coded customizations that have been built into the system – perhaps over decades – to accommodate changing business processes.

As Oliver Betz, SVP head of product management for SAP S/4HANA, told customers in late 2020, they will not be allowed the modifications they have in the on-premises world when they move to software-as-a-service. "That's not how the cloud works," he said at the time.

The statement implies a vast and costly business process change for some organizations, and giving up processes they have built up over the years.

"All the customizations that have been built into these ERP systems over the last half century have been hard earned. People spent millions and millions [of dollars] on it," says McDermott, who as a former CEO of SAP might know something about ERP implementations.

But with its acquisition of Gekkobrain, the Denmark-based company which specializes in analyzing custom code, ServiceNow is promising to help businesses retain their favored business processes during an ERP migration.

"Now we can study the custom code and move the custom code that the customer wants to keep into the automation layer of ServiceNow. There's a whole world happening above the systems of record. And this world is innovative. It's building real-time applications. Moving forward customization that customers want to keep and letting customers do their processes their way," McDermott says.

"The problem when you shrink-wrap software and you ship it is you can never anticipate the many changes in an ever-changing fast-moving world. The world changes by the time you ship the software. But in our case, because it's in the cloud and it was designed for custom work and designed for specialized application development, it's just such a different universe. And that's why we'll be the defining enterprise software company the 21st century," he says.

McDermott also points to ServiceNow's partnership with Celonis, the German process mining company in part born out of SAP projects. His company has poured hundreds of millions of dollars into the relationship because it allows organizations to "X-ray" their processes and have them replicated or reimagined in the service layer, he says.

None of this means ServiceNow replaces the ERP or other systems of record. But it is giving users who face tough and costly decisions about the future alternatives to monolithic upgrades food for thought, and at the same time perhaps reducing the influence of the incumbent ERP giants on the market. ®