After nearly a decade of planning and five years of construction, Google is cutting the ribbon on its Bay View campus, the first that Google itself designed.

The Bay View campus in Mountain View – slated to open this week – consists of two office buildings (one of which, Charleston East, is still under construction), 20 acres of open space, a 1,000-person event center and 240 short-term accommodations for Google employees. The search giant said the buildings at Bay View total 1.1 million square feet. For reference, that's less than half the size of Apple's spaceship.

The roofs on the two main buildings, which look like pavilions roofed in sails, were designed that way for a purpose: They're a network of 90,000 scale-like solar panels nicknamed "dragonscales" for their layout and shimmer. By scaling the tiles, Google said the design minimises damage from wind, rain and snow, and the sloped pavilion-like roof improves solar capture by adding additional curves in the roof.

The roof may be the most noticeable environmental feature, but Google said the site has several green features, including:

Google claimed its design would reduce water needs for cooling by 90 percent, and with its solar roofs and a nearby wind farm, the power used by the campus will be carbon-free 90 percent of the time.

Google isn't the only company to have invested in a custom-designed campus right around the time leading up to the COVID-19 pandemic. Apple did so too, and it made clear during the pandemic that it wasn't going to let that investment go to waste. Employees would be coming back.

Now, a little under a year later, Apple is being faced with rebellion from employees unhappy with the company's return to office plan, which called for employees to spend a minimum of  three days in the office per week beginning in late April. Apple reportedly lost one of its top AI experts over the policy as well. It reportedly told staff that by May 23, it wants them in at least three days a week: Mondays, Tuesdays and Thursdays. 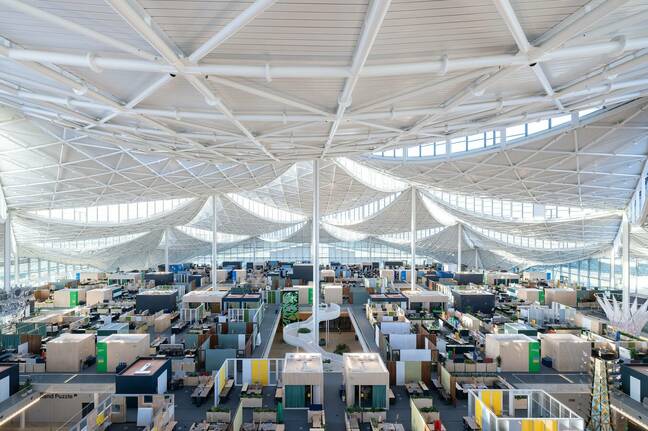 The interior of Bay View's main building. Feel productive yet?

Google has been trying to get employees to return to office for just about as long as Apple has, but its efforts, like those in Cupertino, were repeatedly delayed. In March, Google said it wanted employees back in the office three days a week by April 4, and with that newly completed campus open, it's sure to want them back even more.

Whether working under a cavernous roof in a building while readjusting to life in the office will result in an Apple-like rebellion remains to be seen. ®