Analysis Here's something that would have seemed outlandish only a few years ago: to help fuel Intel's future growth, the x86 giant has vowed to do what it can to make the open-source RISC-V ISA worthy of widespread adoption.

In a presentation, an Intel representative shared some details of how the chipmaker plans to contribute to RISC-V as part of its bet that the instruction set architecture will fuel growth for its revitalized contract chip manufacturing business.

While Intel invested in RISC-V chip designer SiFive in 2018, the semiconductor titan's intentions with RISC-V evolved last year when it revealed that the contract manufacturing business key to its comeback, Intel Foundry Services, would be willing to make chips compatible with x86, Arm, and RISC-V ISAs. The chipmaker then announced in February it joined RISC-V International, the ISA's governing body, and launched a $1 billion innovation fund that will support chip designers, including those making RISC-V components.

How Intel plans to contribute to RISC-V

At RISC-V Week in Paris this month, Gary Martz, senior director of RISC-V ecosystem enablement for Intel Foundry Services, said Intel plans to make additional "substantial contributions" to the system-on-chip architecture and software stack for RISC-V as part of its RISC-V International membership.

"Our intention is that with these contributions along with the innovation fund, we'll help drive an ecosystem [that] will continue to fuel the growth of RISC-V and the adoption of RISC-V cores," he said at the event.

Martz added Intel "will help evaluate the current gaps and will contribute resources to drive closure where we can help," referring to the fact that RISC-V right now lacks many features found in the x86 and Arm ISAs that are important to gain traction in markets like PCs and servers.

On the SoC side, Martz said Intel will contribute in areas like boot security, firmware resilience, partitioning, isolation, virtualization, and performance monitoring. He said the company's contributions will also focus on fabrics infrastructure for multi-core chip architectures, standard internal buses for various bus types, and holistic debut solutions and interfaces. 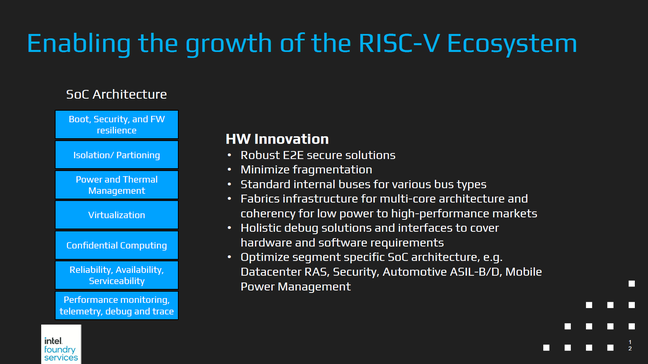 A slide showing some of the areas Intel plans to make hardware contributions for RISC-V. Click to enlarge.

As for software, Martz said Intel will focus "on the core portions of the stack that have to be compatible across vendors." Another slide provided by Martz laid out various elements in the RISC-V software stack, ranging from compilers and optimizers to hypervisors and applications.

In making contributions, Martz said Intel wants to "minimize the fragmentation" in RISC-V, an important issue that could hurt the ISA's adoption if there is too much variance in features among various chips.

The way we see it: to succeed, the RISC-V ISA needs to be consistent and stable across platforms so that applications and software stacks can be widely deployed without having to work around chips' idiosyncrasies; installing and running Linux, say, on RV should be as simple as doing so on x86.

This means rather than relying on individuals who contribute to the ISA in their free time, RISC-V International hopes that companies will increasingly invest employee resources into RISC-V, much in the same way that many of them do now for Linux and other open-source software projects. 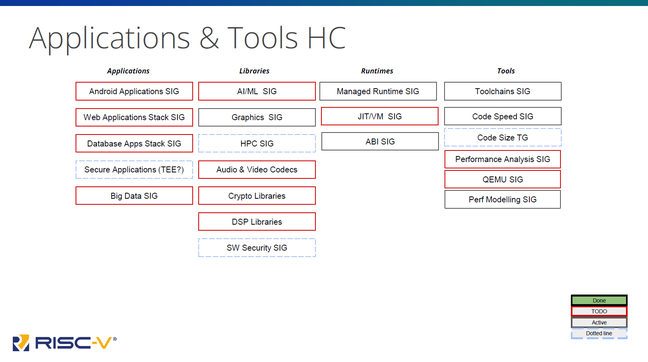 A slide showing some of the various special interest groups working on different aspects of RISC-V. Click to enlarge

RISC-V International already has dozens, if not hundreds, of corporate members, including Alibaba Cloud, Google, Western Digital, IBM, Nvidia, Samsung, and many more, though Himelstein indicated that the nonprofit needs more companies offering their employees' time.

"We want this to be done not by people that are paid by RISC-V International, but by people who are part of the community and are excited about doing it the same way they are about Linux or Hadoop or Apache and so on and so forth," he said.

This is important because RISC-V International faces a staggering amount of work in developing much-needed features that will give RISC-V a fighting chance in markets like servers and PCs.

Himelstein said RISC-V International's work on the ISA now encompasses more than 70 groups and committees who are focused on different software and hardware aspects of RISC-V that are in progress.

"We need your voices at the table. That's really, really important," he said.

A standards background likely a good thing for RISC-V

Given the need for standardization in RISC-V, Martz is an interesting person to lead Intel's ecosystem enablement efforts for the ISA.

That's because he said he has been involved in multiple standards initiatives at Intel: representing the company in the Wi-Fi Alliance, building a standards organization for consumer Internet-of-Things, and most recently leading a standards group for industrial IoT.

"I'm supposed to help identify friction in the market, do things to remove that friction, allow the market to rapidly expand, sockets proliferate, and then my buddies on the sales side go and compete for the sockets," he said during his RISC-V Week talk.

Martz said the goal of his RISC-V enablement job at Intel Foundry Services is a little different, though very much focused on standards.

"We want the sockets to proliferate, but then we want to build silicon for the ecosystem that's going to go compete to populate those sockets," he said.

Ultimately, Intel hopes to create new business opportunities for Intel Foundry Services, which will basically manufacture RISC-V chips for anyone who asks and can pay.

Given that RISC-V CEO International Calista Redmond recently told us she views companies like Intel as critical to the ISA's future success, it seems that Intel and RISC-V have entered into quite the symbiotic relationship. ®