Pic As Apple and Qualcomm push for more Arm adoption in the notebook space, we have come across a photo of what could become one of the world's first laptops to use the open-source RISC-V instruction set architecture.

In an interview with The Register, Calista Redmond, CEO of RISC-V International, signaled we will see a RISC-V laptop revealed sometime this year as the ISA's governing body works to garner more financial and development support from large companies.

It turns out Philipp Tomsich, chair of RISC-V International's software committee, dangled a photo of what could likely be the laptop in question earlier this month in front of RISC-V Week attendees in Paris. 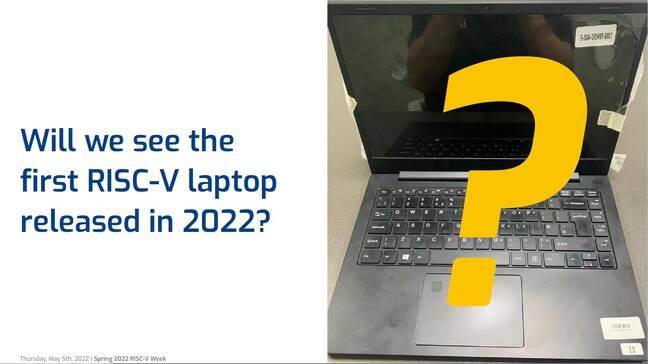 A slide from the RISC-V Week event in Paris teasing a potential RISC-V laptop coming in 2022 ... Click to enlarge.

Tomsich teased the device at the end of a talk with Mark Himelstein, CTO of RISC-V International, about the software optimization work needed to mature the RISC-V ecosystem.

"The big question that everybody is asking themselves, and the one where I'm wondering, Mark, if we'll be able to pull this off: will we see the first RISC-V laptop announced this year?" Tomsich said as he showed a picture of a black, brandless laptop that had a large question mark over it.

Tomsich then hinted at the potential specs of the laptop:

So there's a mystery laptop pictured on the right, and I'll just leave you all with the question: might there be RISC-V in this one already, and are we going to come to conclusion this year, even with the chip shortage and everything, on getting RISC-V, multi-core, 2 GHz-class support onto our laptops?

Tomsich shared the photo of the mystery PC while promoting a few milestones for RISC-V, including the March launch of the first portable RISC-V computer, modeled after Kyocera's classic TRS-80 Model 100 "slab" computer from 1983. Tomsich also hailed Alibaba Cloud for getting Android 12 to work on its own RISC-V silicon, and RISC-V compiler support for Java through OpenJDK.

What could the RISC-V laptop be for?

We were able to extract the image of the mystery laptop from the slide to get a slightly closer look: 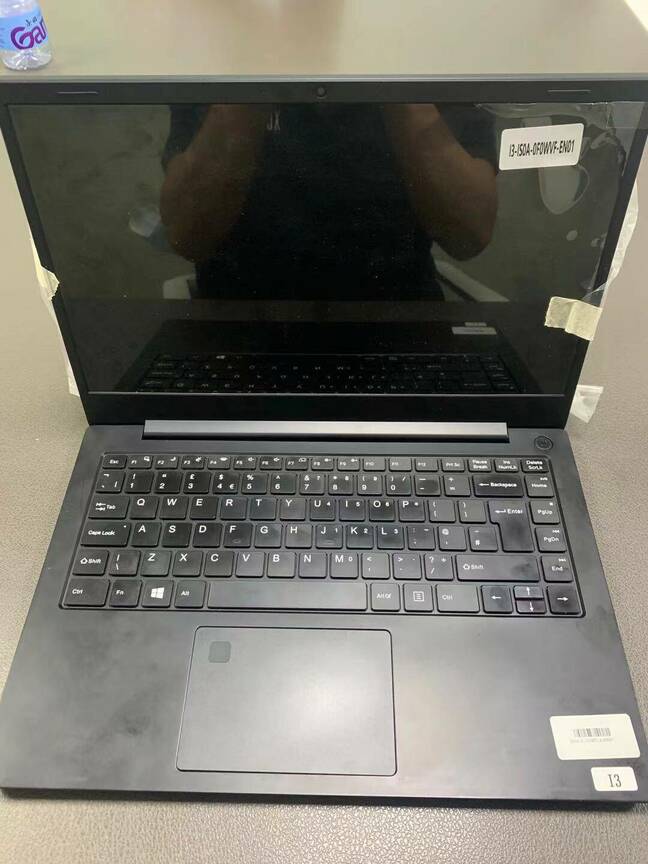 A photo of what could be a RISC-V laptop, as shown at the RISC-V Week event in Paris. Click to enlarge.

Unfortunately, there's not much we can discern from this photo. The device itself looks fairly rough, pretty much a prototype, which means the laptop is likely being used for development and testing purposes.

However, there was one interesting detail that caught our attention: the bottle in the top-left corner of the photo. We learned from a quick Google search that this is a water bottle brand in China called Ganten. 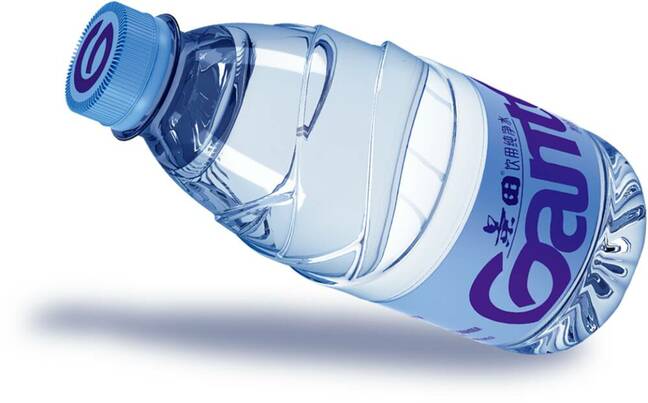 A bottle of Ganten water from China ... Source: Ganten's website

Now, normally we wouldn't care much about seeing a bottle of water, but we do know that, as of last summer, the Institute of Software at the Chinese Academy of Sciences (ISCAS) was planning to build 2,000 RISC-V laptops by the end of 2022 as China looks to reduce its reliance on foreign tech giants like Arm and Intel amid ongoing tensions with Western countries.

Does this mean the mystery laptop is being developed by ISCAS? It's too soon to say. There could be other RISC-V laptop developments in China, though the ISCAS project is the only one in the country El Reg knows of so far.

The only other public RISC-V laptop development we're aware of is one in Russia, which is expected to have homegrown RISC-V laptop chips ready for devices by 2025, according to a report from last year. The country is now cut off from Arm and Intel due to its invasion of Ukraine, so RISC-V is probably its best option now due to the ISA's borderless nature.

As for RISC-V laptops popping up elsewhere in the world, we shouldn't expect commercial products for a while – though if you know of any, or can identify the machine above, please do let us know. We're also more than aware of the RISC-V boards out there for developers.

Patrick Little, the CEO of RISC-V chip designer SiFive, told us earlier this year he doesn't think system-on-chips using the company's CPU blueprints will find their way into PCs until roughly late 2025.

There's also the fact that much work is needed for the RISC-V ISA to provide the same level of software support and cross-platform stability that x86 and, to a somewhat lesser extent, Arm, provide for PCs now. ®