For tiny Venn diagram wedge who want the feel of a mechanical keyboard plus, er, emoji keys

Its design is reminiscent of an old-school typewriter, with rounded keycaps on thin pillars. To assuage the fears of purists, Logitech claims each actuation delivers the same kind of delectable clickiness as your granddad's old Olivetti.

Another thing: It ditches the numpad in favor of dedicated, swappable emoji keys. Gimmicky, yes, but is the keyboard any good?

Typewriters were heavy, bulky things. Sure, they were portable, but only if you accepted the risk of serious back trauma. By contrast, the Logitech Pop is small and light. Chuck it in your backpack, and you'll barely notice it's there. You can also buy third-party carry cases – which may prove a wise investment for reasons that I'll come to later.

Underneath the keyboard sits the battery compartment, which also hides the USB dongle. The Logitech Pop uses standard AAA batteries, with a claimed 36-month battery life. For obvious reasons, we haven't tested this independently. We imagine this figure varies depending on your usage and whether you fork out for Duracell's more salubrious cells.

In keeping with many of Logitech's premium (read: pricey) wireless keyboards, the Pop lets you connect your keyboard to three separate devices and switch between them with a set of dedicated hotkeys. It supports standard Windows and macOS layouts, and switching between operating systems is accomplished with minimal fuss.

Rather than include separate macOS and Windows keycaps, as many vendors choose to do, Logitech opted to print both variants of the shortcut keys. So the "opt" key doubles as the "start" key. The "cmd" key shares space with the left "alt" key, and so on. 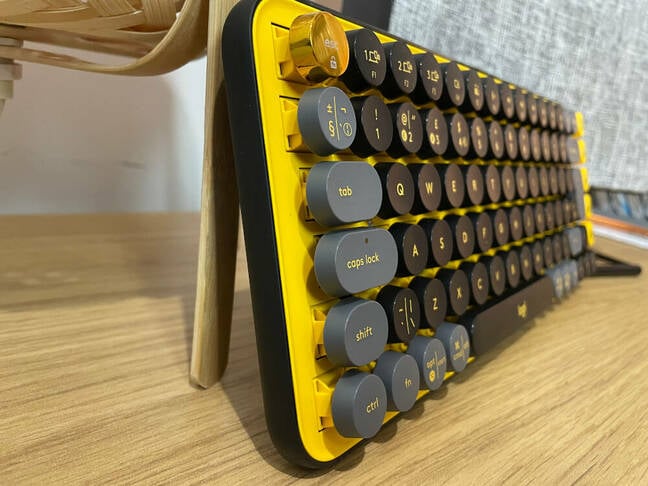 Logitech has placed four dedicated emoji keycaps on the furthest right of the keyboard. A further four are included in the box. Using the included software (available for both Windows and Mac), you can change these to an emoji of your choosing, but there's a possibility they may not correspond to the keycap. Another dedicated key brings up the operating system's emoji catalog, giving potential access to all 3,633 Unicode emojis. 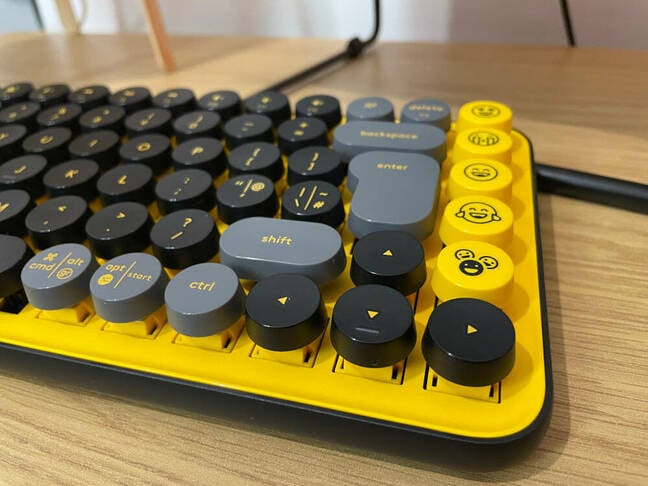 Smile, you've got emojis on your keyboard

Realistically, this won't concern a decent chunk of the keyboard-buying public so Logitech lets you remap the dedicated emoji keys to custom shortcuts or combinations. Frustratingly, these aren't saved locally to the keyboard, but rather on the computer.

Have you ever used a typewriter? Most were sturdily built and designed for long writing sprints. They take a bit of getting used to – especially if you've only previously used a computer keyboard – but when you get into the right cadence, they're delightful.

The Logitech Pop, unfortunately, doesn't really capture that. Its biggest weaknesses are the result of compromises made to build something easily luggable that attempt to capture the retro typewriter aesthetic.

Logitech redeems itself somewhat in the typing experience. There's a decent amount of key travel with each actuation, making every keypress feel deliberate, but there isn't much of a "bump." The sound that accompanies each keystroke also disappoints, in part due to Logitech's use of TTC Brown keyswitches, rather than a "clickier" Blue keyswitch.

The biggest nail in the Logitech Pop's coffin is arguably the dismally flat keycaps, which aren't particularly comfortable or satisfying to use for any length of time.

We felt conflicted about the Logitech Pop. It gets a lot of things right and despite its warts, has a certain charm.

It's light and has wireless connectivity. Although impractical in many ways, it has a genuinely fun and interesting design. This writer bought it for one reason – I needed a decent travel keyboard that surpasses the one built into my laptop – and it delivered.

But it has its downsides. The typing experience leaves a lot to be desired. The emoji keys are a gimmick that may appeal to Gen Z, but won't satisfy those looking for a work keyboard. The decision to use a Cherry MX Brown-derivative rather than a louder Cherry MX Blue feels like a missed opportunity, particularly given that it aspires to be a modern-day typewriter alternative.

Additionally, the proprietary nature of the keycaps means you've got to be careful when travelling with it. If one breaks, you may struggle to find a replacement. Fortunately, you can probably find a hard-shell carry case online for around $30. I found one with enough room for the companion mouse, sold separately for $40.

Logitech has tacitly angled the Pop as an unimposing introduction to the world of mechanical keyboards. Even then, it's hard to enthusiastically recommend it. For the same price, you can get the excellent Keychron K6, which is a far superior typing workhorse. But if you're still curious, you can pick one up here.